Hello!
I recently took a trip down to Warhammer World to play a game on their Warlord Titan board with my Orks vs... my Orks ! Orks vs Orks is always a bit of a wild ride, so it was bound to be a bloody one! My opponent was Grijbog (another member of the Old Wolves group) over here on holiday from Australia. As such, he didn't have an army with him so I lent him one, and we decided Orks vs Orks would happen.
We played with the Tempest of War cards, but rather than randomly choosing a primary mission we picked some appropriate cards. We went for a classic 'dawn of war' deployment, a twist to have an additional objective marker - placing all four no man's land ones around the fallen titan, and the mission Priority Targets - giving 5 points for holding an objective, 5 for holding more than your opponent, and up to 20 at the end of the game for holding objectives. It felt appropriate that the game would likely be decided by who held the massive loot pile at the end! 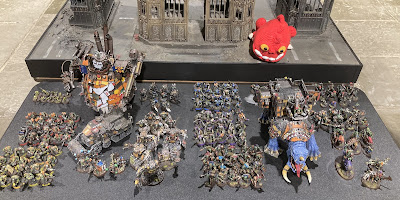 The armies were both Snakebite Battalions with Super Heavy Auxiliaries. In a battle of squigs vs steel, Warboss Redtoof took the Stompa and other armoured elements vs Beastboss Redtoof with Nipper and a load of Beast Snaggas. Redtoof had a couple of Big Meks, two lots of 20 Shoota Boyz, some Grots, Burna Boyz, Meganobz, five Killa Kans and a Deff-rolla Battlewagon in addition to da Toof-Krusha. On the other side, Redtoof brought Durrork the Weirdboy, 20 Beast Snaggas, two lots of 20 Slugga Boyz, ten Nobz with big choppas, Squighog Boyz, a Nob on Smasha Squig, decent sized mobs of Kommandos and Tankbustas, and of course the Gargantuan Squiggoth.
We rolled to see who was controlling what, and I ended up with the Beastsnagga/Squiggoth faction. 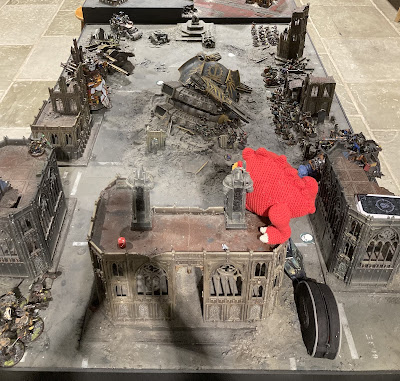 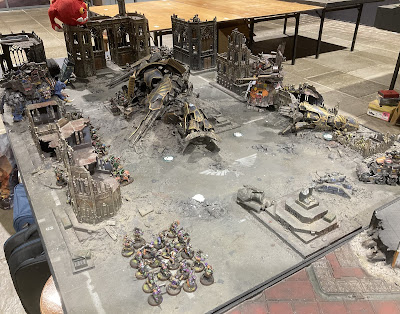 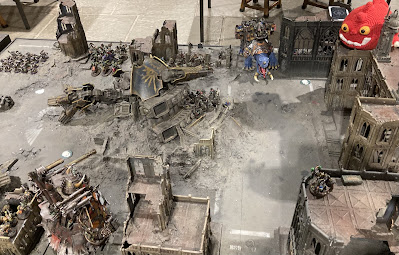 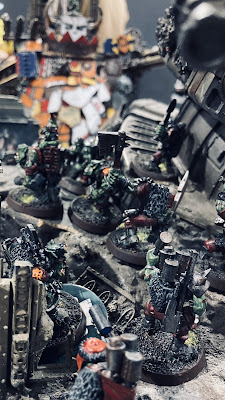 Deployment saw the Tankbustas get on the back of Nipper's howdah, while the Stompa got filled with Boyz and the Burnas plus Warboss and Big Mek jumped in the wagon. The Meganobz got themselves a spot on the tellyporta. The Kommandos forward deployed into cover by the Warlord's head.
The dice were rolled, and Grijbog's Redtoof was going first. Movement happened, and then the Stompa opened up. All the anti-infantry fire blitzed the Kommandos before they could do anything, but the big guns whiffed against Nipper, only taking a couple of wounds off in the end. 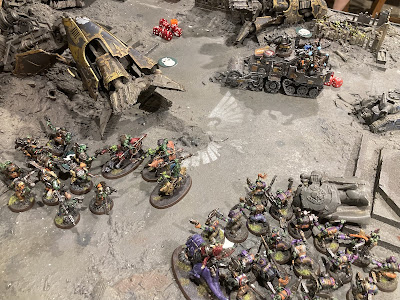 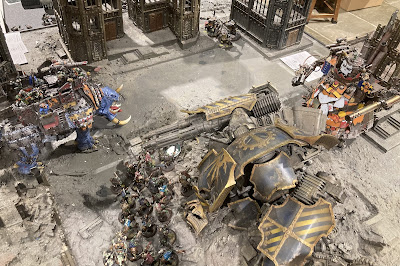 In response, my Redtoof ordered the boyz forward, with Nipper shuffling slightly cautiously. Tankbustas and the Squiggoth's Super Kannon blasted a couple of Killa Kans to bits, and the Squighogs got a big charge against the Battlewagon, doing a bit of damage but between overwatch and the roller they all perished.
I think we both picked up a 'hold your own objective' card so grabbed some secondary points but after turn one I had more of the objectives. 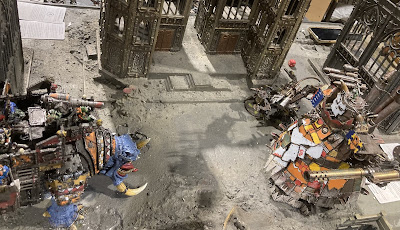 The Battlewagon, Stompa and Kans rumbled up into range for charges, while the Burna Boyz got out to do some burning. Lots of firepower blazed out, killing off a whole bunch of boyz and Beastsnaggas (I ended up spending CP to keep the last few Snaggas around on an objective for points in my turn). 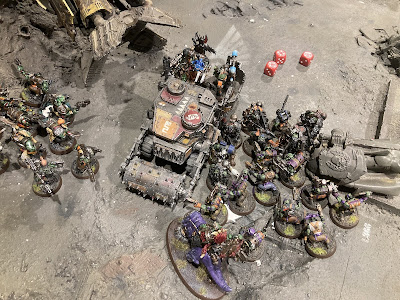 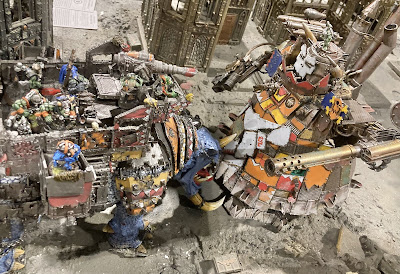 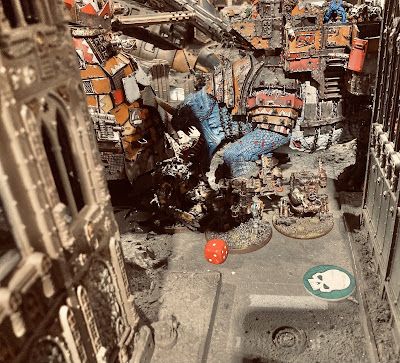 The charges all got in, putting the Squig side under a fair bit of pressure! The Wagon went first to try and deal with the kitted out Smasha Squig Nob, but left him on a single wound. Nipper interrupted to gouge a chunk out of the Stompa, though not enough to save him from the nasty 9 damage choppa! Nipper did manage to thrash out as he fell, killing off a couple more Kans and some of my Boyz.
I got very unlucky with the Tankbusats falling off the Howdah, losing five of them in the fall then a couple more from morale. A rough turn for my Redtoof! As a bonus though the last Killa Kan failed morale and klanked off. 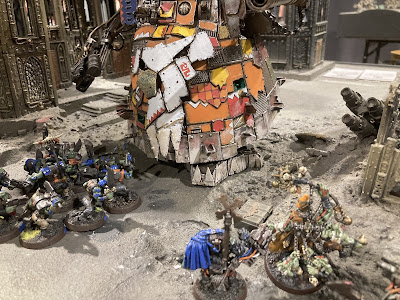 Going into my turn two, the secondary cards weren't helping much but I did pick up the full 10 points for primary. Having lost quite a chunk of my force it was time to go all in and get rid of the Stompa, plus as much as I could on the right flank with the Battlewagon. 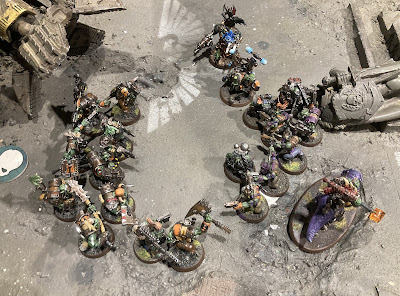 The big unit of Nobz managed to finish off the Wagon after the Smasha Squig had done some damage, while my remnants of a Boyz unit there were slowly overcoming the burnas.
Against the Stompa though it was anything but slow going - Beastboss Redtoof, having declared a WAAAGH!, buffed up with Fists of Gork, armed with the Beasthide Mantle and being a Big-Killa Boss, absolutely smashed his way through the big beast! 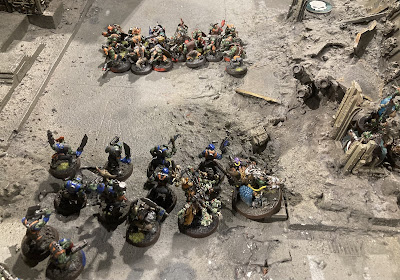 A big mob of shootas came tumbling out, forming up into a sort of firing line against my blue Boyz.
It was a strong counter punch, but the fresh Boyz mob and a teleporting unit of Meganobz might give us some issues. 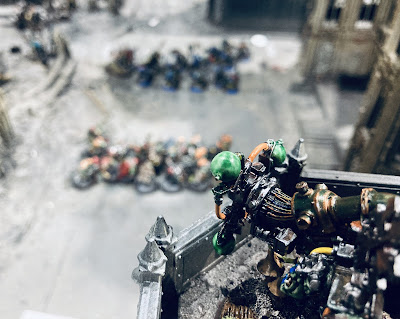 The Shokk Attack gun Big Mek for the 'stompa' side had been having a quiet game so far, and that continued as he watched on to see the shootas pour fire into the blue Boyz and only felling one of them. 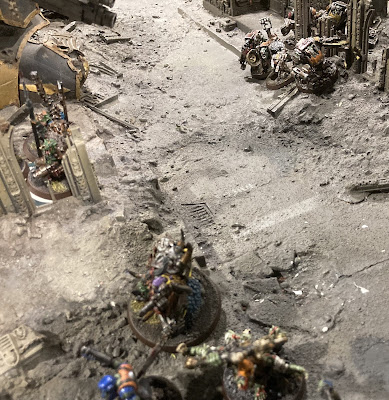 The Meganobz dropped in, skorching the last of the Beast Snaggas, but failed to charge in an assassination attempt against my Redtoof. 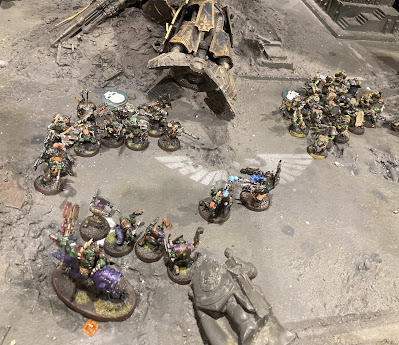 Most of the action this turn revolved around the big foot, where the two characters had some tough decisions about who to shoot and charge. The Boyz got pretty much removed to enable some shots on the Smasha Squig, but the firepower was ineffective. The Big Mek made it into melee and finished the job with his choppa, while Warboss Redtoof charged the Nobz Mob, got interrupted on, and cut down under a flurry of big choppas. 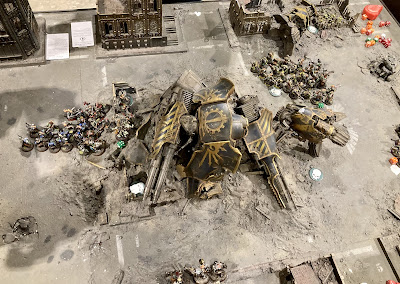 That actually turned out to be a good turn for me, though with not many units left I'd have to make the most of them. Going into my turn three I got a couple of secondary objectives that might be achievable if I pressed forward - to get into the opponent's deployment zone and to control their objective. 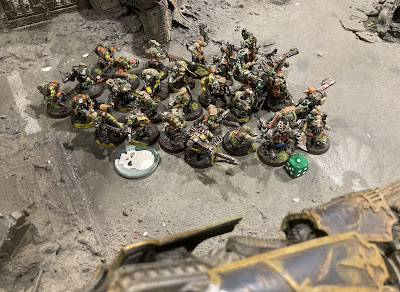 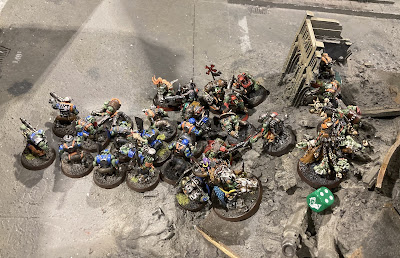 With really just a couple of significant units and characters, I decided to abandon my objectives and go full Waaagh! to try and claim the ones on the other side. The Boyz and Bosses powered through the shoota Boyz by the top of the Titan, while the Nobz chop their way through the other unit of Boyz, but leaving enough of them alive that they still held the objective. 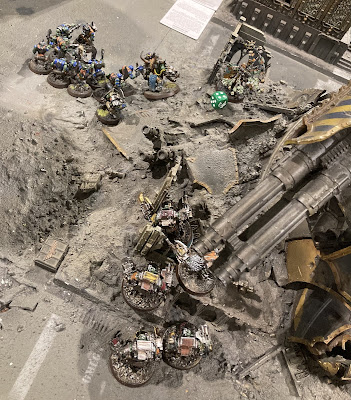 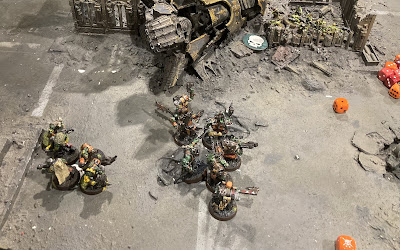 After a big comeback for the Squigs in turn three, the Stompa side were suddenly on the back foot. They did however find themselves holding more objectives, putting the score pretty close. The Meganobz moved in to hold an objective and skorch Durrork the Weirdboy away. The last of the shoota boyz fell back from the Nobz, in order to give them a bit of a choice in my next turn about which objective to go for. That Shokk Attack gun Mek fired a token shot over at the Nobz. Just a casual strength 11, 6 shots! That means in addition to being super deadly in it's profile the SAG dished out a bunch of mortal wounds, reducing the Nobz to a mere two models. Who them promptly fled to morale!
That was another huge swing, removing one of my few units left - remember, we've both been missing a lot of secondary points but there's a lot on offer for holding objectives at the end of the game. 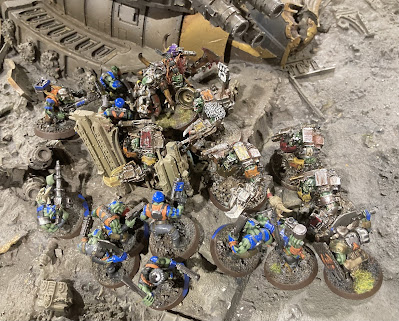 With not much left to do, Beastboss Redtoof and his Boyz pile into the Meganobz. They grind away in the last couple of turns but Redtoof finishes them on my turn five, leaving him the last boss standing, claiming an objective. 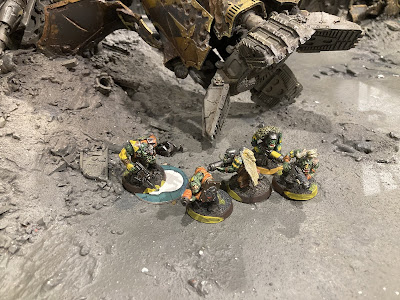 However, with a unit of sneaky grots and the remains of the yellow Shoota Boyz mob both holding objectives, the 'stompa' Snakebites took the win, 50 - 45! Orks win!
While technically I lost, my Redtoof was the last one standing, and more importantly, there was a big fight, so everyone's a winner! This was a real spectacle of a battle with that fallen titan in the middle of the board - though there wasn't much left at the end to loot it! In any case, an awesome fun game and part of a nice trip to Warhammer World where we also took a visit to the exhibition and had a tasty burger and a pint in Bugman's! Thanks for reading, and stay safe out there.
Posted by Redtoof at 16:46