Hello!
First 40k game of the year! With the Grim Dice Crusade League wrapped up, and the new GT mission pack out but not really available anywhere, it was time for good old Tempest of War, a format which is probably cementing itself as my favourite way to play 9th edition. Sadly due to work, Christmas stuff and illness I wasn't able to arrange the last game of the Crusade league (I ended up pretty much dead centre of the pack in the overall rankings) but I was now able to play my scheduled opponent Neilson and his Space Wolves, so we made it happen. Since he was looking forward to a bug hunt, I brought my Tyranids, and we had a nice 1750 point game (because his 2000 point army dropped a lot in the recent points adjustments!). 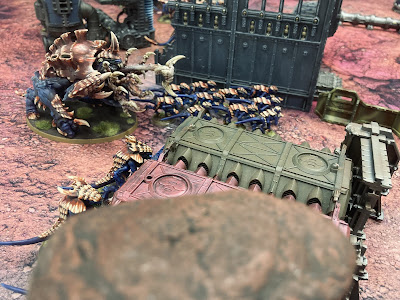 With the new points costs in play I took the opportunity to run a whole load of stuff I'd not taken much and leave out some of the things that were previously such good value. I ran Behemoth as usual, keeping the adaptive trait and fitting into a battalion. The Swarmlord was, of course, my warlord, and I spent one extra CP on another trait. 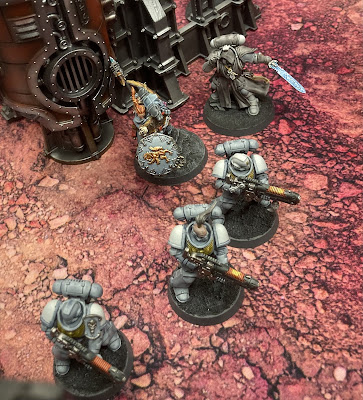 Neilson's Space Wolves were an essentially all Primaris force, heavy on infantry, and as such he had quite a few units. He spend a few CP at the start to kit out his characters and to place the Eradicators into reserve. He had a Captain (aka Wolf Lady), Librarian (Rune Priest), Lieutenant (Wolf Guard Battle Leader?), two units of Intercessors, Assault Intercessors, two of Infiltrators, two of Reivers, Hellblasters, Las Eliminators, Eradicators, Suppressors, Flamestorm Aggressors, a Redemptor and some doggos. It's a lot of stuff at 1750, but I was looking forward to not having to worry about Armour of Contempt! 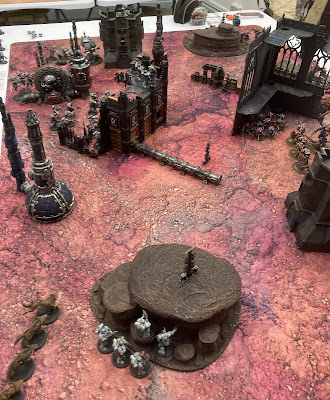 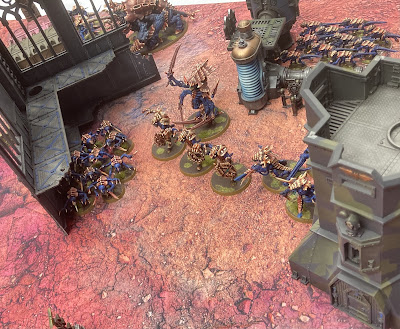 Deployment. We were playing Vital Ground, which is increasing points for holding your home objective, any middle objectives and then your opponent's objective. It also scores extra points for killing units, which we didn't forget this time! The twist was that we placed an additional no man's land objective, meaning scoring that middle points bracket should have been fairly easy. Deployment was long edge triangles, but we both had forward deploying units, and we both had some stuff in reserve - the Rievers and Eradicators vs the big snakes.
Space Wolves got the first turn, and immediately moved up to cause some damage. Not a mega shooty army, the long range heavy weapons reached out to damage the Haruspex (who fixed some of it with Rapid Regeneration in my turn) and then the dread went brrrrrt with the Gatling cannon and a load of genestealers went away - though two remained in synapse range to frustrate. In melee a unit of Intercessors charged Genestealers in one of the central ruins, cutting down several but losing three to return attacks. Some secondary points were scored for claiming three objectives, but no units yet killed. 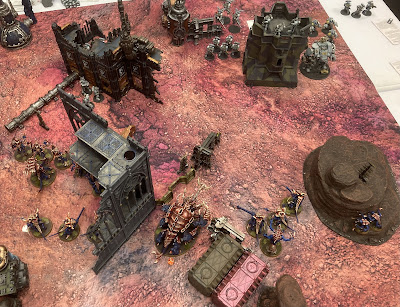 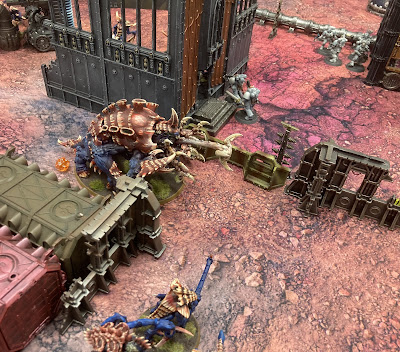 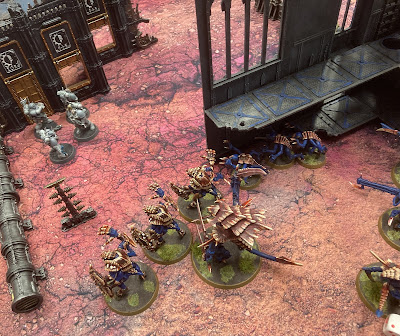 Tyranid turn one saw very little shooting, but a brutal counter punch to claim the middle. The Haruspex gobbled up the remaining Intercessors that had charged the Genestealers, while the Swarmlord and his guard cut down a unit of Infiltrators who had strayed to close to grab an objective - this netted me some points both for the kill and for the secondary card to claim an objective from the opponent. I also had to kill units in melee and kill 30 wounds worth of stuff which were well under way. 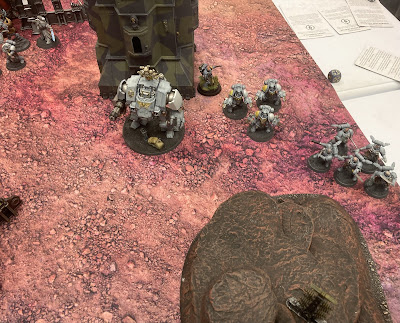 Space Wolves once again marched forward, but only one of their reserve units came in, Reivers on the flank looking to shift my two Genestealers hanging on to the objectives. They had secondary points on offer for killing units in the shooting phase, so between the Redemptor, and Aggressors a unit of warriors fell, leaving the Broodlord clear to be blasted off the board as well. Firepower also damaged the Haruspex once again but it remained alive. 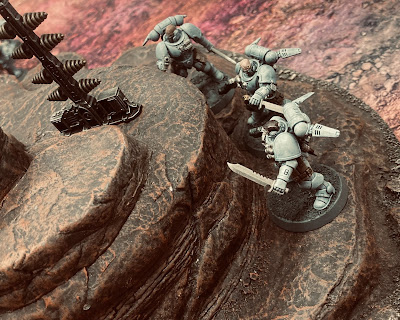 Those Reivers made their charge and displaced the 'stealers, who fought on death out of spite and killed a couple of them in return. Four more wounds for my tally. 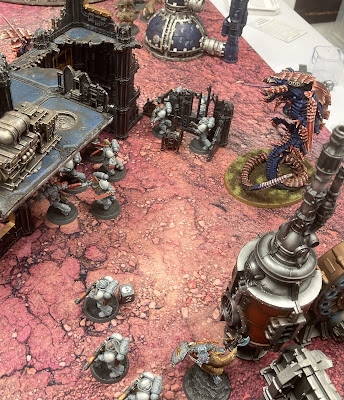 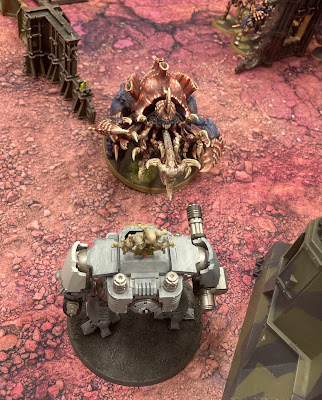 Nid turn two, and it was monster time. The Mawloc burst up to cause some mortal wounds right on the Wolf home objective, while the Trygon found a gap right in the corner. The Haruspex regenerated again and went after the Dreadnought, while the Swarmlord and Guard flanked the ruin to get onto their objective - in this turn the Guard were made ObSec by Swarmy. 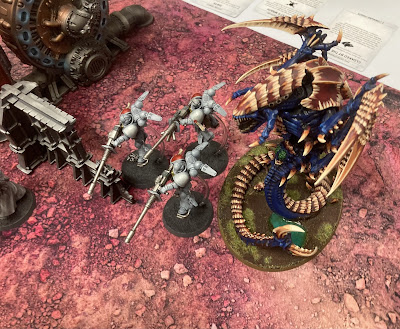 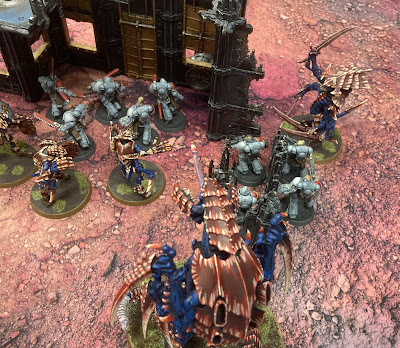 In the shooting and psychic phases not a lot happened, though importantly the Warriors hit the Suppressors to proc the Shard Lure stratagem and give the Trygon an extra dice to charge in. All the other charges were made, and the killing commenced. The Haruspex dropped the Redemptor to a single wound, though sadly was crushed in response. Swarmlord and the Guard both reduced their respective Intercessor units to just the sergeant. Finally the Trygon did kill the Suppressors to finish off my three melee kills!
Onto Wolves turn three, and the Assault Doctrine. Thanks to my melee butchery, they didn't hold their own objective, so lost some points there, but had an opportunity to gain some back in secondaries, with Assassination - kill the Swarmlord... 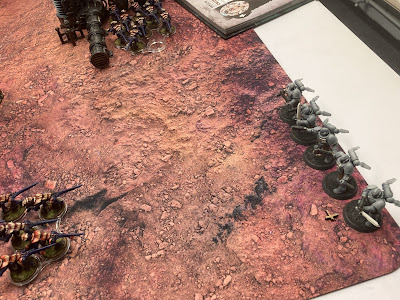 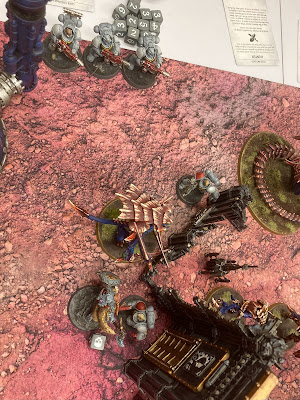 The reserves arrived to put pressure on the Termagants on my objective, while the Eradicators marched into their own deployment zone in order to get a nice close shot at the Swarmlord, while the Frost Axe wielding Wolf Lady lined up for the killing blow.
Unbelievably, only one of the six melta shots caused a wound, which was saved by the Swarmlord's psychic shield, leaving the Space Wolf warlord with a lot to do! 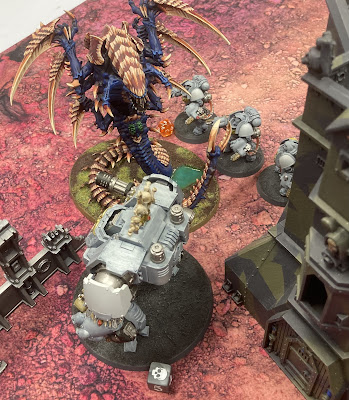 Elsewhere, the wounded Redemptor and Aggressors poured fire into the Trygon, then charged in, but in an impressive displace it split attacks to interrupt and kill both the Dread and two Aggressors, then passed a whole load of Dermic Symbiosis invulnerable saves against the power fist attacks. 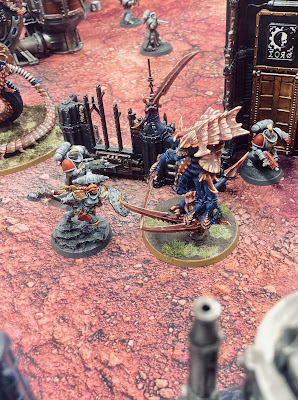 In the big duel the Wolf Lady failed to do any damage, but passed all but one invulnerable save to survive and stick around. 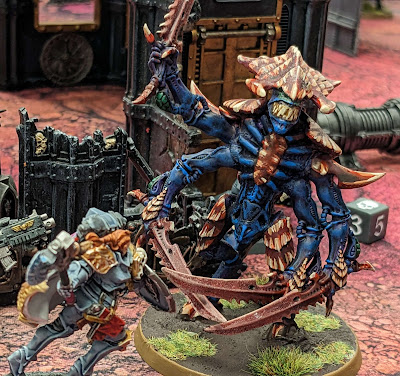 In Tyranid turn three and beyond the fight for the centre was looking good for the Nids, while the flanks were going the way of the Wolves. The Mawloc kept the Eradicators busy/dead for the rest of the game while the Swarmlord eventually took down the enemy general in the grand duel (Neilson took this photo btw, I just thought it was pretty epic so I borrowed it.) The Trygon killed off the Aggressor but then perished to Eliminators and character support. Crucially the Reivers took out the Termagants on my home objective on the second attempt to net a bunch of points. By the end of the game it was looking very tight.
Tallying up the scores, with ten for painting, it ended in an incredibly narrow Space Wolf victory, 79-77.
So first game of the year, and first loss. But really, it's nothing to complain about because it was another great, tight Tempest game. My last three have now been a two point loss and two dead draws, so that goes to show the system is well designed to create nail biters. With tenth edition probably on the way in the summer, I'm not sure quite how many games I'll get in before the end of ninth, but I fully intend to make most of them Tempest games if I've got any say in it! Anyway, thanks for reading, I hope you enjoyed it, and stay safe out there.
Posted by Redtoof at 16:53