This afternoon I took my Tyranids, Hive Fleet Goliath, using the Jormungandr adaptation, against my regular opponent John and his shiny new codex using Necrons, under the Mephrit Dynasty. We played at 2000 points, the mission was Sealed Orders from Chapter Approved, where you start with 6 maelstrom cards and only once you have got rid of them al, can you draw 5 more, then 4, 3 etc. In addition the cards are kept secret from your opponent. As a further note, this was the first game I was using my new orange Tabletop Tactics dice!

My list was largely designed around making use of the Scythed Hierodule, who I have used twice before in 8th and he has yet to reach combat. I took a Battalion, a Spearhead and a Superheavy Auxiliary detachment.

John took a solid core of warriors with character support and some fire support. He was pretty confident he wouldn't be killing the Hierodule on the first turn this time, but his army looked a tough nut to crack. He took a Battalion, a Spearhead and an Outrider detachment, and it was something like this:

Deployment was Frontline Assault (pointy long edges) and I just finished deploying first and won first turn, however John only went and seized on me! 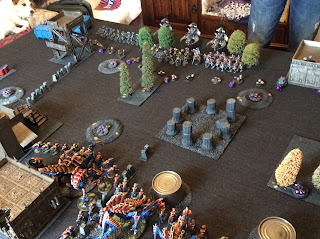 A large chunk of my army started off the board, ready to react depending on what cards I drew. As a ravenous warp beast watched on, the battle began! 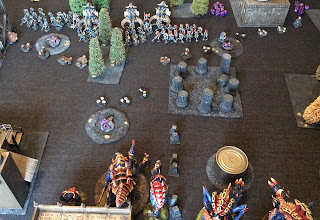 John got a lucky draw with his cards and picked up a Necron specific one that told him to hold all three odd numbered objectives, which turned out to be the three across his lines. He moved up a little and put some damage on my Termagants at long range, reducing them to a few models. No first blood put he picked up lots of points on turn one. 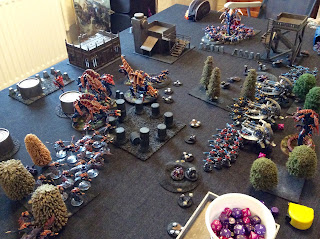 My turn and I moved up, popping all my reserves onto the board. John panicked. Genestealers and Trygon on one flank, swarm of Gargoyles on the other, Mawloc just in behind and not on the picture, the Ripper Swarms in the far corners of his deployment zone. I killed off some scarab Swarms but none of the warriors were in bio-acid range. I scored points for hold the line and behind enemy lines for d3, among some other points to keep it about even.

The return fire was brutal on John's turn. He focused on clearing out my chaff, killing the last Termagants, all the gargoyles and the Genestealers, who were finished off by Scarab Swarms. John also picked up some points but we both started our 2nd turns with one or two cards in our hands, which may have been poor planning on both our parts. 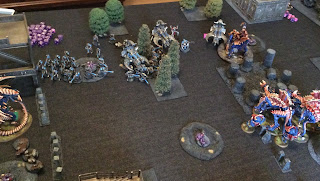 In my turn 2 both the Tyrannofexes got into range, one of which was stationary for double shots. The Scythed Hierodule surged forward, and between the three monsters they cleared out the red warrior unit. The Trygon killed some scarabs, and the Hierodule made it into melee with one of the Annihilation Barges. I used the Adrenaline Surge stratagem to attack twice, but still only did one wound on the damn thing. Quantum Shielding is very annoying! 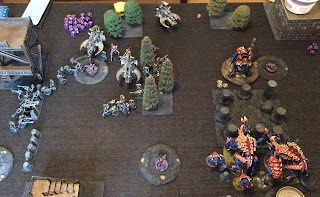 The Necrons manoeuvred around to get their shots off. John threw a lot of fire into the Trygon, reducing it to 1 wound, and also stripped a few off the Hierodule. His toughness 8 really helped out, as did some poor rolls from the Annihilation Barges. Anrakyr boosted the warriors to kill the Trygon in melee, earning John big game hunter. He failed to pick up Overwhelming Firepower however thanks to the Trygon holding on till the fight phase, and he also failed to get Hold the Line thanks to my Ripper Swarms! 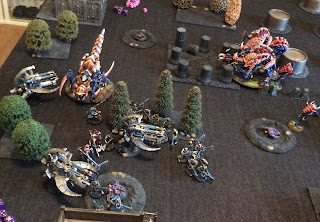 The Scythed Hierodule swung around the get stuck in, and I measured up and found both Tyrannofexes were within 18 inches of the yellow warrior squad. One of the Neurothropes started proceedings with a 5 damage Smite, only taking 1 mortal wound himself. Shooting from the two Tyrannofexes finished off the yellow warriors, while the Hierodule melted the Annihilation barge out of the sky with it's bio acid. In the charge phase he piled into Illuminor Szeras and pinned him to the floor with one of his massive talons. I picked up 3 points, this was a good turn! 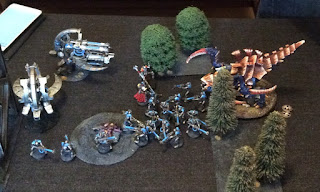 John decided to focus everything on the Scythed Hierodule in his lines (probably smart.) All the firepower reduced him to 9 wounds, the tesla shooting was thankfully poor. The warriors, Anrykr and the Lord charged in. Anrykr managed 4 damage with his warscythe, as did the lord, leaving it up to the warriors to inflict the final wound. A mountain of dice were rolled but not a single 6 to wound! The Hierodule lived on with 1 wound remaining! This would be a big setback for John. 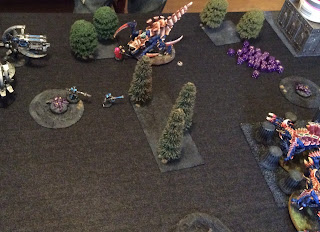 The Hierodule fell back, getting Anrykr closest to his bio-acid, and melting his face. The Tyrannofexes continued to be amazing, reducing the squad of Necron warriors down to a single model, who auto failed his morale check as he warlord lay slain before him. The Hierodule charged the remaining lord but failed to hit in his injured state. The lord failed to wound in return. 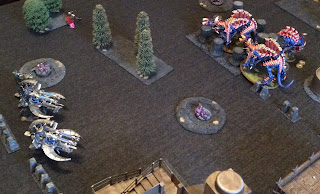 John managed to get another point or two killing one of the Neurothropes that had ventured over to an objective, the tesla finally rolling solidly average this turn, but the damage to their reputation had been done! In melee the Lord finally knocked the last wound off the Hierodule, sending it crashing to the ground, its job done. 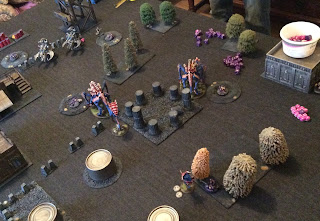 My turn 5, I finally spread out my castle, grabbing three objectives for Ascendancy, and 3 points! One of the Tyrannofexes got close to the injured Lord and melted him with acid. This turn was also notable for being the first one where I actually managed to cast Catalyst.

We rolled for random game length, and the game came to an end. Counting up, John had managed a respectable 13, but I had taken the win with 18 points! A bit of bad luck and a bad match up for John, but a good game nonetheless. It's nice to play 8th edition and both armies being left with some usable units on the field at the end. We discussed it and considered John's list to be quite difficult to deal with. If I'd taken Rupture cannons instead of Acid Spray on my Tyrannofexes I would have really struggled to find them a target, and those warrior blobs would have just hung around forever. Similarly if John had access to some genuine anti-tank weapons, that Hierodule might not have had quite such fun. In the end, lessons learned and a good time was had by all.