I've been working away on my current project over the weekend, a Halfling Blood Bowl team! The minis are from a recent Kickstarter by Star Player Miniatures, as seen here. I haven't entirely decided on a team name yet, but I have decided on a black and red scheme, as they are sponsored by Nan Doe's Spicy Chicken.

Anyway, here is the full team and support staff: 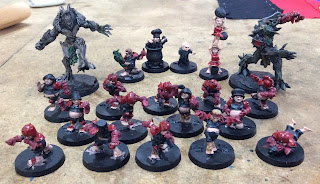 I love all the little fun details on these guys. Hairy feet, colander helmet, the chicken leg catcher! They are very cool sculpts. I'm looking forward to getting these little guys on the field and losing horribly. I'm still a relative Blood Bowl noob, so I'm not expecting great things, but a spectacular failure or two could be a bit of a laugh. 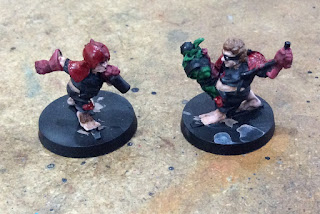 Hopefully these two little heroes might stand tall (chortle). On the left is the captain, Piggy Beefteeth (named after a notable Halfling Rogue/drunkard in one of my D&D campaigns). On the right is a cheeky chappy stealing a goblin's sausages. I think I'll be using him as a star player to spend some of my inevitable inducements on. 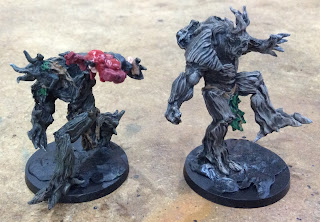 While it may be a bit optimistic hoping for heroism from Halflings, I'm a bit more expectant about the chances of the Treemen to leave a mark on the opposing team. Be it throwing a team mate or just stamping on someone. They do have one major weakness though, they do love to take root. But how do you remember if they have done so on the field you ask? 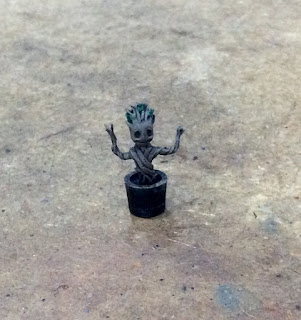 With this gRooted marker of course!
Posted by Redtoof at 19:09