Another easy stage of the Ork project - sorting out all the vehicles and their guns! No bases required changing, (though I did add a bit of static grass here and there) but there were a few breakages to fix and I had some plans to expand the current level of magnetisation. Here's what we were looking at to start with (after fixing a Kan back onto it's base): 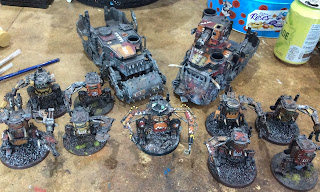 At this stage all the gun arms on the Killa Kans (not pictured here) are magnetic, and the Battlewagons have interchangeable small turret options, plus the big turret can be removed. Some options there, but I could do with more... 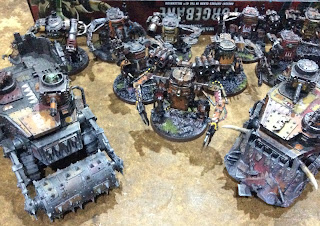 Here is where we are now. More magnets added, more weapon options painted up and a bit of a rework of the Deffdread. 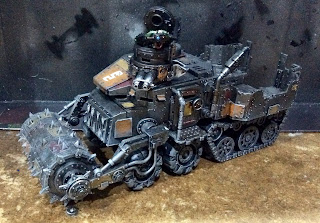 Deff Rolla wagon with a double big shoota turret option. In a pinch this could run as a Bonebreaker, but the lack of roof on the back puts me off this idea. 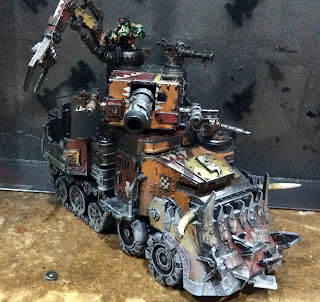 The Killkannon wagon. This time loaded up with a grabba klaw and four big shootas. As you can see, I've replaced the periscope and stikkbomb chukkas with magnets for versatility. If required I can go back and add some more vehicle upgrades later. Again, this could be a Gunwagon but for the lack of 'ard case upgrade. I may add a magnetic roof option at a later date for these wagons, but for now I don't see it as particularly thematic to the army so I'm not in a hurry. 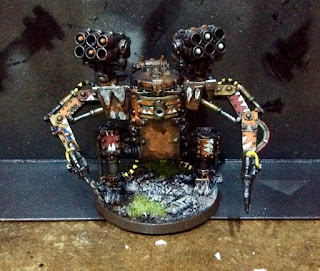 The badly photographed (even by my standards) Deffdread. He's had a bit of a makeover, removing his chest skorcha and the remains of a broken wrecking ball from his roof, and ramshackle shoulder pads added with magnetic weapon mounts. Seen here with a pair of Rokkit launchas. I also added a few more weapon options so it can go double skorcha or big shootas. No extra melee weapons at the moment, again, maybe something to come back later. 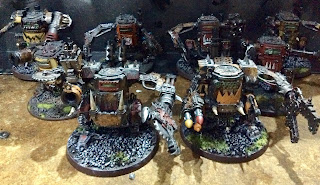 And finally the Kans. No real change here apart from a few more weapon options and a bit of grass. Since the melee weapons now make a difference, I've tentatively organised them into two mobs, one with klaws and the other with buzzsaws.

Next step will be Da Big Boyz - a bit of a fixing and maybe a touch up for the Stompa and Squiggoth! And after that I'll have run out of things that don't need a base resize. To that end I've just made an order with Tabletop Adapters for 250 25 to 32mm base adaptors. That should make things nice and easy. Maybe.