As mentioned in my Ork Project entry, I am sadly retiring several minis from the main force as for various reasons I don't see myself using them in the future. I'm not entirely sure what to do with all of these guys, I think some might end of being sold or donated to friends, while others might get recycled and reabsorbed into future projects. For now though they will get to sit around at home, drinking squig brew during the day and complaining about 'da yoofs of today'.

Firstly we've got a load of character models that are unlikely to find a space in a Snakebite clan list. 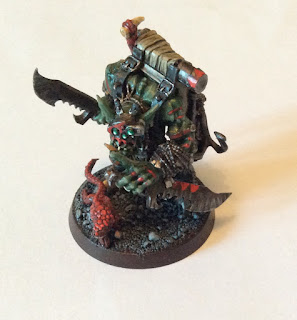 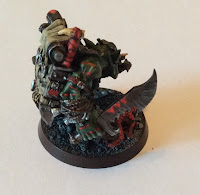 Boss Snikrot - a very cool model and saw a lot of use during the days of his special ambush rule allowing all sorts of hi-jinks. He might get reused as a Snakebite Warboss of some kind one day. 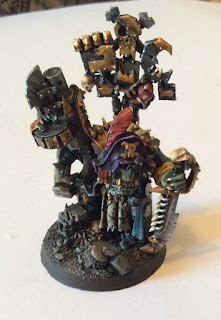 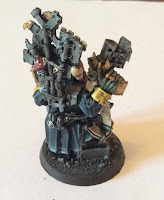 Kaptain Badrukk, as a Flash Git boss, is technically still available to turn up alongside the Snakebites, but it's not very thematic and he doesn't really suit an army that isn't largely a gun-line. I remember he was fun to paint with his little treasure map loin cloth, but he doesn't really feel 'right' for the army to me. 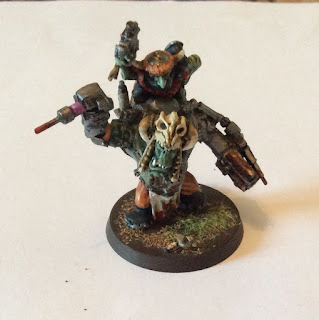 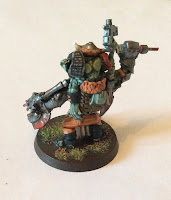 This is Dokta Hogsnikk - a Snakebite rip off of Mad Dok Grotsnik. This was a fun conversion, and I've had loads of use out of him over the years. However sadly in the current rules he's not available to a pure Snakebite list as Grotsnik, and thanks to conflict with the clan Kultur, running him as a regular painboy is a bit redundant. 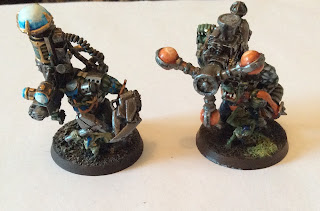 A couple of converted Big Meks next. Thought both are technically valid as Snakebite choices, I own a surplus of big meks and I can't envision a situation where I'd take five of them. The left one is converted from a Nob with a powerklaw and holds a Kustom Force Field made from random gubbinz. He's also pretty clearly a Deathskull. On the right is another Nob based conversion holding an old 2nd edition Shokk Attack Gun, with tubing made from a drinking staw.

Some random Meks and a Runtherd. I don't currently have enough gretchin so the Runtherd isn't very useful, and the meks/spannas don't feel very useful outside of Deathskulls or Badmoons. I might steal that saw blade for something though... 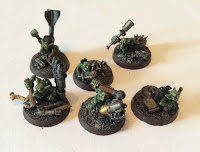 Ammo runts! There was a time you could take hundreds of these with your Flash Gitz and others. Now they are limited to 1 per 5, so I've got spares.

Next some vehicles, and a wall? 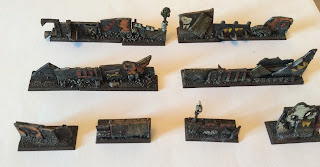 This is an Orky Aegis defence line I built back when it was all the rage to have a wall in your army list. It's made from random chunks of plasticard and various Ork bitz. A lot of the plates came from the Stompa kit. The sections are all the same lengths as the official Imperial model, and roughly the same height. This would suit a more stand and shoot Ork list, or would be great as extra terrain for an Ork themed board. 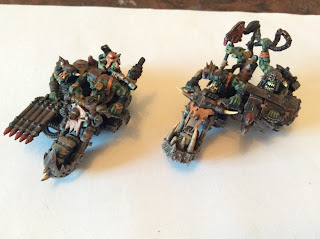 These Warbiker conversions have long served as buggies in my armies, providing cheap mobility and fire support. They are now however fighting for the rule even more closely with Deffkoptas, which just seem like a better choice to me. They might well get canibalised for the bits though. 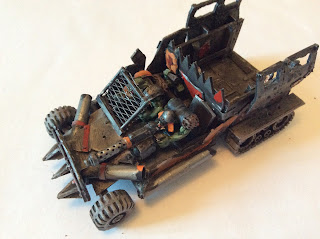 This old scratch-built Trukk has also been a long serving unit for me. It's definitely showing it's age now though, and has less of a role now than it has in the past. 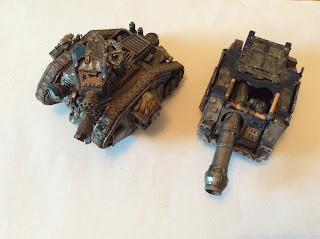 These two looted wagons however still look pretty good to me. They've both had numerous modifications over the years in true Orky fashion to get them where they are today. They are however very obviously Deathskull wagons, and don't really fit the in thematically.

Finally we've got some very thematic Snakebite conversions! While I do like these guys, I think I can probably do better with the models available now/more work. 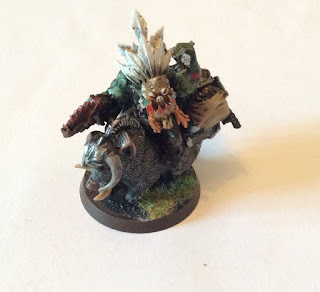 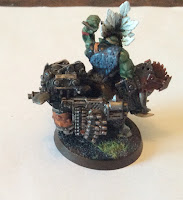 A Painboy on a 'bike' with a Killsaw. Really love the mask and thought it was very appropriate for a witch doctor style Painboy, but the boar does like a bit tiny these days, and, as mentioned previously, Painboys don't really do a lot for me. 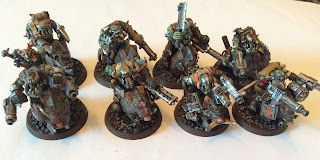 Boarboy Bikers. Some fun conversions in here and several classic bits from some very old models. Again though, they would look much nicer on newer, bigger boars. 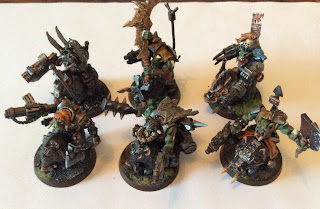 These are my Nobz on Bikes. They've had a few alterations over the years, most recently to equip some of them with big choppas, but I think this only serves further to illustrate the relatively small stature of their piggies. 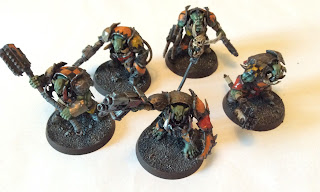 These guys are pretty recent, converted from the Age of Sigmar Ironjawz range. They were originally going to be Meganobz, because I had visions of taking 15 of them for one of the Ork formations in 7th edition. Thankfully that's not really a thing anymore. Sadly these guys are slightly smaller than 'proper' Meganobz, and significantly bigger than regular Nobz, so they don't really fit for me in their current guise. I have considered giving them a hefty 40k-ifying makeover with lots of extra armour and gubbinz to make them Meganob worthy, but I'm not sure I'd use more than the five metal Meganobz I already own.

So there you have it. The Orks that get to put their feet up and take a well earned rest. Until they are inevitably broken down into bits or shipped off to fight for another Warboss!
Posted by Redtoof at 20:00