Hello!
Another game of 9th edition 40k, and another new opponent. This time I brought out the Tyranids of Hive Fleet Goliath to play against James P's Astra Militarum force on his beautiful table. (Check him out on Instagram - jp_wh40k.) We played a 2000 points Strike Force game, the mission was Scorched Earth - 6 objectives and 'dawn of war' style deployment. 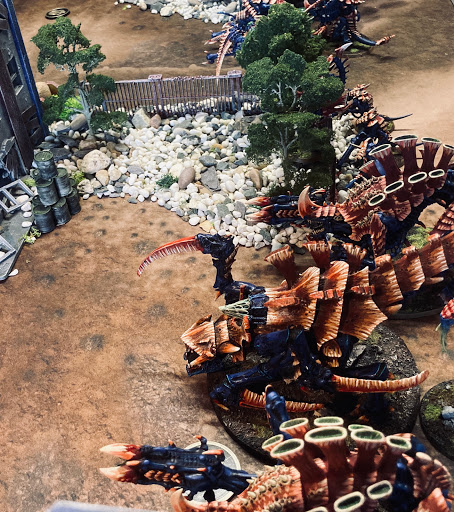 I took a Battalion and a Super Heavy Auxiliary detachment, using the 'official' Goliath custom traits: Prey-sight (+1 to hit in the first round of melee for monsters) and Metamorphic Regrowth (everything gains a wound back at the start of my turn), though sadly these no longer apply to the Auxiliary detachment - though I was able to give Dermic Symbiosis (5+ invulnerable and double wounds for brackets) to the Scythed Hierodule. For my secondary objectives I selected Thin Their Ranks, Engage on All Fronts and Assassinate.
HQ: Old One Eye, Neurothrope (Norn crown, Catalyst), Malanthrope (warlord)
Troops: 3x 3 Ripper Swarms, 3 Warriors (2 Deathspitters, Venom cannon), 29 Termagants (all devourers)
Heavy Support: 2x Tyrannofex (Acid spray), 2 Carnifex (Talons, venom cannon, spore cysts, enhanced senses, adrenal glands, scythe tail)
Lord of War: Scythed Hierodule (Dermic Symbiosis) 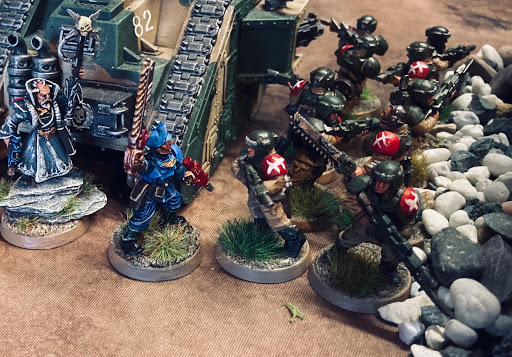 James took his guard as a custom regiment with a trait that boosted the range of all 24+ inch heavy weapons by 6 and allowed him to reroll one die on the number of shots for each weapon being fired. He also took a couple of tank ace abilities to make his Basilisk a flat 3 damage and his Punisher -1 AP. This was all pretty tasty! His secondary objectives were Thin Their Ranks, Bring it Down and Raise the Banners High. His list was a Battalion and a Patrol I think:
HQ: Tank Commander (Demolisher, lascannon, plasmacannons), Tank Commander (Punisher, lascannon, plasmacannons) Tank Commander (Battlecannon, lascannon, plasmacannons), Primaris Psyker (+1 to saves psychic power)
Troops: 6x 10 Guardsmen
Elites: 8 Bullgryns (combination of shields), Priest, 2x Platoon Commanders
Heavy Support: Basilisk, 2x Thudd Guns
Transports: 2x Chimeras (heavy flamer/heavy bolter) 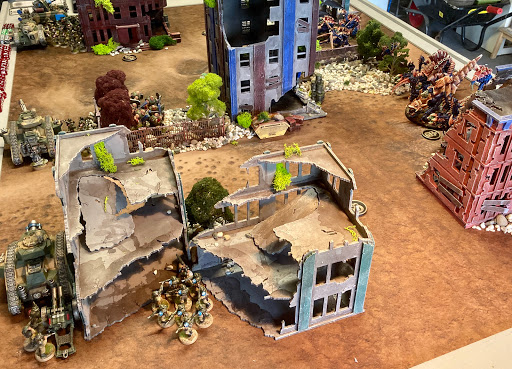 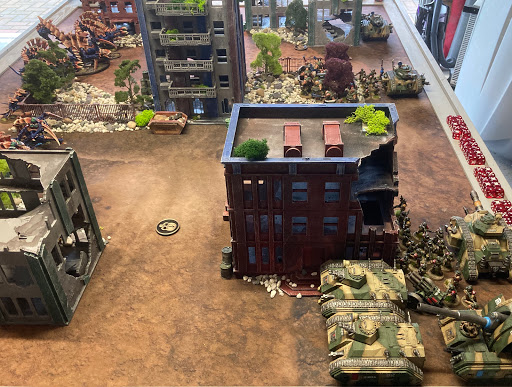 In deployment I opted to put the Termagants in strategic reserve and James stuck a couple of Guard squads in the Chimeras, but everything else was placed on the board. With way more units than me, I was fully down before James had placed his really big guns, so I had to guess which road to go down with my bigger blob of monsters, choosing the left flank, with the Carnifexes taking the right. The Guard castled up behind the terrain in the corners and the centre, leaving me limited targets with my limited long range shooting. I won the roll off to go first, and after a long thing, decided to go second, reasoning that in my first turn I'd not have anything to charge and I'd leave myself open. In hindsight this was probably a mistake, but I was hoping all my -1 to hit effects would keep me fairly safe. 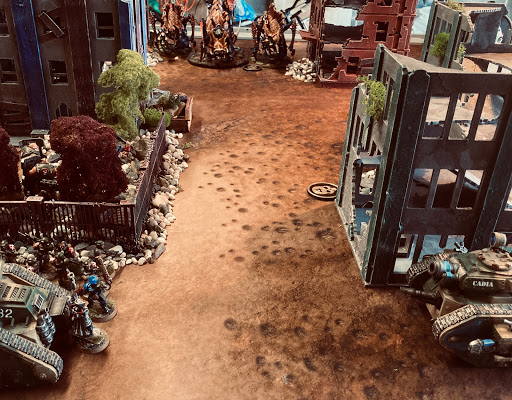 Astra Militarum rolled into turn one, bringing the Chimeras up one flank to grab an objective and otherwise shuffling a few tanks out of their obscured hiding places. James sent the units in the middle to his left, my weak right flank, and opened fire. Both the Carnifexes fell to one of the Tank Commanders, but the -1 bubble kept my big monsters largely safe. I thought I had survived the shooting phase well enough, but the presence of the Bullgryns marching down the road meant I probably wasn't going to make much progress there! 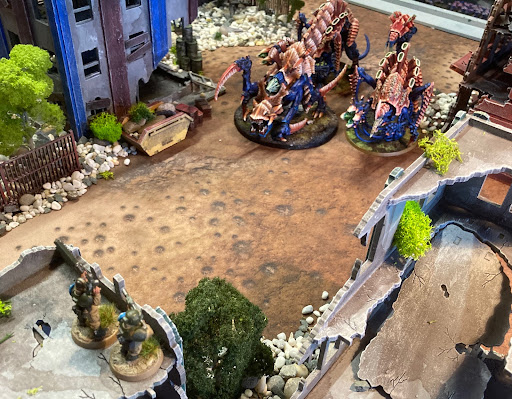 My turn one and everything moved (slowly) forward. Poor advance rolls meant I wasn't on any additional objectives, limited shooting meant I wasn't pushing the guard off any either. Old One Eye was left exposed, so I put Catalyst on him and sent him after a Chimera just to do something before he got shot to pieces, the Warriors taking his place on a home objective. 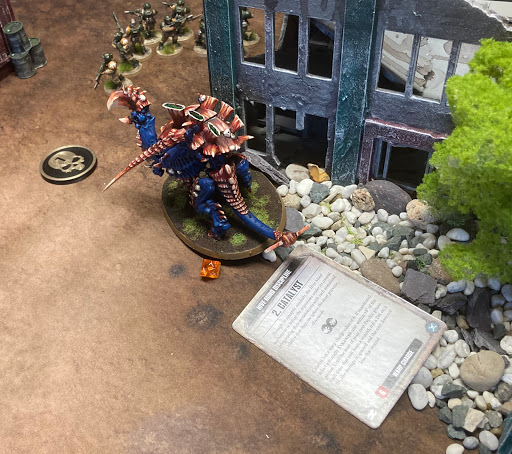 Predictably the Chimera was smashed apart with the crushing claws, but the troops got out onto the objective so no real gain other than a few points for secondaries. The question was if I could survive the second guard shooting phase and get myself into the game after that?
As it happened, Old One Eye with Catalyst proved very durable, eating a huge chunk of the firepower before perishing, allowing the warriors to hold the objective with one wound left and leaving my big blob untouched - untill the Demolisher landed a couple of solid hits and knocked off 10 wounds! Elsewhere in the guard turn the Bullgryns moved up, continuing to look scary, and the last Chimera zoomed around into my deployment zone, presumably ready to dump troops on my objective. Banners were also raised and points were scored. Into my turn 2 I picked up 10 for the Primary but I was behind and on the back foot. 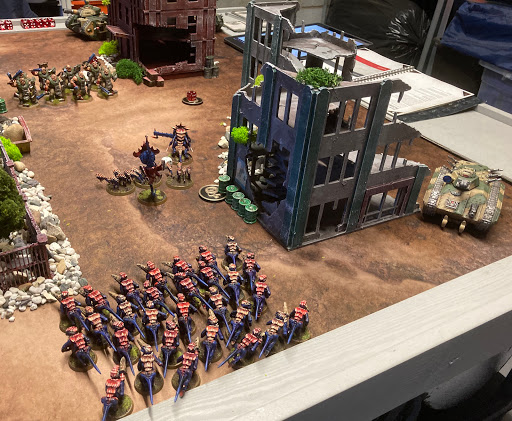 The stratagic reserve Termagants turned up on the weak flank to provide some bodies and wreck the Chimera - I really wanted to come in from a flank but thanks to the smaller board size, terrain placement and James' units spread all over the board, there were no good spaces. Instead I settled for this spot and used Single-minded Annihilation to (just about) turn the Chimera into Swiss cheese. 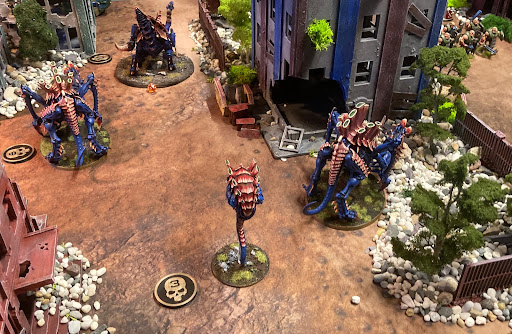 On the stronger side the blob split to hold objectives and put some Acid Spray into some guardsmen and the Bullgryns (killing, I think, two of the former and one of the latter). I also put Rapid Regeneration on the Hierodule who raced up the board, still acting on full profile due to Dermic Symbiosis. 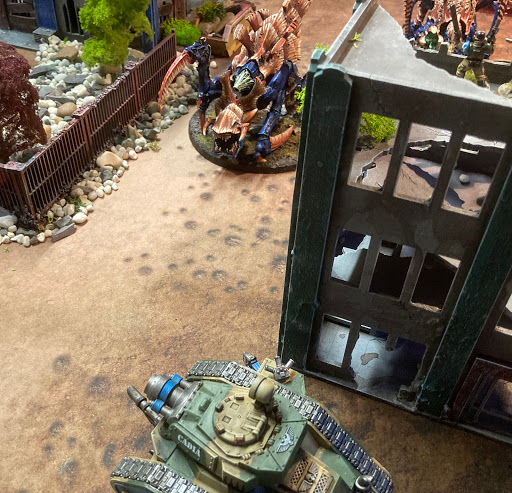 Shooting a psychic done (the Neurothrope put catalyst on itself to try and hold the home objective), we moved on to the all important charge phase. The last warrior scuttled into the guardsmen on the objective to deny a banner and be annoying, then the big event. I measured an 8 inch charge for the Scythed Hierodule onto the Demolisher Tank Commander. James opted to overwatch, and played Defensive Gunners to hit on 5s. The lascannon whiffed, the Demolisher failed, but the plasma sponsons put 4 wounds on, reducing the Hierodule down to 4. I opted not to reroll a save, keeping my CP reroll for the charge. Even on 4 wounds (counting as 8) I was fairly confident the big bug could tear down the Leman Russ and then provide some targetting issues for the Guard in turn 3. But, even with a 3d6-drop-the-lowest charge, and spending that CP on the reroll, the Hierodule was agonisingly short.
Realistically, that was the end of the game as a contest, but we played a couple more turns to see if I could score more points. 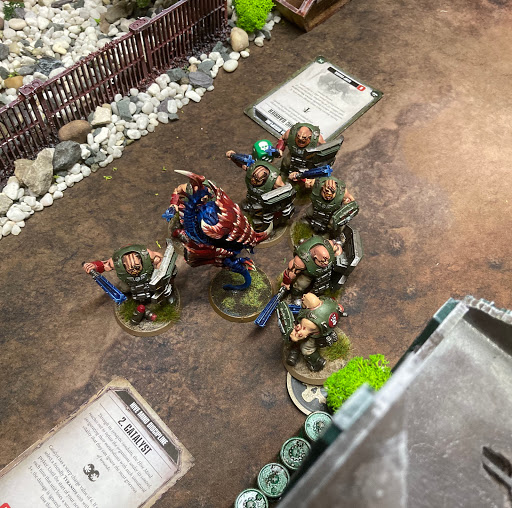 Turn 3 and the mopping up started, the artillery removing all my Termagants and that Demolisher polishing off the Tyrannofex that had strayed out of the Malanthrope's aura. The Bullgryns tore through the Ripper shield to make it into melee with my Neurothrope, who amusingly stuck around for a few turns thanks to his 3+ invulnerable save, Catalyst and regaining wounds in my turn, but he eventually, inevitably fell. 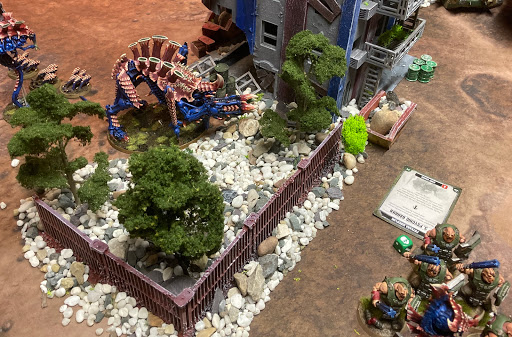 My turn 3 was realistically my last, so I grabbed a few points here and there. Tunnelling Rippers popped up for Engage on All Fronts and the last Tyrannofex melted the Priest who had been left behind by the Bullgryns. Then in turn 4 the guard tanks cleaned up, leaving me with just the brave Neurothrope defiantly holding on until he got a maul to the brain.
We didn't play out the last turn, but with everything added up the scores ended roughly 90 to 40 in the favour of the Astra Militarum. Ouch - the bugs got splattered!
Overall an interesting game, and still an enjoyable one. Always nice to go and play a new opponent, especially when they have a great looking table and army, making for some nice pictures. James did say he's used to playing against Space Marines so he felt he has to take the three tank commanders etc to compete, which I fully understand (and if they had been regular Leman Russ tanks with BS4+ my -1 might have given him a much harder time). I don't think my list was too bad given my model selection (still no Hive Guard or Exocrine) but it was very reliant on the Hierodule performing, which he didn't. I also think for this game I should have taken the rupture cannons on the T-fexes to give me some ranged, anti-tank firepower. The Acid Spray looks like it'll be a great choice in 9th - able to own the mid board, fire into combat and make a mess of marines, but it wasn't what I needed for this list really.
List talk aside, I'm enjoying 9th and it's mission format - though just playing the standard matched play missions will probably get old fairly quick since they are so similar. The terrain also came into it's own here, forcing the battle to take place on two fronts, and in some cases granting -1 to hit where it wasn't already provided by my special rules. We did have a question here though - does dense terrain effect weapons that don't require line of sight? Seems like, as written, it does, but it's a bit weird if the unit isn't actually in the terrain. We ruled for this game that it wouldn't effect those shots unless the unit was actually in the dense terrain, but I'd be interested to see if there is an FAQ on this out there (or will be soon?) Anyway, hope you had fun reading, and stay safe out there.
Posted by Redtoof at 14:07