Hello!
This is the first game of the Helios Exploratory Crusade, the story of Magos Vettius Thannek's quest to recover lost knowledge and archeotech relics and rise up to become an Archmagos. In the first game (and probably in a fair few more games to come) they came up against Prince Vaspasian the Profligate of the Emperor's Children, who's aim is merely to become a legendary name in his legion to rival Fulgrim himself. This was a 50 power level game against fairly regular opponent John, the mission was Supply Cache - granting the winner an invaluable additional requisition point.

I picked a patrol made up of Magos Vettius himself, Skitarii Vanguard, Kataphron Breachers and Destroyers, a maniple of Kastelan robots (with fists) with their Datasmith minder, a Dunecrawler and the new boys, the Serberys Raiders and Pteraxii Sterylizors. At the Incursion sized games each player picks two Agendas - I chose Search for Archeotech, which seemed narratively appropriate but would be difficult to accomplish because it requires an infantry unit to make two actions in the enemy deployment zone in order to get bonus experience points, and Kingslayer, as I thought it again fit the narrative of that Daemon Prince trying to be a legend. 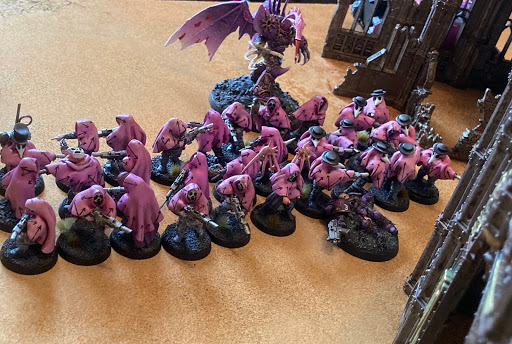 John's force featured Prince Vaspasian, obviously, who had a relic and warlord trait already. He was bringing a patrol of 30 Cultists, 10 Noise Marines (pumped full of combat drugs - this started John on 4 Crusade points to my 2 in his list, which we missed - should have awarded a bonus CP to myself) in a Rhino, 6 'Bikers' (actually snake tailed mutant marines) and 5 Terminators in the warp. His Agendas were Lord of the Warp, which would give experience to Vaspasian if he casts more powers that anyone else (so, one), and Reaper, which would be bonus XP to whichever unit kills the most enemy units - which felt appropriate for an army trying to compete with each other for glory. 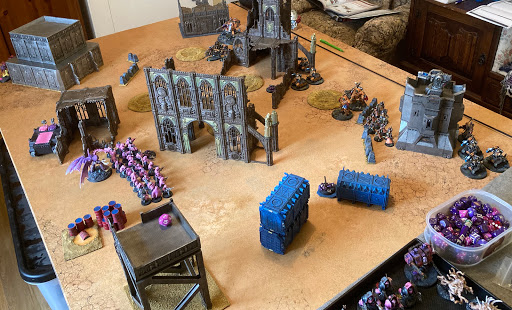 Here's deployment. Point to note, we opted not to reduced the board size any further since we were at the top end of the Incursion power limit, we didn't feel the board was too big or anything. Having more units meant I could 'win' deployment, putting my Neutron laser staring down the Rhino and my Destroyers eyeing up the bikers. I was however outfoxed as the Emperor's Children used a stratagem to reposition the bikers to the other side of the board, leaving the Destroyers to aim at the cultists. We rolled off, and the forces of Ryza went first. 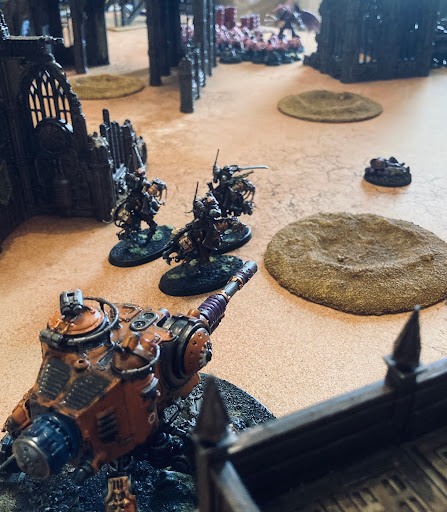 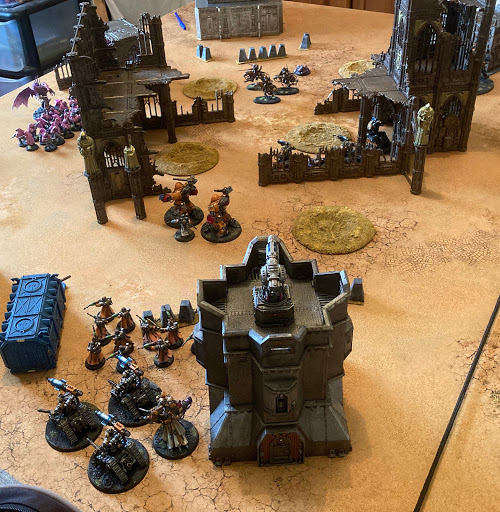 Turn one, the Mechanicus forces moved up the board, getting into range of 3 of the objectives. I also changed the protocols on the Kastelans to the Conqueror setting for next turn. In shooting the Destroyers incinerated a swathe of cultists and the Onager got a lucky shot to take out the Rhino in a single round. The Raiders managed to chip a wound off Vaspasian with their Galvanic carbines, but were perhaps a little exposed after that... 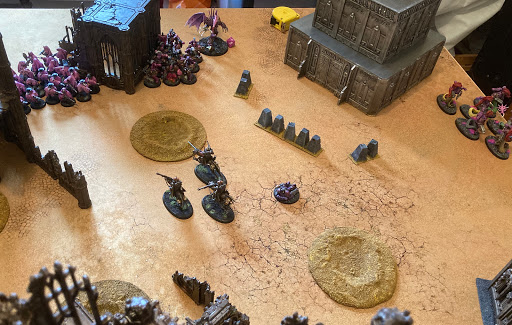 Charge of the light brigade! Unsurprisingly the Raiders were cut down, along with a couple of the Breachers on the central objective and some damage on the Dunecrawler. I regretted not using Acquisition at all Costs on the Servitors, which might have kept more of them alive. None the less, when the smoke cleared I was still holding 2 objectives to John's 1, putting me into an early lead. 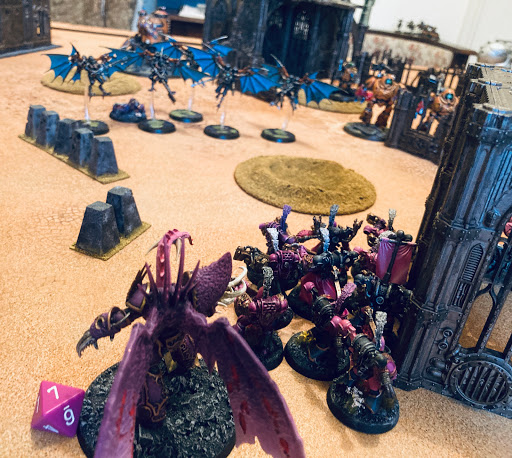 Is it a bird? Is it a plane? No, it's a unit of Pteraxii Sterylizors, coming in to see if they can last less than a single player turn on the board! I had a grand plan to burn away enough of the Noise Marines (and probably lose the Pteraxii in the process when the fired upon death) that the Onager could shoot Vaspasian in his Profligate face. Sadly thanks to their combat drugs they were at toughness 5 and only a few were cut down. In their return fire they killed off the last Breacher. 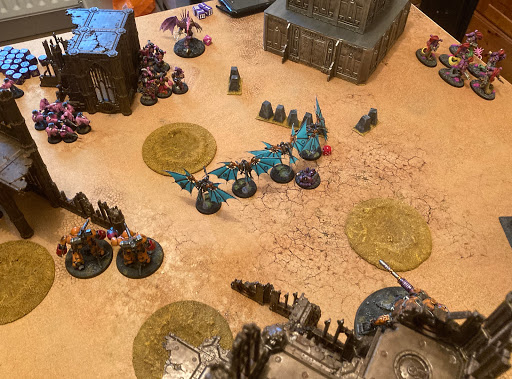 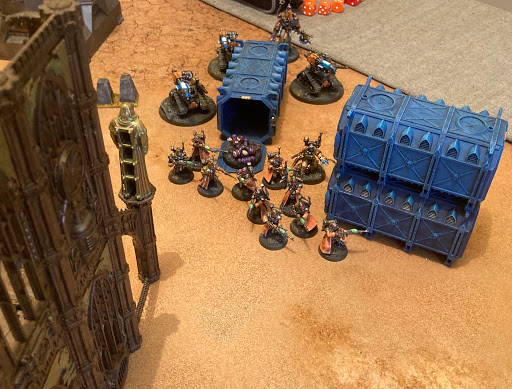 Elsewhere, the left flank moved up, killed more cultists and got into position to possibly search for Archeotech next turn. The robots advanced up to line up a charge next turn, and the Pteraxii failed their charge, losing one to overwatch. 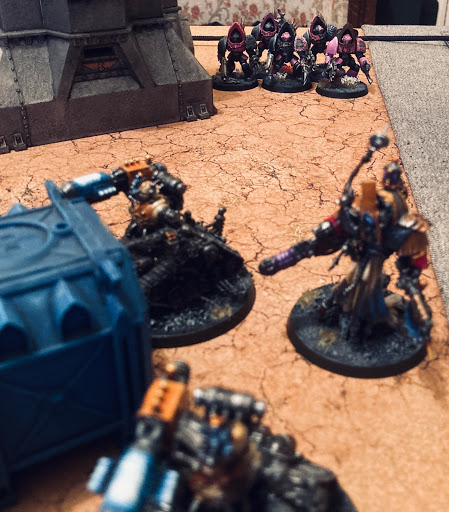 Terminators in the back passage - could be a problem! Their shooting was fairly underwhelming, as were the Noise Marines for once (lack of CP for their big buffing stratagems). The Sterylizors unsurprisingly had their wings clipped, while the Bikers tied up the Onager and nearly killed it in melee. The Terminators charged in to Thannek, stopping the Destroyers from shooting, and taking two casualties themselves from the Magos' axe and the Kataphron's tracks. They did manage to fell the warlord though. 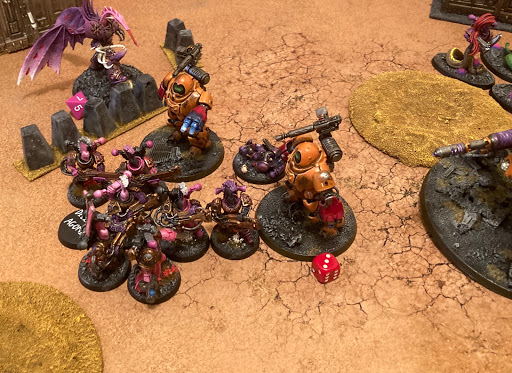 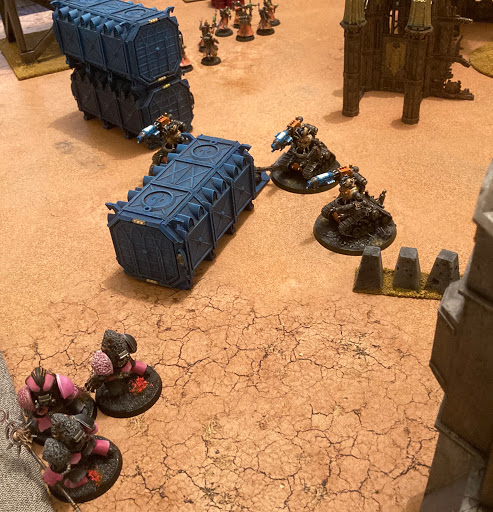 Not much shooting left for me in turn three, the Destroyers and the Onager fell out of combat, the Vanguard killed all but one cultist (who didn't run!), and Datasmith Sek Decima starting rummaging around for Archeotech. The Fists of Reverence - the Kastelan Robots, charged into the Noise Marines and catching Vaspasian, who heroically intervened. Now it's 9th edition that meant the bots got to swing some fists at him as well! He survived the first round of attacks, then interrupted before the Conqueror protocols could kick in, killing off one of the robots, which exploded. In a chain reaction, the nearby Onager was destroyed, and I played Machine Spirit's Revenge to have it explode as well! 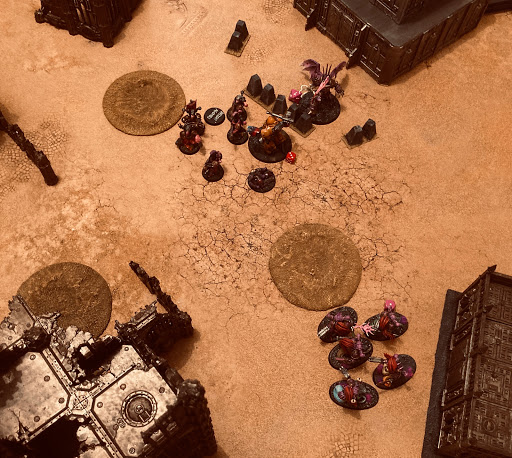 When the dust settled, the Prince took a fist from the last bot, before the Noise Marines dragged it down. Going into their turn 3 the Emperor's Children had taken the right of the board and were racking up the points. 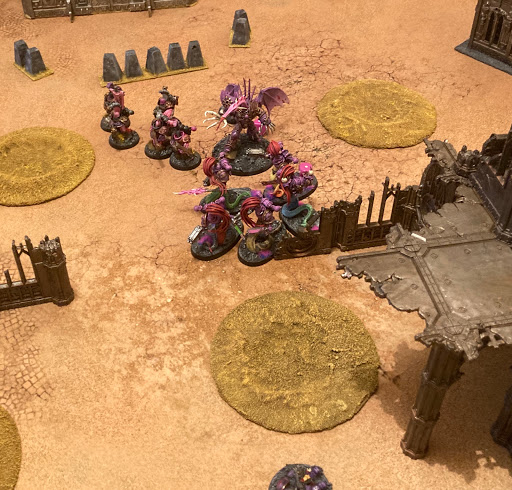 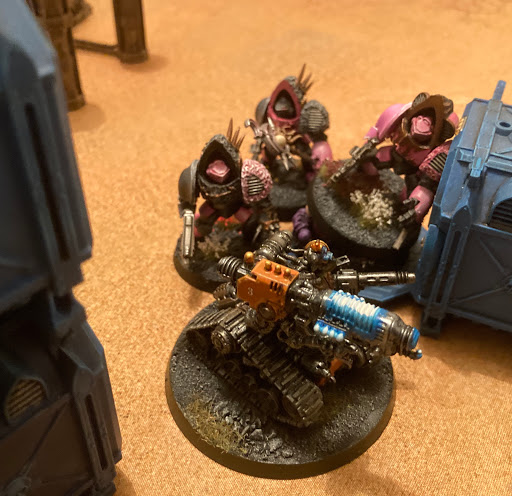 Some long range shots and the firepower from the remaining terminators diminished the Destroyers and picked off some of the Vanguard, before the Terminators charged the last servitor to finish off the unit. With not much left on the board, that was pretty much game over in terms of the objective, but I still had my agendas... 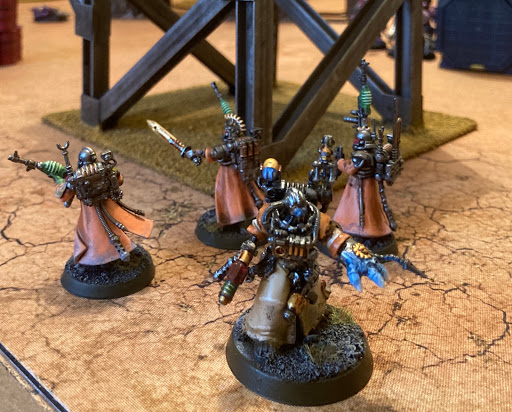 Sek Decima continued to scan his auspex array over the area, guarded by the last of the Vanguard, the fear centres of their brains overridden. At last, a blip, a find! He reached into the dust with his powerfist, gingerly pulling the strange item into his eyeline. No time for a thorough scan, as the Emperor's Children cut down his bodyguards with their blasphemous sonic weapons. Over his shoulder he could see the corrupted Terminators approach, barely recognisable after uncounted years in the warp. 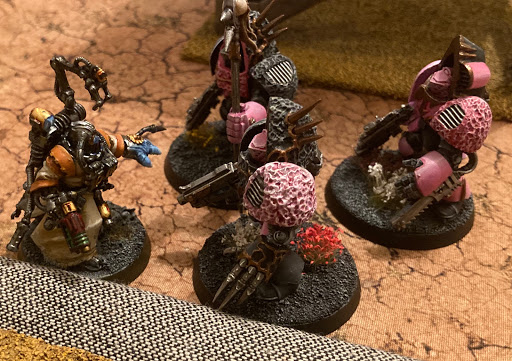 He uttered a prayer to the Omnissiah, and placed the strange item into a teleportation capsule, flicked the switch and watched as it flashed away into the ether. The mission may have been failed, but Sek knew that it had been worth it, they had found what they had come for. He steeled himself, cutting off any last traces of emotion in his enhanced mind, as he waited for the inevitable. He could only hope that when the recovery team scoured the planet's surface, they would find his cranial casing intact and he would be able to see for himself the archeotech he had recovered.
And that was the end of the game. A win for the Emperor's Children, granting them an extra requisition point and a whole load of experience points across the board. The Noise Marines picked up the Reaper agenda, putting them over the mark for Blooded, becoming Veteran Warriors for their Battle Honour. Thankfully I didn't roll any ones for my units, so all of them gained the experience for playing the game. Datasmith Decima picked up some bonus experience for finding some Archeotech and I awarded him the Marked for Greatness bonus, putting him into the Blooded category. In line with my goals to collect ancient relics, and because he literally just dug it out of the ground, I rewarded him with a Crusade Relic - the Laurels of Victory - granting me an additional 2 command points while he is alive. In my mind it is some kind of rare cortex cogitator upgrade that spouts out tactical advice into his brain.
Overall we had fun with Crusade, playing in a nice narrative spirit. It does have maybe a bit more admin than it really needs during the game, and we made a few mistakes along the way, but I think this will become easier to deal with over time, so we're definitely going to give it another go. We found the real meat of the narrative in this stage of the Crusade came from the agendas we picked - once the mission was won or lost it was still important for us to keep playing to see who among the Emperor's Children would be showered in glory, and if Sek would managed to return with that archeotech. I imagine the experience would be reduced somewhat by just picking purely the 'strongest' agendas for levelling up your units every time. (I certainly don't think it was 'smart' to pick the ones I did, but it made sense!). Hope you enjoyed this look at Crusade in play, and stay safe out there.
Posted by Redtoof at 14:58