Hello!
Back to some 40k, and this time it's some bang up to date new toys, the Adeptus Mechanicus Pteraxii Sterylizors and Serberys Raiders aka Flappy dudes and Horsey boys. (Spell checker absolutely hated that sentence - and yes I know the Pteraxii don't really flap and the Serberys are more akin to dogs than horses, and that skitarii probably don't have much in the way of a concept of gender.) 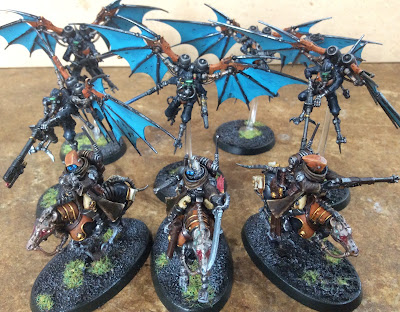 Firstly, I have to say I love these new models and the strange anachronistic design choices. I've always been a fan of the weirdness of the AdMech, and this lot really pushes in that direction. Even though I love the look I wasn't sure if I was going to get some, until I found out that the mixed up pseudo-historical aesthetic annoyed SorcererDave, so I knew that I had to have some and bring them on his channel!
Anyway, first up, lets look at the Raiders: 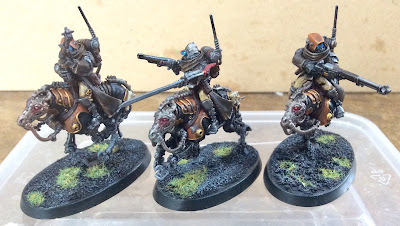 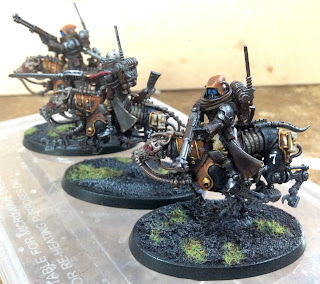 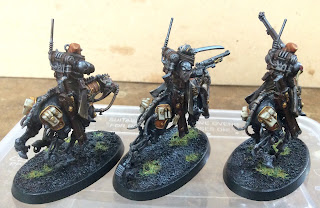 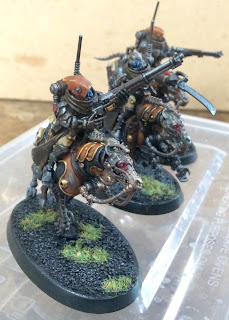 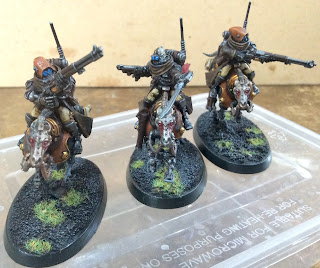 These were quite fun to paint, I got to do a few different metal effects, some dirt and grime, some glowy bits and some beat up brown coats. I reasoned being outriders they might not be wearing bright orange, so opted for a slightly toned down look for them. It was an interesting technique to try, darker leathery look with some much lighter but inconsistent highlighting to represent the scuffing up and fraying of the material on the fold lines and edges. I've seen it done much, much better elsewhere, but I'm pretty happy with my attempts. Overall I'm pleased with the result, and it didn't require much repainting or tidying up, surprisingly.
The Pteraxii however... 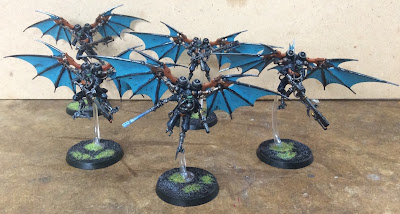 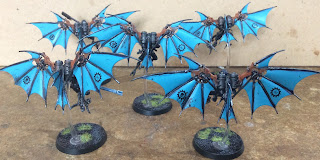 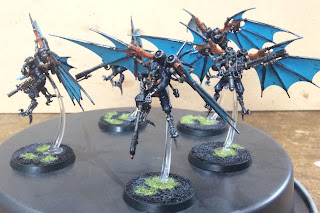 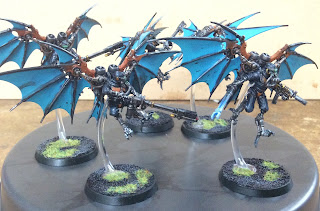 These were a bit more of a tricky prospect. For a start they are fairly fragile and I lost a few bits during drybrushing. I was pretty happy with the black rubbery suit look for them and the splash of orange for the armour panels, but it took me some time to be satisfied with the wings. I initially tried going much lighter to almost white with a stippled/drybrushed cloud effect, but it just looked a bit rubbish. After that I washed the whole thing with layers of blue, which was better but still too messy. I finally just painted over it with a few layers of a gradually lightening sky blue, before adding some specks and splashes of black to represent dirt and damage and provide contrast. The transfers on the back of the wings also helped to break up the blue. Finally they got attached to the bases with the frequently bemoaned new flight stand things. I was considering magnetising but got lazy and just glued them in place. I told myself when they all break off and prove they need them, they can have magnets!
And there we go. DONE! That's the end of that. Except it's not because having now updated my AdMech force, I decided it was time for some new, better group photos, so that's what's coming to the blog next time... 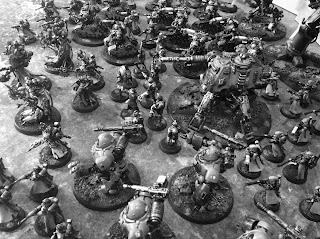 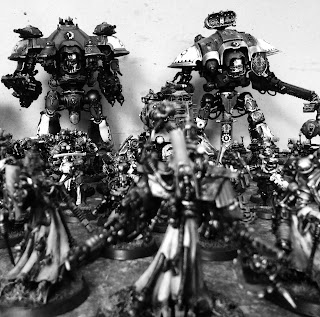