Hello!
More Death Guard! Once again, going comfortably over the 250 point mark for the month, but still an 'easy' month with a mere six models (I've been a bit distracted with a load of AdMech stuff!). I added to the characters I painted in month two and three with a couple of extra HQ choices and four of the elite Foetid Virion characters. I have decided to largely focus on heavy infantry and elite options for this army (I've got hordes covered) so these all feel like handy additions to have. 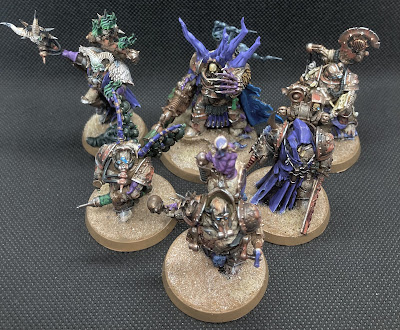 As before, I used the method of spraying brown, slapping on some bone, washing heavily in Agrax, then sponge on the metal. Since they are all characters they all got a bit of extra love with some special glowing bits or extra details, as well as another go over them with the metal for a final trim highlight. 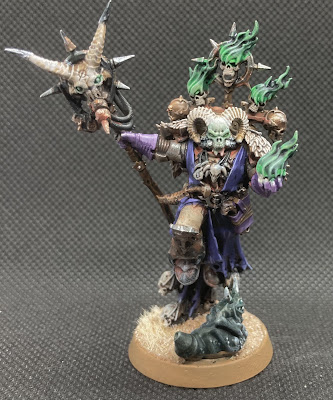 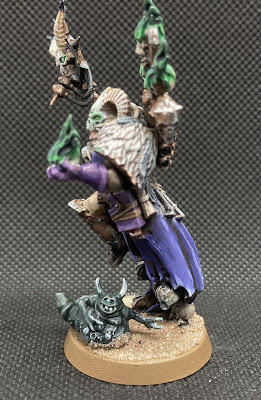 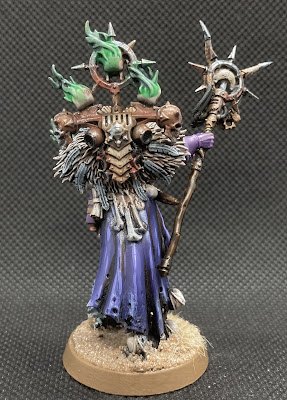 The very cool, but not in the Death Guard codex Master of Possessions model has become a Malignant Plaguecaster, with a minor conversion on the staff and addition of a chunky Nurgling on the base. Also fun with green flaming skulls. 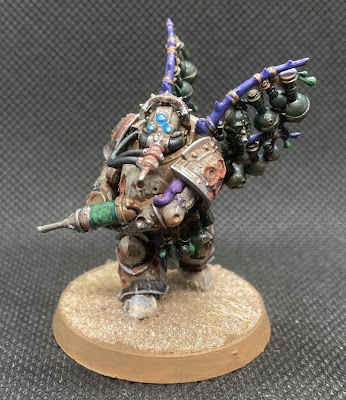 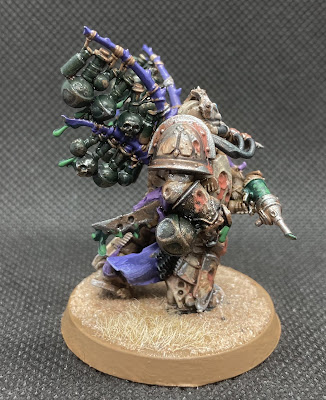 The Biologus Putrifier - weirdly I had three of this model in my collection, so I've already used most of these parts on Plague Marines, but this time I got to put the whole thing together. 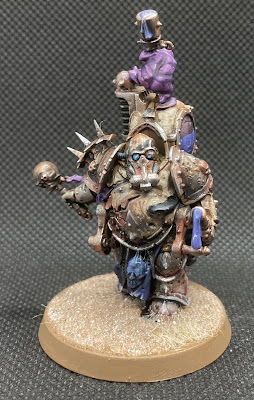 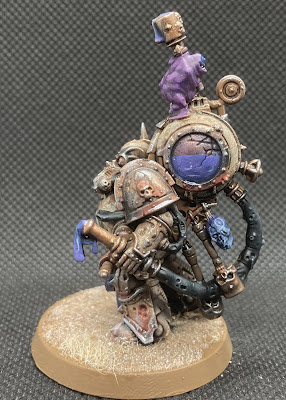 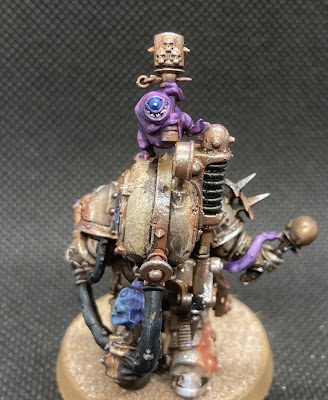 The Foul Blightspawn, and a cheeky Nurgling. I'm led to believe he's basically an auto include in any Death Guard list, so I suspect I'll be seeing a lot of him. 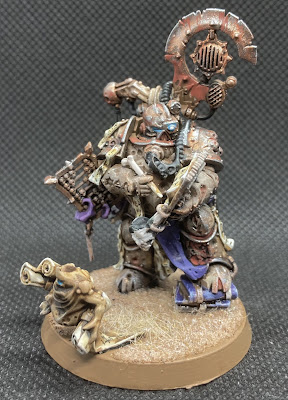 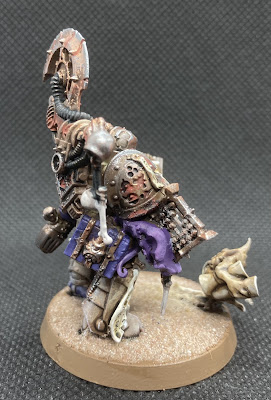 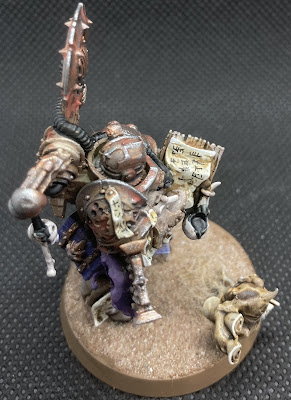 The Tallyman. Didn't really like the head so I swapped it out for a regular chaos marine one. I also 'cheated' by using a fine drawing pen on the tallys. 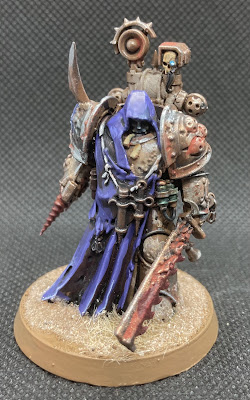 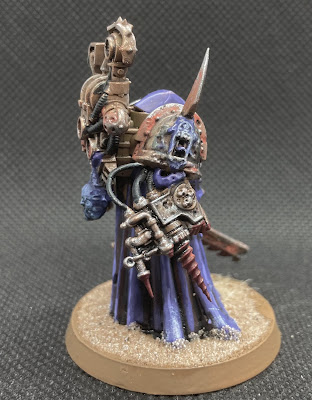 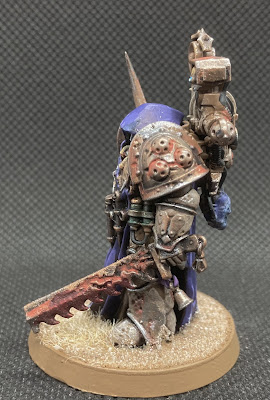 The Plague Surgeon. I think he's my favourite of the Virion models, which is a bit of a shame since he's also considered pretty much the worst of them. I'll probably try and run him anyway. 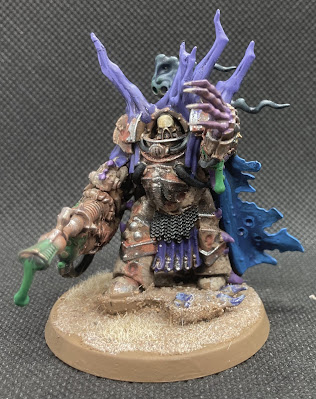 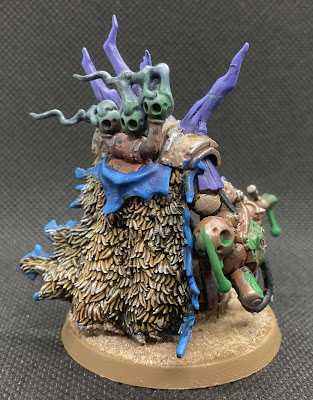 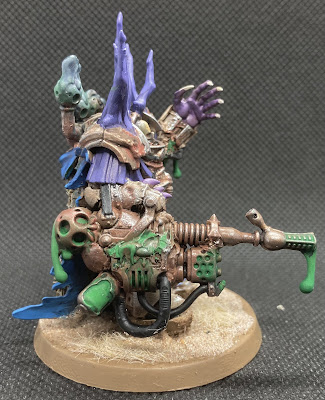 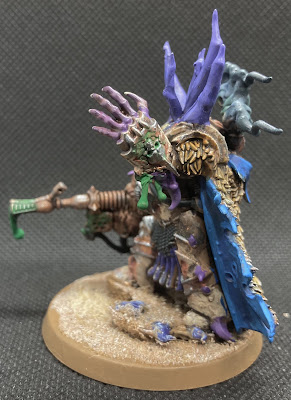 Kit bashed Lord of Virulence - made from the Lord Felthius mini but with arms and head swapped. His power fist come from one of the Greater Possessed, while his gun is from one of Felthius' Terminators, and the addition of an Obliterator 'flamer' slung underneath. Pleased with how he came out, he's a hefty lad and the huge gun and relatively small fist sells the look I think. 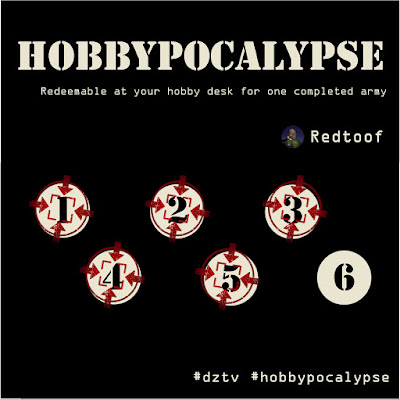 Month 5 ticked off, stamp acquired! I've already got plans for month 6 (adding some more armour), and I think realistically I'll keep going at it a bit longer to at least get through the grey/green pile. I can't wait to hit the big 2k points, play some games and take some photos of the whole lot. Speaking of photos, I got out the full command staff for the light box - both Lords, all the other characters and some of their champions at the back. 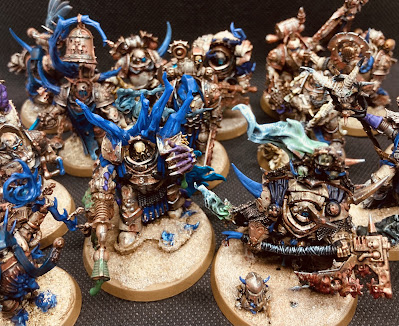 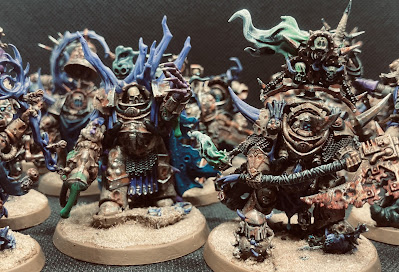 Hope you like them, and thanks for reading. Stay safe!
Posted by Redtoof at 14:21