Hello!
It's been a while since I played a Crusade game, in fact the last one in person was back in September against Narrative Wargamer Tony and his Orks. Well, this time I was back with my 'dry' Death Guard warband, The Desiccated, led by Lord of Virulence Najax the Generous.
We played the Strike for Supplies mission from the often overlooked Plague Purge mission pack (which we covered in the Podcast back in May), which involves making 'loot' actions on the objectives to score points, which infantry can do in one turn, and everyone else can do over the course of two. It also includes some new stratagems, importantly for this mission, to complete actions while shooting, and to start them while in melee.
We also used a fun battlefield twist - the Geothermal Eruption. Effectively there was a wave of molten lava coming on from the flank, encroaching up every turn, destroying everything in it's path. Fun! 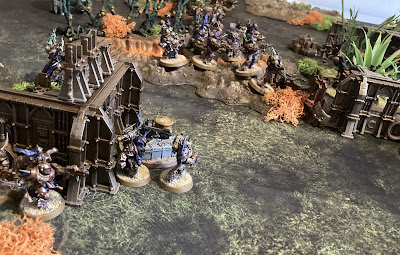 As a starting Crusade force, The Desiccated came to the battle without a bunch of upgrades, merely 65 power level of Mortaion's Anvil, and a warlord trait and relic. For agendas, we took Turn Their Hope to Rot (destroy the opponent's unit with the highest power rating - in this case the Gunwagon), Priority Targets and Survivor on one of the Terminator units (Gopherax' Anvil). I also rolled up my unique Crusade plague, which for now would be carried by Najax - Haemorrhaging Pitted Sores - effectively at the end of the movement phase any enemy in 3 inches of him would be infected on a 4+ and lose one attack from each of their ranged weapons. 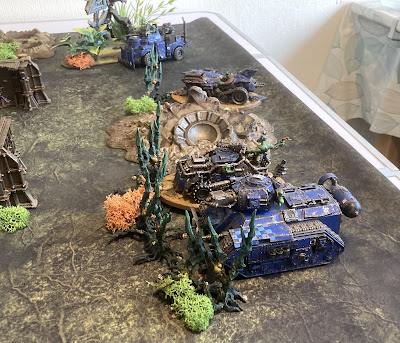 Tony's Deathskulls had a bit more experience, with battle honours for some of the boyz and extra damage on the nose drill of the Scrapjet - though it came at a cost, with the Scrapjet having suffered serious damage in our previous game, and would now be suffering additional mortal wounds against strength 8+ weapons. His agendas were Reaper, Assassins and to Secure the Centre. I don't remember all the details, but here's roughly what he had: 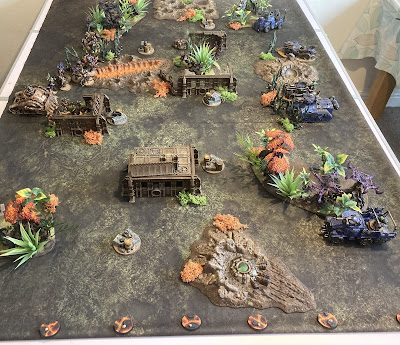 Armies deployed. The markers at the near side represent the lava flow, each battle round they would lap up the board d6 inches each, and anything behind the line of them would be removed! I put one of the Blightlord units (Crotalus' Hammer) in the teleportarium, while for the Deathskulls the Meganobz were on the tellyporta. Otherwise they were all mounted up, ready to roll onto objectives.. I looked to control the centre and my left flank, leaving the right to the lava. We rolled, and I got first turn.
The Desiccated moved up the board, looting a couple of objectives and putting some firepower down to damage several of the Ork vehicles, but not destroy any. The Terminators advanced up the centre to swing either way depending on the threat. 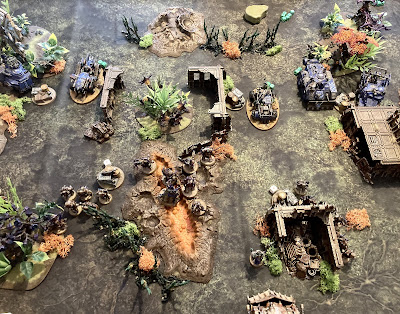 The Deathskulls movement was much more rapid, with the Trukks starting to claim some loot, while the buggies zoomed up to engage my lines. The Gunwagon was more cautious, having taken damage from the Plagueburst Crawler, but was repaired by a Mek and Zzapped one of the Blightlords with it's kustom gun. (It hits automatically with 2d6 strength, and on a roll of a 9+ deals 3 mortal wounds instead of normal damage - and the Gunwagon can fire it twice.)
The buggies both charged into Plague Marines in combat next to objectives to make it difficult for me to score points. The Scrapjet tore through the Marines with it's D3+1 damage nose drill, but left the champion alive to cause it serious problems with his power fist. The Snazzwagon and it's opponents were less dramatic, with no serious damage caused. 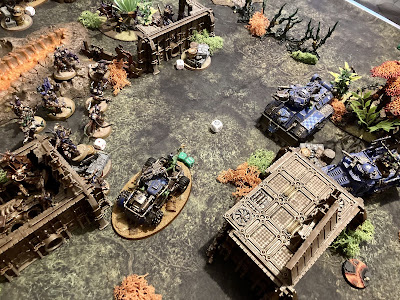 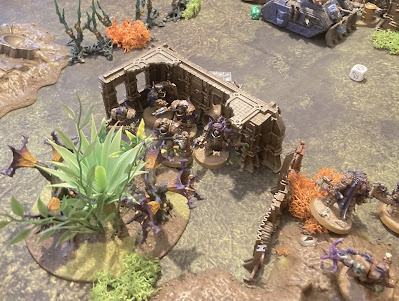 With buggies on my objectives I gave up on looting this turn, resolving to clear the lines and stop one of those Trukks from completing it's action. To that end the Plague Marines on the far left marched up to engage the Trukk, while their Blightbringer companion headed to the damaged Scrapjet. The Blightlords provided a big of a wall for my characters, with their shooting intended to take out the Snazzwagon. I also decided to employ a Blight Bombardment - represented by the old Scatter die, which would deal mortal wounds to all the orks in a 6 inch radius, unless they avoided it by moving backwards - towards the lava! Finally in movement I dropped in the last Blightlords, finding a very handy central point in a ruin that let them claim some loot as well! 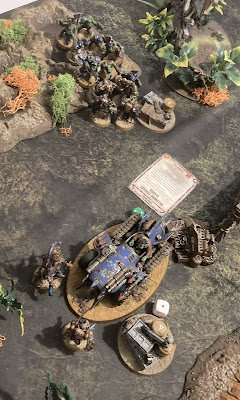 Shooting removed the Trukk and the Snazzwagon, thanks to assorted plague weapons, and that left the Blightbringer to run in and bong the Scrapjet with his two damage bell! BONG! The Gunwagon still stood however, thanks to the force field deflecting shots from the Plagueburst Crawler. 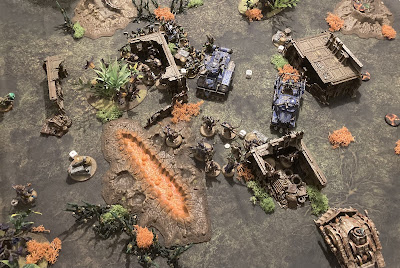 Ork turn two, more movement and deployment of boyz to try and clear the newly arrived Terminators, along with the boss! Some damage was done with shooting, before... 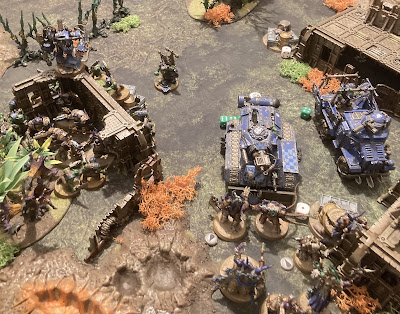 WAAAGH! Charges across the line. The Gunwagon went into the survivor Terminators, now down to two models, while the Boyz and boss went into the fresh unit. The Trukk piled into Plague Marines to once again disrupt objectives, while elsewhere the Weirdboy charged in to the Plague Marines on the far left. The Boss swung first, taking down one of the Blightlords, but they interrupted, attacking the boyz with a bunch of stratagems played on them, taking out 10 before they could swing! The remainder failed to do much damage. The Death Guard are disgusting and resilient! 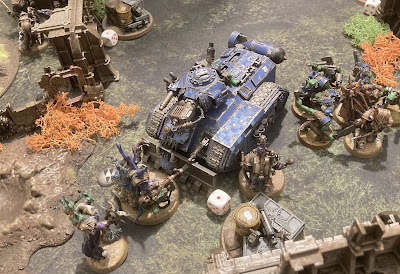 My turn three, and the Blight Bombardment went off, spreading wounds over the remaining vehicles and big mek. Shooting once again failed to down the Gunwagon, though I did manage to take out the last Trukk and leave the boyz vulnerable to some plague weapons. The Lord opted to charge into the Gunwagon, and took 3 mortal wounds in overwatch for his troubles, and still failed to kill it! The Blightlords in the centre had better luck, removing the rest of the Boyz, while Plague Marines nearly removed the remnants of the other Boyz mobs. 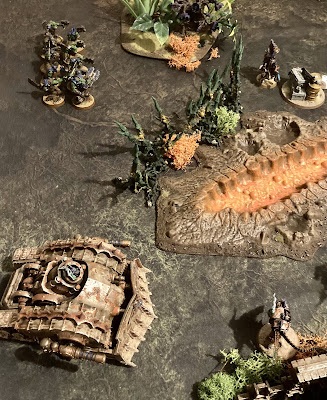 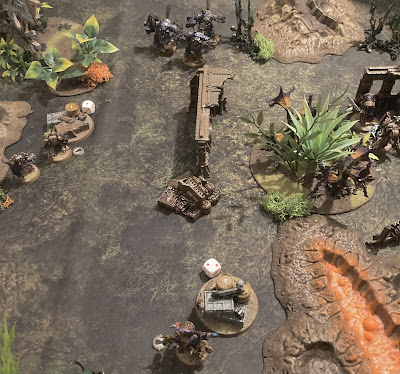 The Deathskulls were starting to run out of assets, but they did have the Meganobz to tellyport in, and a unit of Boyz suddenly showed up from behind the Death Guard lines (Unstoppable Green Tide). Tony was a bit behind on points, but it is Crusade so there's always XP to play for, and I had a few characters to kill. Sadly for him, the Meganobz and the Boyz both failed their charges! Very unfortunate, but there was still combat...
In shooting the Gunwagon had taken another two wounds off the Lord of Virulence. With one wound left he struck out with his Plague Claw to finish the tank off - and it exploded! Now, Gunwagons explode on a 4+, and do d6 mortal wounds in a d6 inch radius... 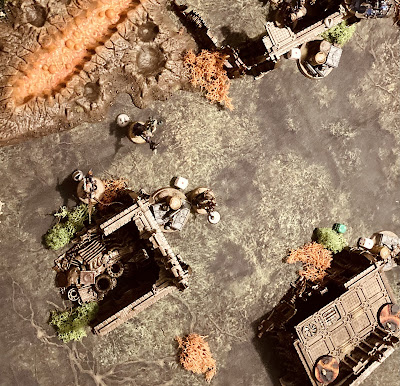 Lord of Virulence dead, Plague Marines dead, Foul Blightspawn and Malignant Plaguecaster both down to one wound, 'survivor' Terminators down to one would left! Big boom!
In my turn four, I turned the screws a bit, my remaining units largely looking for loot of finishing off some units. The PBC did some work to reduce the Boyz to a single model in shooting, for the lone Terminator to finish off, while the other Blightlords krumped the boss. There wasn't much for the Orks to do in their turn with only the slow Meganobz remaining, so they shot the one wound Noxious Blightbringer to death for some Assassins XP, and killed some Plague Marines in melee. 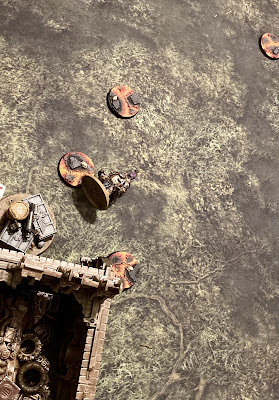 Going into the last turn, it seemed I was too lazy with placement of the Foul Blightspawn, as the lava advanced by 6 inches and engulphed him in molten rock. Whoops. 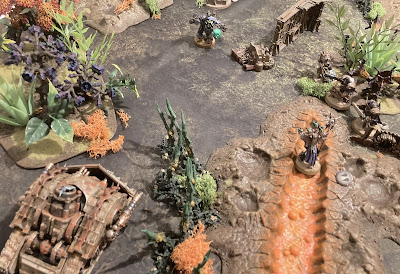 Elsewhere however the forces of Nurgle were controlling the battlefield. I brought all guns to bare on the Meganobz, finishing them off with the Crawler. A solid 35 - 10 victory for The Desiccated, in a game full of explosions and environmental hazards!
As always, Crusade is a fun experience regardless of result, as you can still fight for XP and to avoid taking out of action tests. One of my Plague Marine units was so badly beaten up they missed out on their XP this game, while all of Tony's Orks survived 'unscathed'. He also picked up enough XP on the Meganobz to level them up, gaining Fleet of Foot (which would have had them pass their charge move on turn three!). For me both units of Terminators picked up a lot of XP, and it was spread out through the force, but the Warlord managed to level up by turning their hope to rot, or in this case, a giant fireball. He has taken his first steps to daemonhood (or spawndom), recieving a Chaos Boon of Clawed Feet for +3 movement - should be useful for getting up into range to spread my plague!
Hope you enjoyed the read - with any luck there will be more Crusade action at some point. Thanks for getting this far, and stay safe!
Posted by Redtoof at 21:07