Hello!
I feel like almost everything I've been putting up here recently has been Orks or Death Guard. So now time for something completely the same! I took my 'dry' Death Guard, The Desiccated, against Narrative Wargamer Tony with his Deathskulls.
In an unusual move, Tony asked if we could play a 2000 point matched play game to prepare him for a local event, so we were playing Sweep and Clear from the GT pack - corner deployment, five objectives and with the ability to claim objectives to score even after you've walked off. More ways to play 40k indeed! 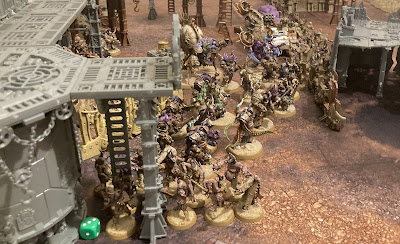 My list was kind of thrown together from all the Death Guard units I'd built but not used yet, along with a few favourites. As such it's not very optimised, the core plan is a big blob of terminators in the middle being buffed and protecting a load of characters, Possessed in a rhino with the Biologis Putrifier to tell them to do mortal wounds, and a bunch of little units to score points and be annoying. As usual I was taking Mortarion's Anvil, and this was a single battalion, giving me ten CP to start after a bonus relic and warlord trait.

For my secondaries I took the mission specific Direct Assault (basically hold the centre objective at the end of your turn) and Stranglehold since it's a five objective mission, and then I attempted to bank on Death Guard survivability with To The Last. This would be the Blightlords, the Possessed and the Plagueburst Crawler. 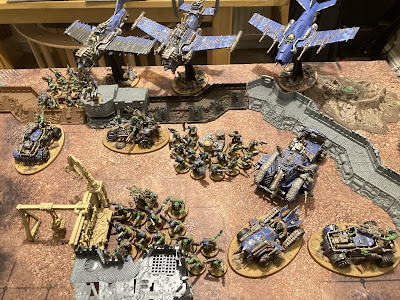 Tony's list featured a whole lot of vehicles, plus some boyz for holding objectives, and notably three flyers which was made illegal in 2000 points matched play games literally the next day! Though there is definitely some powerful stuff here it's by no means 'the' meta list that had been winning tournaments everywhere, consisting mostly of models bought when they were pretty rubbish. As Deathskulls, he's got a single reroll to hit or wound on everything, a 5+ save against mortal wounds and Obsec on all infantry. He's running his Wartrike as the warlord so of course he's got a Speed WAAAGH! to call. This list is a battalion and an outrider, and there's some extra toys dished out so he's starting with 5 CP.
HQ: Deffkilla Wartrike ('Ard as Nails, Shokka Hull), Weirdboy (Da Jump, Fists of Gork, Kunnin but Brutal, Super Cybork Body), Weirdboy (Da Krunch, Jabbin' Fingerz, Scorched Gitbonez), Warboss (Big Gob, Da Ded Shiny Shoota, Powerklaw)
Troops: 3x 15 Ork Boyz (Big choppa, big shoota)
Elites: 5 Meganobz (1 combi-skorcha)
Fast Attack: 2x Boomdakka Snazzwagon, Megatrakk Scrapjet
Heavy Support: Gunwagon (3 Big shootas, Da Booma, Wreckin ball)
Flyers: Burna-bommer (Skorcha missiles), Wazbom Blastajet (2 Mega-kannons, force field, 2 Supa shootas), Dakkajet (additional Supa shootas, More Dakka)
Tony took Direct Assault and Stranglehold the same as me, then picked up No Prisoners for his third, reasoning that I had a decent amount of wounds in infantry models. 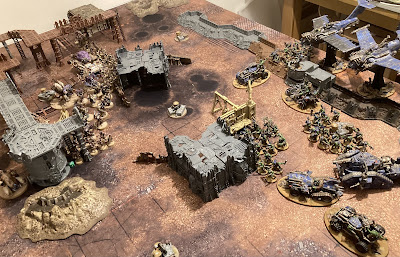 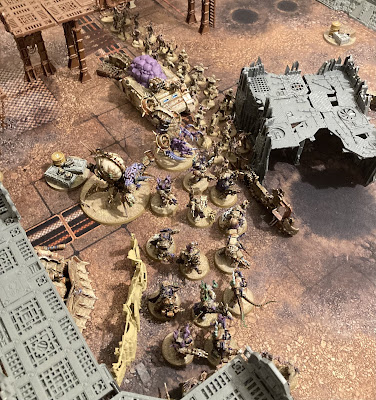 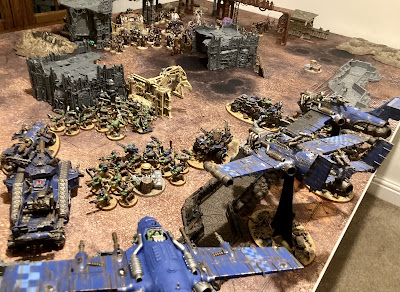 Deployment. Not much to say really, nothing started off the board, the Meganobz were in the Gunwagon and my Possessed and Putrifier were in the Rhino. We did clarify that the middle ruins were obscuring as if they were 5 inches tall, not that it would have a big effect with all his speed.
We rolled for turn one, it went to the Orks. WAAAGH!!! 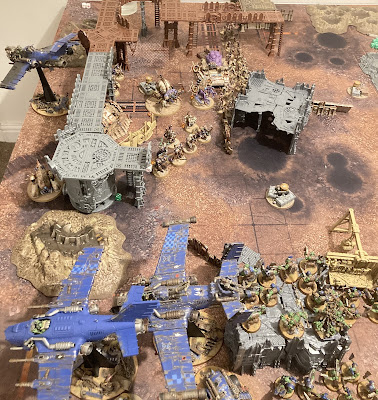 The Speed WAAAGH! was indeed called, and everything zoomed around to get shots into my army. I took a bit of a battering from mortal wounds from the Burna-bommer thanks to being bunched up, and some chip fire removed a unit of Pox Walkers, then a withering barrage of improved AP guns hit the Blightlords. When the smoke cleared I still had four left, including paying two CP to avoid morale. I wasn't sure if I had gotten away with it or not - I think it could have gone a lot worse! Interestingly Tony opted not to push out onto the centre and my left flank objective to avoid giving me easy charges. This meant no Stranglehold or Direct Assault in turn one. 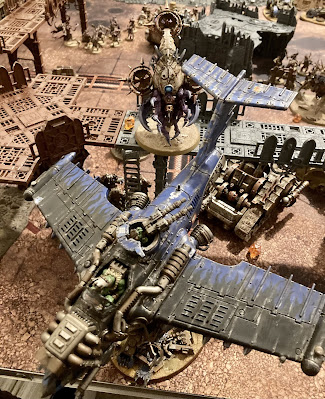 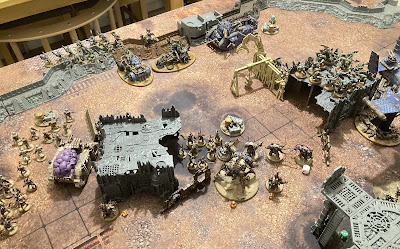 My turn one - marching as much forward as possible and trying to remove the planes! Importantly I got Miasma off on the Terminators and the Tallyman told them to get +1 to hit - which counters the Jabbin Fingerz they had been poked with. Shooting downed the Wazbom Blastajet and damaged the Dakkajet, while a charge from the drone halfed the wounds on the Burna-bommer, it's Ramshackle rule saving it. Direct Assault and Stranglehold scored, as well as one big threat removed, but perhaps not enough damage. 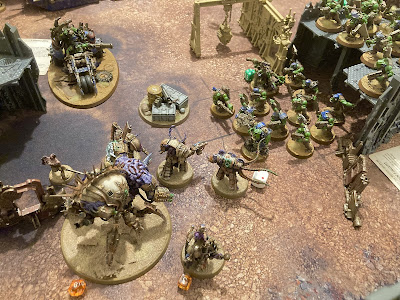 Ork turn two, the Boyz poured forward to claim the centre and the left objective (I just picked up the unit of cultists that were claiming it against 15 Boyz on the charge!) Shooting was much less effective this turn but another Blightlord fell, I lost some more chaff and the Bloat-drone was reduced to 3 wounds by withering fire from the Dakkajet. 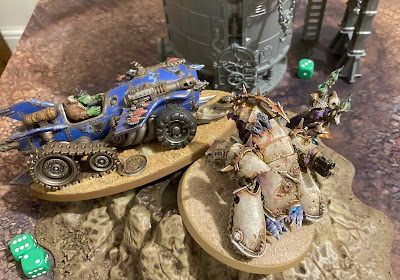 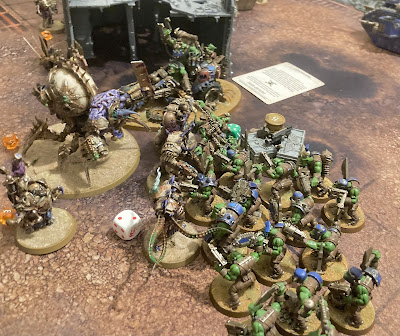 In the charge phase the Scrapjet got into my Blight Hauler using ramming speed, and with it's attacks combined with mortal wounds reduced it to a single wound. As mentioned, Boyz on the left removed cultists, while in the centre Boyz and the beefy Weirdboy charged the remaining Blightlords and the Deffkilla made it into the Terminators and the Prince. No one was in range to be fight lasted from the Foul Blightspawn, but they were all counting as not charging, which made things interesting. I used the interrupt to fight with the Prince, chopping a chunk out of the Wartrike, which would have killed him if not for his -1 to wound, then fought with the Blightlords before the boyz, using Haze of Corruption to make damage spill over on the two flails - they did 20 wounds between them to shred the mob entirely.
I definitely got the better of that central exchange, but sadly thanks to the Deathskull rule the Weirdboy is obsec and denied me the objective! 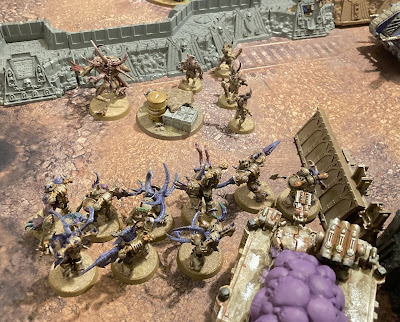 In my turn I aimed to claim back the central and left objectives while trying to remove some buggies. The PBC whiffed a bit here, but the Blight-hauler in melee did kill the Scrapjet with it's melta, which then exploded to kill it right back. On the left flank the Possessed got out, got buffed up by the Biologus Putrifier, then absolutely minced the Boyz that were in front of them. 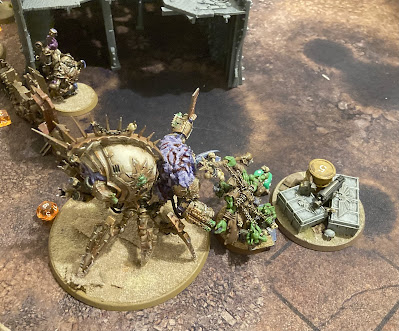 In the middle though I made a critical error - with the Deffkilla Wartrike told to fight last by the Blightspawn, I should have used the few remaining Terminators to kill the Weirdboy, then attack with the Prince. Instead I went with the Daemon first, crushing the Wartrike. However Orks is Never Beaten, so the Deffkilla fought immediately on death to kill the terminators, leaving the Weirdboy alive and securing the objective! That meant no Stranglehold, no Direct Assault and 15 points for Primary on Tony's turn, in addition to the lost 5 for To the Last! Massive swing in the game that looked like I might be right in it. 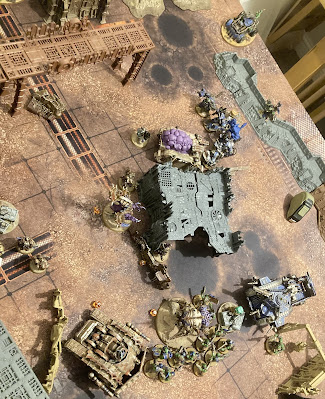 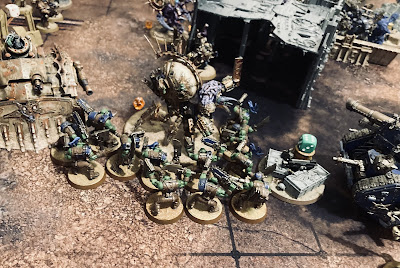 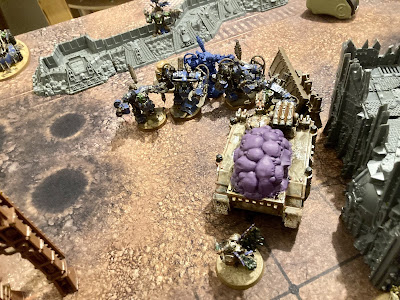 In turn three, with a fair amount of shooting left Tony took out the rest of my chaff units and the Malignant Plaguecaster, who had been sheltering behind the Blight-hauler. Then the Meganobz disembarked and smashed up the possessed, using Hit 'em Harder to counter Disgustingly Resilient and wipe them out to a man/daemon. In the middle the last Boyz mob went in to the Prince and the PBC to tie them both up and ensure the objective was held even after I smashed the Weirdboy.
After this I ran through my turn three movement phase but after talking it through a bit we didn't carry on. The Orks were too far ahead on points for me to catch even if it went perfectly. I still had some decent units but the Daemon Prince and Bloat-drone were both badly damaged and I was running out of things to hide characters with. Ultimately we think it would have ended with the PBC sitting on my home objective while a load of buggies and planes owned the rest of the board. I didn't get a final score, but it was a big win for the Orks!
Interesting game, it felt like the Death Guard did annoying Death Guard things quite well and were right in the game initially, and the Orkz were putting out a lot of dakka, but what won it for them really was their movement, obsec and a few key combats. What could I have done differently? Well, most obviously I should have attacked with the Terminators into that Weirdboy! I think sending the Drone back for the bommer was a mistake, as it wasn't available to charge anything turn two and might have made the difference in the centre if it was hanging about (and able to heroically intervene six inches).  I think my third secondary pick was wrong, I should have taken a killy one since two of my To The Last units were going forward into melee. As initially mentioned, this list isn't really very optimised and wasn't really built for any of the secondaries. I could have done with having my punch spread out a bit as well - the Possessed were a bit of overkill vs Boyz and then all died to Meganobz so probably could have been two units of five, and the Blightlords might have benefitted from the same?
Tony's list is of course now illegal, but with a bit of modifications it's a pretty nice balanced Ork list that's certainly got some teef. I think he's planning on putting the Gorkanaut back in after it appeared in our Ork vs Ork game and was very scary on the Speed Waaagh! Hopefully he'll do well at his event!
Anyway, thanks for reading, hope you enjoyed, and stay safe!
Posted by Redtoof at 14:01