Hello!
Time for a bit of matched play with a little one day tournament over at Grim Dice Tabletop Gaming in Grimsby. The event was billed as beginner friendly, with everyone getting the 10 points for painted regardless of actual painting. This meant that some people were taking some slightly silly lists or new armies which was a bit of fun. Personally I prefer to only play with painted models but it's nice to see a bit of variety in the style of events being run.
Anyway, I was running a variant of my Green Tide Snakebite list, toned down a bit in terms of boyz units to give me a better chance of getting through the games, and giving a bit of target variety if I came up against some newer players with an army that might struggle against just Boyz. To that end I put some Meganobz in there, and brought the KFF Big Mek as well to give him another go and see if I could get some extra survivability our of the Boyz. With the extra patrol and a bonus relic and trait the list starts with 8 CP.

I'll not do a full report for each game, just a quick summary, partly because it was quite a lot of 40k crammed into the day and I'm not sure I can remember it all, and partly because I don't want to spend all week writing this!
Anyway, game one was against Rick and his Orks! Green on green is always a good laugh, so it was a good way to start off. It was Rick's first tournament, but he obviously knows the game as his list was quite a scary (and great looking) Speed Freaks/Freebootas combo! A whole load of buggies and bikers, plus a Boomer Gunwagon and a pair of jets - Dakka and Wazbomb. Having been on the receiving end of Tony's Deffskulls Speed Waaagh! I was prepared for this one to hurt! The mission was Scorched Earth, and the Snakebites got turn one... 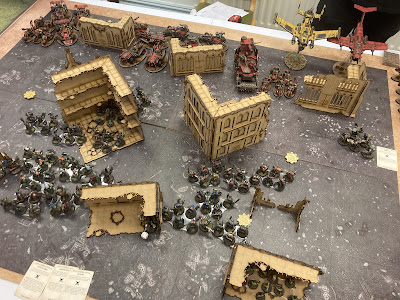 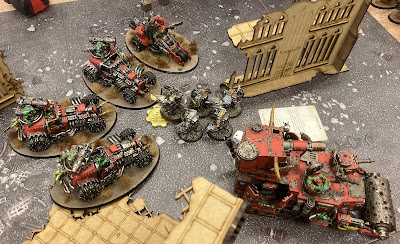 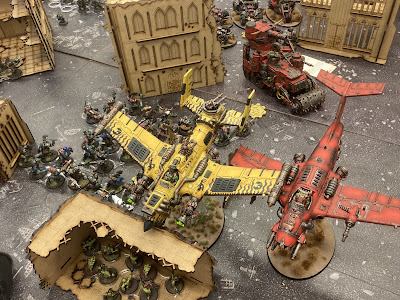 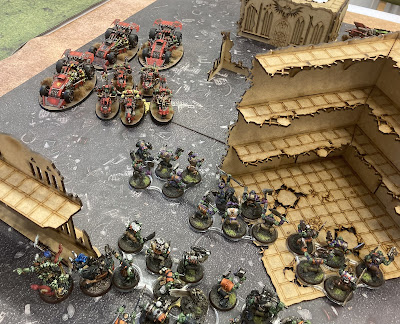 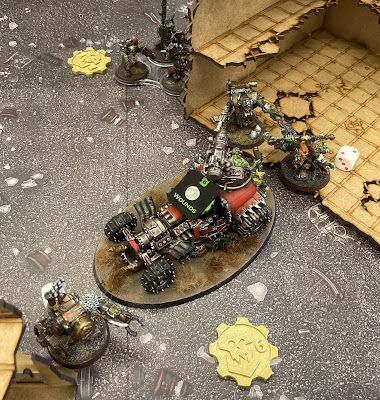 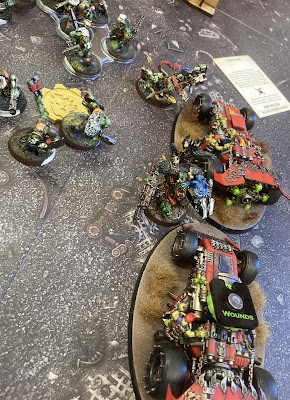 I was quite lucky to get turn one charges from the Kommandos and the Jumping Meganobz, which did some damage and forced a response. I took some heavy casualties in the turn one and two shooting phases, but though I lost a lot of Boyz the Beastsnaggas powered up and killed the wagon and a some buggies, and we discovered that Warbosses are really good a beating up buggies - hitting one 2s, wounding on 2s with their x2 strength weapons and ignoring ramshackle. Ultimately I was able to take board control and the win, leaving just the planes flying around to wrack up some extra points for the Speed Freaks. Here's the score card: 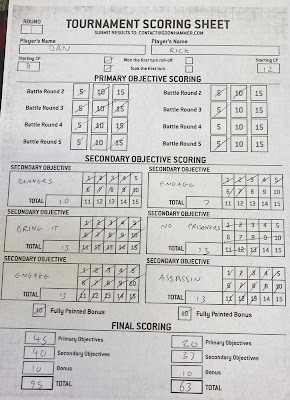 So, sitting on 95 points put me on table two against Jack and his Drukhari. He was running what might be described as an 'old meta' list, running plenty of Wyches, Incubi and a Trueborn squad in Raiders and three killer characters, Drazhar (master of blades) and beefed up Succubus and Archon. Hellions, Reavers, Scourges and some Venoms meant there was plenty of mobility and a Ravager rounded out with a big more dark light shooting. The list had obviously taken some hits in the balance update but it still had a lot of stuff in it! The mission was Overrun, and I once again got first turn. 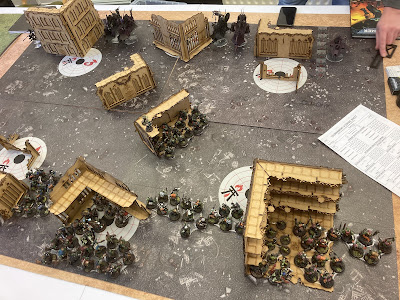 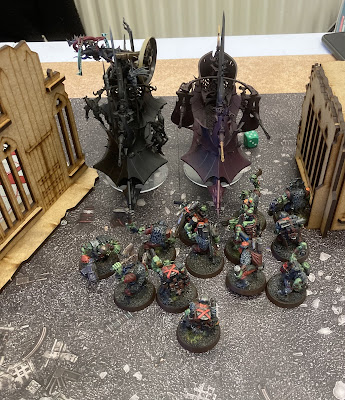 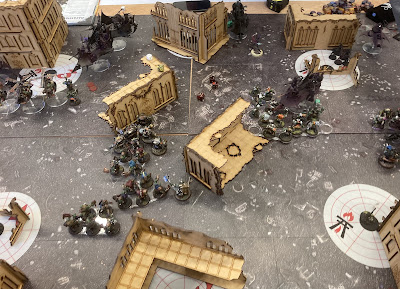 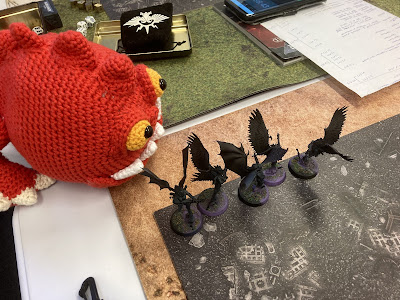 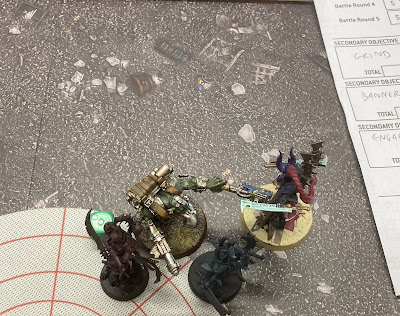 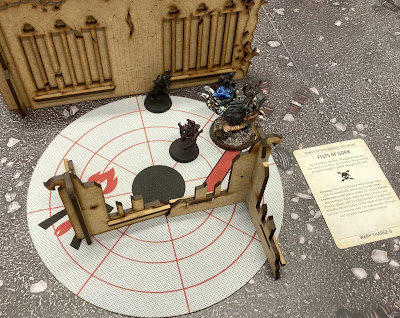 This felt like one of those 'it was close until it wasn't' games. Once again the Kommandos got a turn one charge to put on early pressure, and the Boyz gave me some good early board control. The Snakebite transhuman-lite along with T5 proved very good for me, causing some of the Drukhari melee units to underperform. The big shift happend in Drukhari turn two when Wyches, Incubi and some killer characters got into two of my basically full strength boyz units at once, making them both fight last. It was a big mistake on my part, I should have used one unit to screen the other from charges. I also got a bit lazy with screening in the back, as you can see my squig was staring daggers at the Scourges who found a gap to pop in and do nasty things to Grots. I'll also say that after this game I'm totally behind 12 point Wyches. Their 4+ in combat and assorted drugs mean the just survive much better in melee than T3 suggests - Redtoof was unable to clear a unit of 5 off an objective even with Brutal but Kunnin. 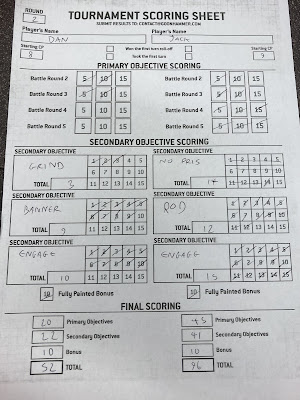 Scorecard. As you can see, not very close at the end, but not a total blank on the score. In this game I absolutely missed the shootas that I would normally take instead of the Meganobz, their overwatch could have been critical in a few places and having more bodies would have helped massively.
So going on to game three with a win and a loss, I drew against Sam and his Tau. While the last couple of games were against generally strong 'meta' lists, this one was absolutely a hard counter to me. His list had a smattering of infantry and markerlight support, some Stealth Suits, a big unit of Crisis Suits all with burst cannons, a Coldstar with all burst cannons, and the Ta'unar Supremacy suit! That's a lot of strength 5 multi shot firepower, and strength 8+ blast on the big suit. The mission was Sweep and Clear, and the Tau got first turn. Gup! 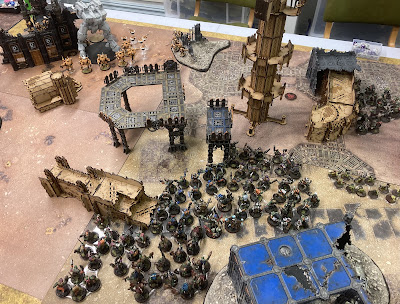 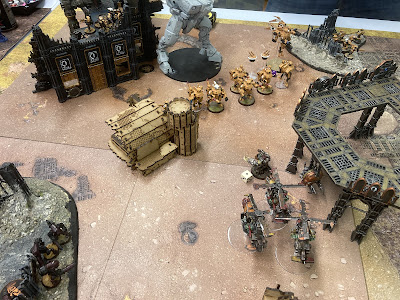 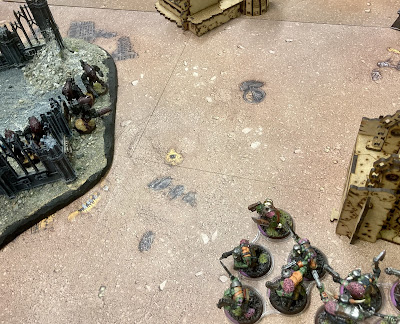 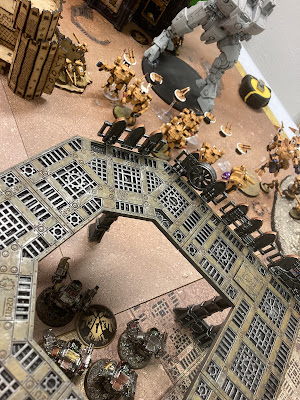 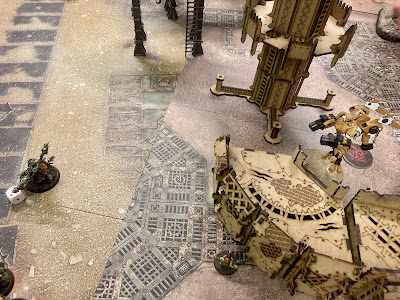 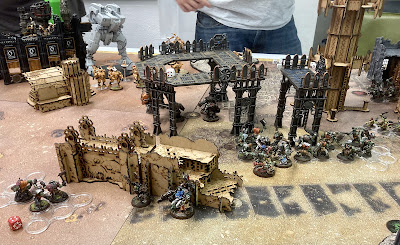 I think after the first shooting phase it was pretty clear how this game was going to go, as I lost about a third of my army, while the Tau were still several turns of movement away. I think I played reasonably well to salvage some decent points, and I rode my luck in places - notably the Meganobz Jumped onto the central objective on my turn one and somehow one of them survived the entire Tau shooting phase. I also failed a few key charges though which could have made it more interesting. I was particularly pleased with myself on the turn the first Kopta unit arrived and I successfully baited Sam into not firing overwatch from the battlesuits - making it look like the Deffkoptas were going to charge them while declaring into their supporting units with my other Orks and then at the last moment declaring the charge on Stealth Suits in the opposite direction. Kunnin! 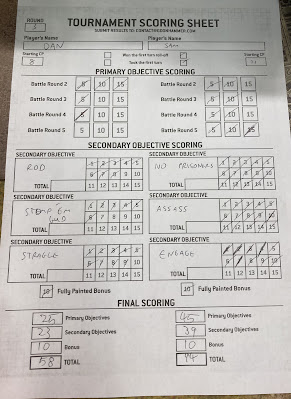 So here's the scorecard, I think the result was pretty inevitable but with some more luck I could have scored higher I think. Amusingly I managed to get ROD in all three quarters that I didn't start in, before running out of units to do it in my own deployment zone. In hindsight I think I should have reserved more units and gambled on the 9 inch charges rather than just letting them get shot up.
In the end, one win and two losses is reasonable enough for me. I was hoping for 2-1 but I think I got three fairly tough match ups, including one which was a straight up counter - always a risk when taking a pretty spammy list. In game one and three the Meganobz were great, but it was very much reliant on some lucky rolls so I think I'm still going to take more boyz instead in future variants of this list. Interestingly enough for the Green Tide list, I never took the Green Tide secondary. I think against very killy armies it's too much of a risk as they can just chip all my units below 15, but it's good to have in the back pocket against slower, more defensive armies. This event has given me more to think about for sure, but it's mostly confirming my thoughts about the list - needs more Boyz (but not against Tau!) As an added bonus, even with a million models I did in fact finish all my games just about within the time limit!
Thanks to Grim Dice for running, and to all my opponents for good games. Even against the Tau I had a laugh and learned some important lessons. And thank you for reading, I hope you enjoyed, and stay safe out there.
Posted by Redtoof at 16:21