Hello!
In this narrative game against Sharpy the forces of Forge World Ryza descend upon a world corrupted by the forces of Chaos, attempting the stop the summoning of an enormous Daemon army that would lead to untold deaths in Imperial space - and the loss of invaluable data! On the twisted, broken surface of this unnamed world, the Adeptus Mechanicus locate a portal directly to the warp, and a host of vile Chaos Space Marines using arcane powers to activate it. They absolutely must be stopped! 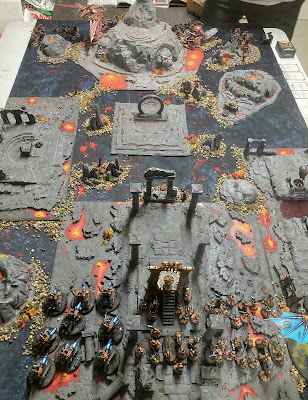 So I was told to bring 2000 points for a narrative game, and put my fate in the hands of my host! He rewarded me with a beautiful daemon world board, a 1250 point army of Chaos Marines (Alpha Legion rules) and a large selection of Daemons. In the centre of the board was a portal, through which daemons would be deployed at the start of every turn, based on a random summoning roll. The Chaos forces had four summoning units - a Daemon Prince, a Dark Apostle, and two units of Cultists containing a cult psyker each. There were also two unholy altars in the mid table. For each of these four units still on the board and two objectives not held by Imperial forces, Sharpy rolled one D6, then summoned the combined power level total. Those summoned daemons would deploy within 6 inches of the portal, then act normally for the turn. Victory would be determined based on how active, or not, the portal was at the end of the game. 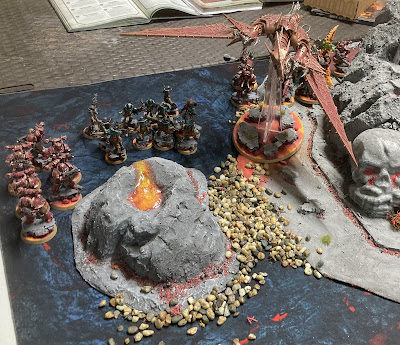 Supporting the Prince, Apostle and Cultists were a couple of units of Chaos Space Marines, a squad of Terminators, Havocs with lascannon, missile launcher and two chain cannons (and the mark of Slaanesh), an Exalted Champion, a Maulerfiend and a Heldrake. 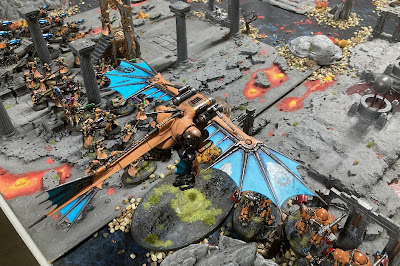 My list featured Tech Priests Manipulus and Dominus, 3 Kataphron Breachers, 6 Kataphron Destroyers, two units of 10 each of Rangers and Vanguard (with assorted special weapons and upgrades), 4 Kastelan Robots (gun, gun, fist on all of them), Cybernetica Datasmith (with the Logi holy order) 6 Serberys Sulphurhounds, two units of 5 Pteraxii Sterylizors, and the Archeopter Fusilave.
I had an assortment of relics and Warlord traits on my characters, but mostly ones to improve themselves without too much to buff the rest and confuse me! I have been playing Orks recently so I decided to go light on the command phase buffs. 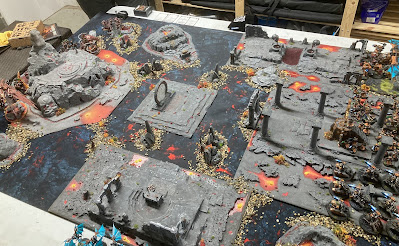 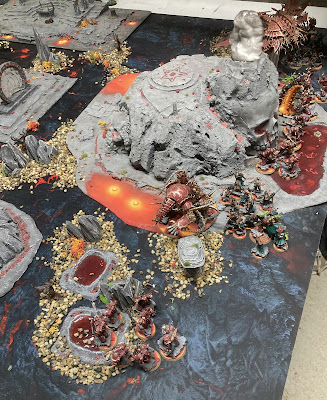 Deployment. Pteraxii are off the board initially, my forces set up to press forward and the Chaos Marines set up to protect themselves for the most part. We decided that the Chaos forces would get the first turn, so with that they promptly summoned in 20 power level of Daemons! 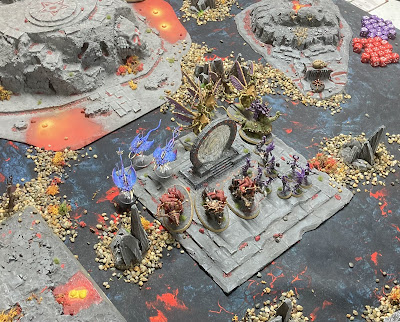 The Daemons pressed forward, supported by the daemon engines, to give me something to think about, as well as getting into position to contest the altars. 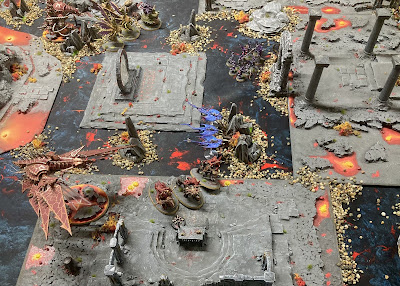 Not much in the way of shooting, but the Havocs did sneak off into the shadows to re-appear next turn somewhere. 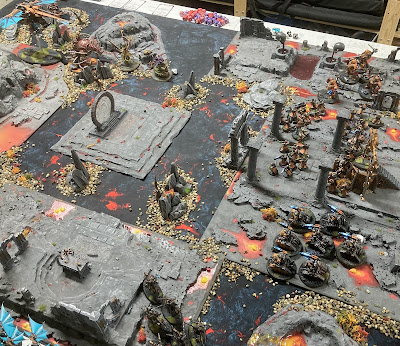 In my turn one the AdMech forces trundled forward and unleashed some heavy firepower to clear off almost all the daemons and the Heldrake - though I did lose two of my Destroyers to mortal wounds from overcharging plasma! Still, all of the summoning points were still in play, as the bomber couldn't remove a full cultist unit with it's heavy stubbers. 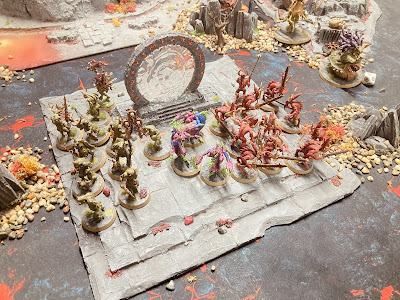 A fairly meagre force arrived on turn two, but with the AdMech army closer they would have a much bigger effect this time. 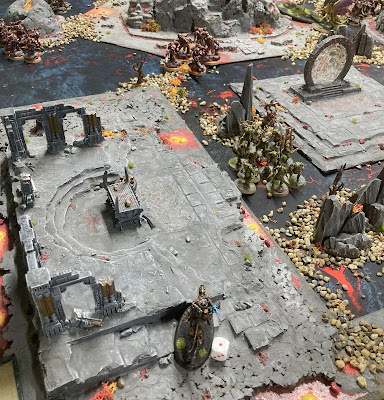 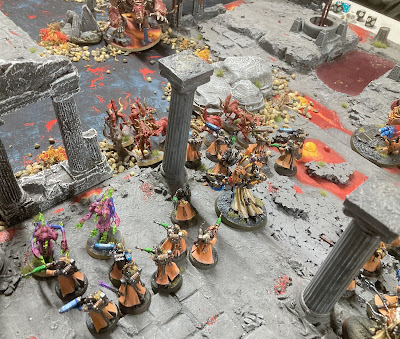 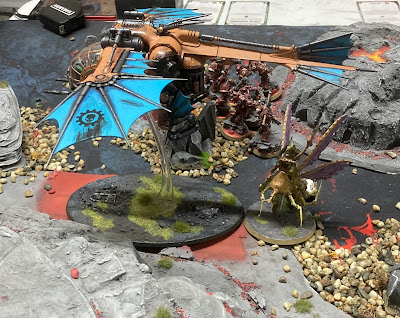 The Havocs popped in, as the Terminators popped out with the same stratagem, and split fire between the flyer and the Serberys horse-doggies, shredding them both down to one wound. Flamers of Tzeentch burned a few Vanguard before the Daemons charged in, holding up the front rank of Skitarii and slaying several more - it could have been much worse if the Bloodletters had not rolled a poor charge, a three rerolled from a two!
The last remaining Plague Drone had a go at taking out the Fusilave, but it passed the save it was called on to make, leaving it smoking but functional. 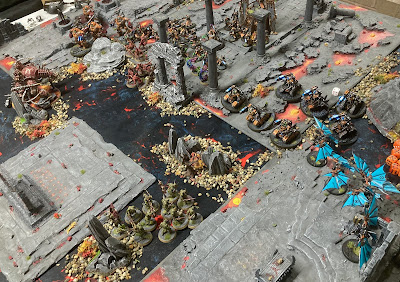 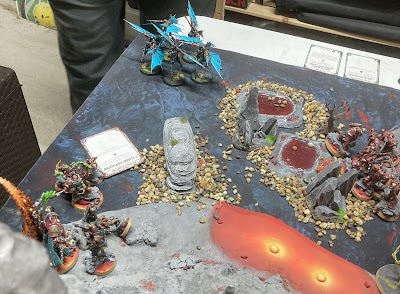 My turn, and the Pteraxii flew into position. One unit was forced to deploy outside of 12 from Alpha Legion units so dropped in by the Plaguebearers, while the other was able to get into a corner and closer to the Dark Apostle than the Chaos Marines. Phosphor torches went phwoosh and the Apostle was burned to death! The lone Sulphurhound also ran up to hold one of the altars and further reduce the next turn's summoning. 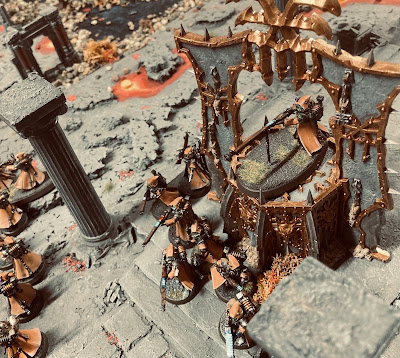 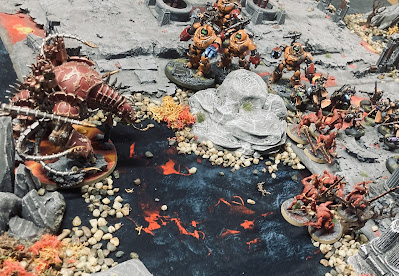 Elsewhere shooting and melee cleared the nearer daemons. I tried to get some long range shots at the Havocs from the Rangers but they sneakily concealed themselves. The Kastelans then got their protocols changed to Conqueror and went charging in to dispatch the Maulerfiend with ease. A good turn for the AdMech, but there were still threats on the board, and there would be more Daemons! 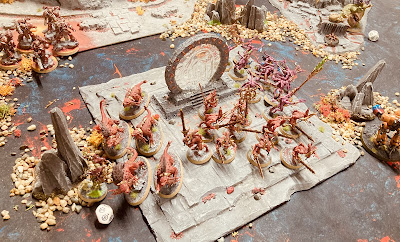 This time more Bloodletters and some Flesh Hounds to harass my lines, and a unit of Horrors to try and hold me off the altar. 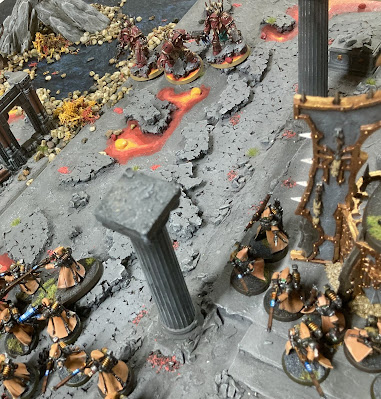 The Terminators also popped in from the warp, but the Skitarii were ready for this trick, thanks to an infoslave skull, the unit of Rangers that had been enhanced by the Manipulus fired in them and killed two. 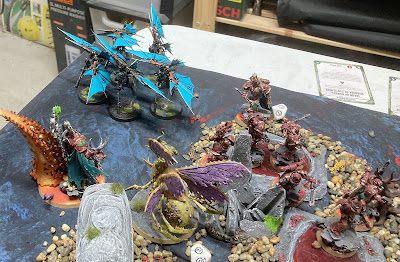 Mission accomplished for the Sterylizors who killed the Apostle, but with a Daemon Prince, and Plague Drone, an Exalted Champion and a squad of Chaos Marines staring them down, they were not going home for medals. The other squad got much luckier, the Havoc's chain cannons had a major failure and only managed to kill one of the unit. 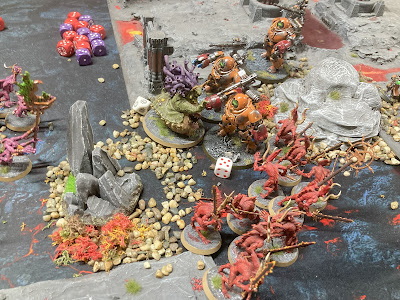 Bloodletters got in to the robots and tore one of them down, while the Beast of Nurgle got in their way a bit as well. They suffered casualties in return but stayed locked in to hold the AdMech forces off the altar for another turn. 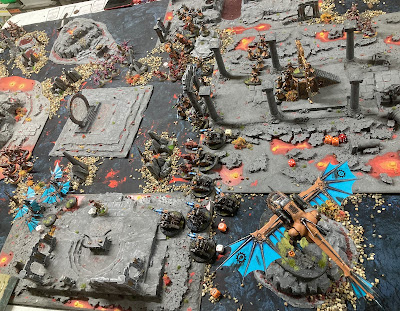 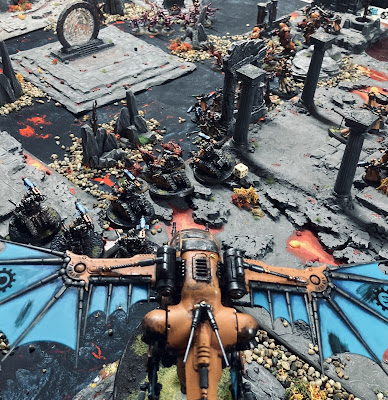 The plane returned to add some firepower as once more we cleared most of the Daemons (and Terminators) from our lines. The Destroyers whiffed shooting the Havocs, only killing one, but they did redeem themselves by charging the last daemon on the left flank altar, killing it in melee to claim it and reduce the summoning once more. The Pteraxii melted a few marines before thruster boosting up into the sky for next turn. The Kastelans shot and punched their way through the Bloodletters, freeing them up to continue marching toward the altar next turn. 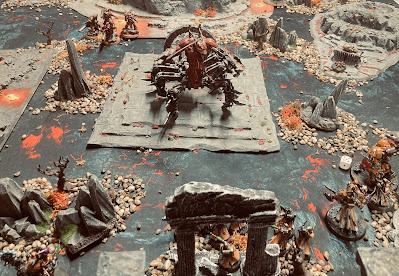 Reduced summoning gave 12 power level, all of which was used for a Soul Grinder! 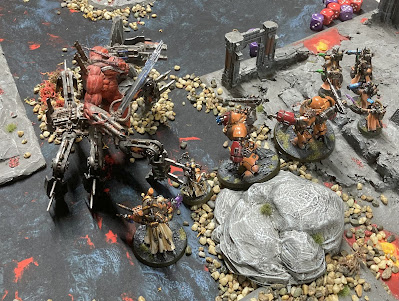 The big Daemon engine thing, fuelled by Khorne, decided the robots were the most worthy challenge, and charged into them, destroying another. Elsewhere the Chaos forces tried to hide their cultists from my longer range guns that were now in position - especially after the Havocs failed again to do any serious damage to the Kataphrons. 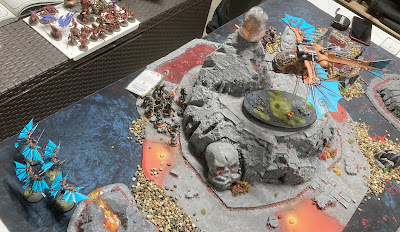 Operation kill cultists! The Sterylizors dropped into a corner while the Fusilave had it's machine spirit boosted to act on it's top profile to fly over and add it's firepower - nuking the Havocs as it flew over them. Between the flamers and the stubbers that unit of Cultists was wiped out. 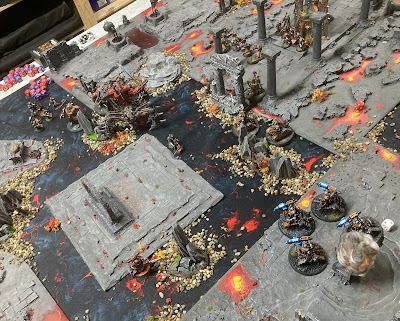 The Destroyers burned the unholy altar to ensure it would not be used again, while my slowly advancing forced took out the last of the Havocs and removed the Soul Grinder. With the sneaky Pteraxii move the Chaos forces were definitely on the back foot, but they still had three of the six summoning points to use in the last turn. 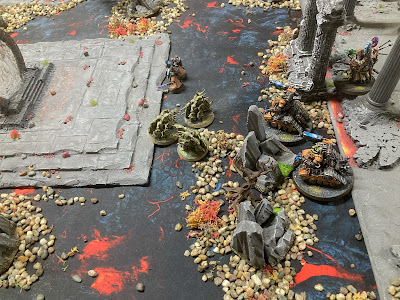 A little unit of Nurglings popped out of the portal to harass my Breachers. 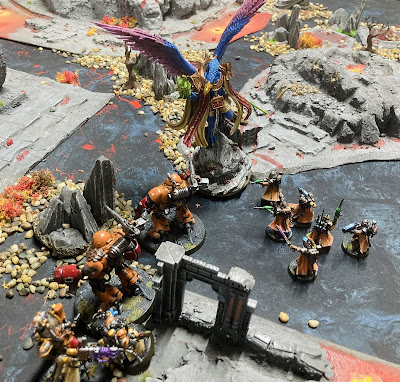 And a Daemon Prince of Tzeentch arrived to protect the altar and cause some mayhem. It killed several Skitarii and put a body in the way of the robots, while the Chaos Marine Prince and his remaining cultists hid behind a big rock. 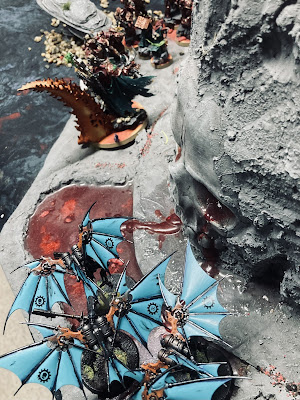 However that rock wasn't big enough as the Pteraxii got a 6 inch advance, getting one of the flamers in to torch some cultists, with the assistance of some shooting from the Kastelans. The robots then charged in and punched down the Tzeentch prince to control the altar. At the end of turn five the AdMech had destroyed or controlled five of the summoning points, leaving just the warlord of the Chaos Marines remaining to flee and plan his revenge!
Adeptus Mechanicus Victory!
Well that was an awesome game! It looked amazing to start with, and I really enjoyed the whole random summoning element (it reminded me of a SorcererDave battle report we did a while back). I also think, in spite of the AdMech's overwhelming firepower, it was quite close and a pretty well balanced scenario - without the mobility of the Pteraxii and flyer I'd have really struggled to get at the cultists. The flappy boys were definitely the key units for me in this game!
In hindsight we thought that since it was narrative perhaps we should have given the Chaos Marines their extra wounds, I'm not sure it would have made that much difference in the result but it would have felt better and more impactful - most noticably the Terminators arriving, failing a charge, then getting taken off the board with small arms fire for the most part.
Still, it was a fun experience, and as mentioned, the Daemon Prince got away - that means there's scope for a rematch once the Chaos Marines get a new ancient grimoire of forbidden knowledge (Codex). Next time though the Mechanicus may call upon the holy Ordos of the Inquisition for assistance! I hope you enjoyed reading, and stay safe.
Posted by Redtoof at 16:50