Bit of a crazy one this time! Regular-opponent-John and Irregular-opponent-Jim both had 1750 lists they want to try out (a fair amount of which is still being finished) so they stuck them together against two seperate 1750 point armies of mine. So for this game those Alpha Legion are totally legit loyalists, honest!

John's Emperor's Children had a bunch of cultists, some steed riding characters, 2 Deredeo dreads, and a (currently green and black) Spartan loaded with 18 Noise Marines. Jim's army was aligned to Khorne, with a combination of Daemons and Marines - 3 Troops, 3 Daemon Princes and 2 Bloodthirsters!

My force was made up of a 1750 point Ryza/Taranis alliance, featuring 2 Priests, Vanguard, Breachers, 6 Destroyers, an Onager, 2 Warglaives and an Errant. Alongside them stood the proudly loyal Alpha Legion, with a Lord, 2 Sorcerers, Dark Apostle, 3 Cultist units, 3 Marine units in 2 Rhinos, Autocannon Havocs, Claw Terminators and 2 Predators. 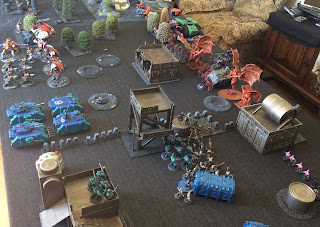 The set up. We decided to to long edges because on an 8x4 board short edges would just be silly. We also played that each 1750 point list had its own Warlord and Relic, and the mission was essentially 'classic' maelstrom, except expanded so that we held up to 6 cards each turn. With command points coming out of my ears I made use of Forward Operatives, dumping a big unit of Cultists by the daemons, shielding the Terminators and Dark Apos... I mean Chaplain. I won the roll off for first turn, but Jim seized with an Iron Warriors dice. 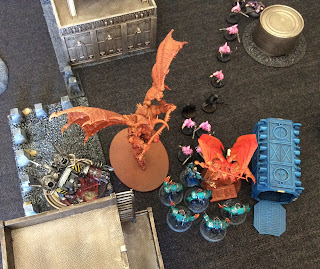 Predictably the Khorne units surged forward. A host of Daemons descended on the Terminators after shooting butchered most of the cultists. The Iron Warriors prince finished off the last of the cultists to allow the other Prince and the Bloodthirster to pile into and attack the Terminators. The Prince whiffed majorly and the Terminators interrupted to put some wounds on him, before the Bloodthirster turned them into paste. The Dark Apostle ended up surrounded by Daemons, but managed to do some damage with the Black Mace. (I mean Crozius Arcanum...)

Elsewhere not much of note. Some Spawn claimed an objective near an enormous pack of chicken (Chaos did it). John tried to focus fire on the Kataphron Destroyers but only managed to kill off 2. 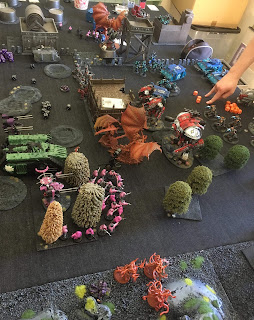 My turn to respond and the Knights march forward. Elsewhere some marines get out of their Rhinos to charge up their plasma guns in the direction of a Daemon. My wife turned up with a lovely cake and took this picture. Look it's my hand! Shooting was good in places, reducing the Bloodthirster by the Knight to a lower bracket and clearing his Bloodletter screen. I played the Plasma Specialist stratagem on the remaining Destroyers and supercharged their guns into one of the Deredeos, killing it comfortably along with one of the servitors. 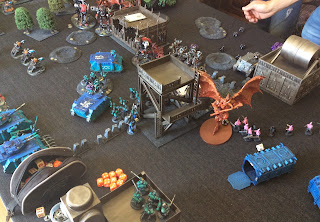 The 'Chaplain' killed the Prince with the help of a close range Daemon shell, but before he could explain himself the 'thirster chopped him down. My shooting on this side of the board was a bit more disappointing, failing to kill the Iron Warrior prince. 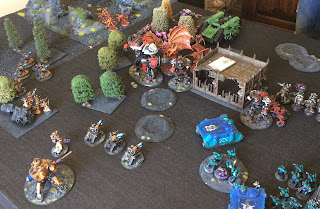 Tally Ho! The Knights of House Taranis go charging in. Camulus, riding the Errant, aimed to strike down the wounded Bloodthirster, but fails in his task. 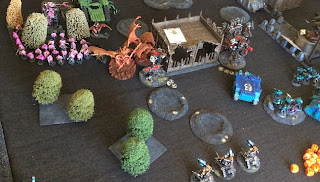 In reply the Bloodthirster cuts down the mighty warrior! I tried to play the Noble Sacrifice stratagem to cause a hilarious explosion, but fail to do so, even with a reroll. 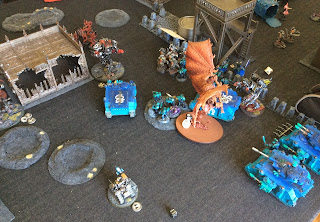 In John/Jim's turn the flying Daemons from the Terminator graveyard popped into the centre of the Alpha Legion force, trying to claim an objective by removing a squad of marines and the Rhino from it. Iron Warrior marines piled into another squad of Alpha Legionnaires. Elsewhere John's Emperor's children take a heavy toll on the forces of Ryza, reducing both units of servitors to one model and removing the Onager. 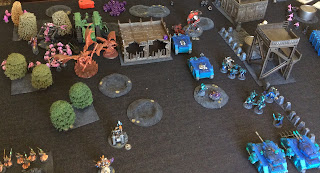 The Daemons find the Rhino tough to shift, and in my turn the Alpha Legion manage to clear the immediate threats, thanks to the psychic powers of the 'Librarians' and shooting from the heavy support units. However the Ad Mech force is very diminished, with only one Warglaive remaining, struggling to deal with a unit of Bloodletters. John's Emperor's Children still had a lot of shooting remaining... 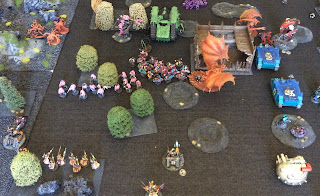 John and Jim's turn 3 saw the Noise Marines finally disembark and butcher the majority of the remaining Ad Mech. Fire from the remaining Deredo and the Spartan took out one of my Predators and they grabbed a few more objectives. The last remaining Daemon Prince went into the damaged Armiger but failed rather spectacularly to destroy it.

At the start of my turn 3 I had a smattering of under strength Marine squads, some assorted characters, the Havocs, Predator, Rhinos and a damaged Armiger that was about to be killed by the Prince. We counted up the cards and found John and Jim were already ahead of me, and controlling much of the board. As much as I'd have liked to fight to the bitter end I decided to concede to save time and get a third game in.

In my mind the Alpha Legion Lord looked over to the stricken remnants of the Ryza force, then at the Emperor's Children Lord, giving him a knowing wink, and ordering the remaining forces to fall back. All part of the plan...