So this is the final game from John's birthday weekend 40k-athon, this time a 'quick' 1500 point 2v2 game. In this one I teamed up with the wife (who also took some of the pictures - probably the good ones) against Jim and John. We played Deadlock (start with 6 objective cards, maximum drops by one each turn) with the quartered deployment zones.

Our list featured a Super Heavy Detachment with 2 Armiger Warglaives and a Knight Errant -Camulus the Warlord with Cunning Commander (+1 command point and bonus reroll) and the Armour of the Sainted Ion (2+ save). We also took a Battalion of Adepta Sororitas, including Saint Celestine (obviously), a Canoness with Eviscerator, 3 squads of 5 Battle Sisters (2 with storm bolter/heavy bolter, one with flamer/heavy flamer), a squad of 5 Dominions with all flamers, a Rhino and a flamer Immolator.

Jim took a Supreme Command detachment with 2 Bloodthirsters and a Khorne Herald. One of the 'thirsters was the Warlord with some kind of feel no pain ability and a 4+ invulnerable save - I'm not really familiar with the daemon rules at all. John took an Emperor's Children battalion of Lord and Sorcerer on Steeds, 2 units of Cultists and a big unit of Noise Marines loaded up with Sonic Weapons.

I was pretty scared of those 'thirsters getting at my Knights, and of the Noise Marines having free reign to blast the Sisters... 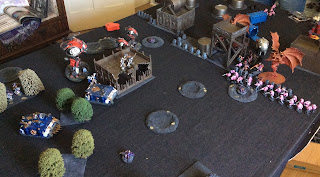 Deployment. Sisters are in cover or in tanks, Armigers holding the flank with Camulus free to go where required. The Chaos forces form a wedge with the Bloodthirsters ready to leap out and cause trouble. The Noise Marines are behind the tower ready to move into the area terrain behind the tank traps.

We rolled first turn, and the Chaos forces failed to seize the initiative. 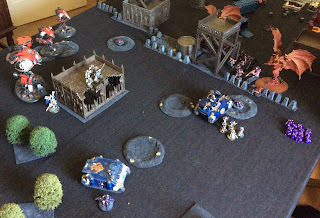 We got a reasonable draw of cards, requiring use to defend the objective far in our corner (a unit of sisters sat on it all game) and claim the objective that was by the cultists. Thanks to the Immolator/Dominions 'scout' move, they were able to get right up to the objective and burn the cultists off it. They prepared to sell their lives dearly. On the other flank the Armigers shuffled and Celestine waited for her moment to strike. My first Armiger fired at a Bloodthirster, causing the Warp Surge stratagem to be played. Camulus and the other Armiger then fired at the other Bloodthirster, taking a chunk of wounds off him. 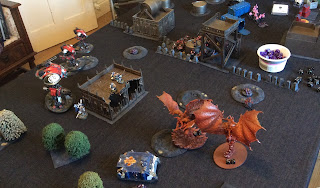 Unsurprisingly the Khorne Daemons make short work of the Dominions. Jim decided against sending either of them after the Knights as I had moved back far enough to make it a very difficult charge, instead opting for the insurance policy of overkilling the sisters. I got a bit of flak for this 'dishonourable' move, but it was the smart option and I was taking this game much more seriously than the previous one, as I obviously had to impress the wife!

On the Knight flank, the Noise Marines poured Prescience/Veterans of the Long War fire into one of the Armigers, dropping it down to two wounds under weight of dice. John and Jim debated long and hard about how to split the fire from the inevitable Endless Cacophony second round of shooting, eventually deciding to split between the two Armigers. Somewhat predictably I passed all my saves for the already injured one, leaving me with two to play with.

I think they got a point or two for the other squad of cultists running around by some objectives, but I think we were ahead, having defended an objective at the back. 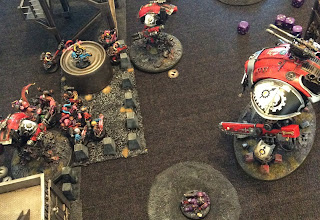 In our turn 2, we had some more reasonable cards, including Ascendancy and Hold the Line (love isn't always on time) but more importantly we had to deal with the key enemy units. The Knights moved up to the Noise Marines, firing from the hip at the Bloodthirsters. Both Armigers made it in on the charge, the injured one under the effects of Machine Spirit Resurgent to make the most of his chain cleaver. Camulus failed the charge however, which was disappointing for a number of reasons, one of which was that he wasn't quite in range of that objective denying us Ascendancy. 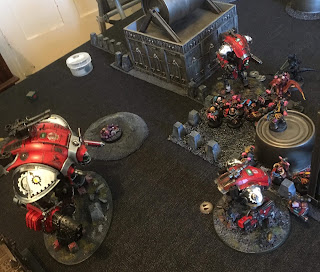 The Armigers took a chunk out of the Noise Marines, who in turn took out one of the Sisters squads while they died. This was extra annoying because they were the third unit in our deployment zone for Hold the Line. The Lord intervened, and between the two units they killed off one Armiger but left the badly damaged one alive. 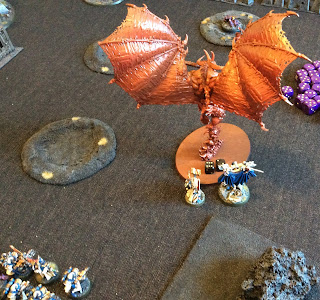 Elsewhere on the battlefield fire from the Knights and now disembarked Battle Sisters took out the warlord Bloodthirster, while Celestine and the Canoness moved up to take the other out in heroic combat. It was previously wounded from the Dominion's overwatch so Celestine fancied her chances. 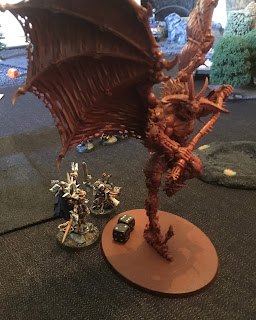 The sisters went in to the Bloodthirster, who was clearly disrespecting the Sisters by turning his back on them. Choppy stuff happened and the daemon was felled, but not before the monster interrupted and targeted Celestine, dropping her to one wound. 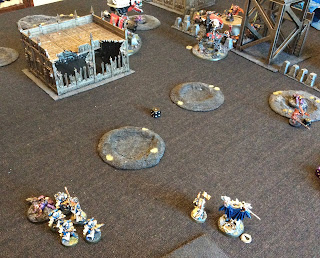 Daemons mostly cleared, but we missed out on 2D3 points from the cards. John and Jim didn't have many options to respond, but the Khorne herald avenged his greater brothers by charging and killing Celestine (for the first time) and the Noise Marines finally brought down the damaged Armiger. 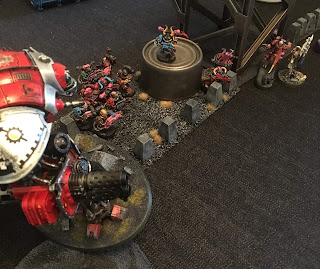 With most of the threat removed Our turn 3 consisted mostly of Camulus and the resurrected Celestine charging Emperor's Children. We also had a squad of Sisters use an act of faith to double move and advance onto an objective to try again at grabbing Ascendancy, while the Canoness finished off the last daemon. 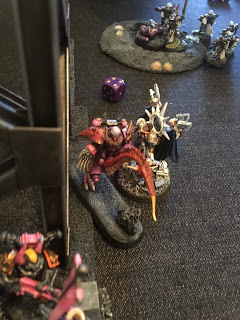 Celestine flew into the Lord, but failed to kill him and suffered serious wounds from the Lightning Claws in return. Camulus stomped on the Noise Marines, and followed up with a Thunderstomp Stratagem, reducing them significantly, and annoyingly killing off that Sister squad on the objective with their shots upon dying. 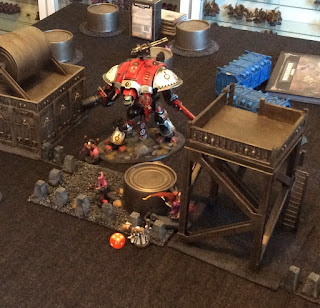 The last couple of turns featured the Lord killing Celestine (for real this time) and the Canoness and Camulus killing basically everything else, including atomising the Sorcerer with the Thermal Cannon and blasting cultists with carapace weapon that I consistently failed to remember the name of - now known as the 'hat gun'. Thanks to his 2+ save the Knight barely took any damage and at the end of the game he was facing down against a wounded Chaos Lord. I think we were ahead on objectives, but it mattered little because the Lord was about to receive a Reaper Chainsword to the face. John Conceded.

This felt like a fairly one sided game, but by the end John and Jim had picked up a respectable number of objectives and had killed off a lot of our force. We were left with the Errant, a Rhino and a squad of Sisters hiding at the back. I think we did well controlling the board and putting our units into favourable match ups - Knights vs Noise Marines and Sisters vs Daemons. It also has to be said that we were also largely lucky with our rolls. Our little group has given me the nickname 'Above Average Dan', I lived up to it this game and quite frankly the wife was even luckier. Clearly the Emperor/Omnissiah was with us against these dirty heretics!