Over the weekend I went to celebrate regular-opponent-John's birthday by beating him at 40k. We played a few games which will be presented as battle reports over my next few posts.

First up, while we waited for others to arrive, we played a small game of around 760 points. I had a superheavy detachment featuring my newly painted Armiger Warglaives and Camulus riding an Errant. He was rocking the warlord trait Cunning Commander and wore the Armour of the Sainted Ion. John took a Renegade Knight with Thermal Cannon and the fist, as well as an Outrider detachment made up of a Lord on a Steed of Slaanesh and 3 units of Chaos Spawn. I forget the mission but it was Maelstrom and largely irrelevant. 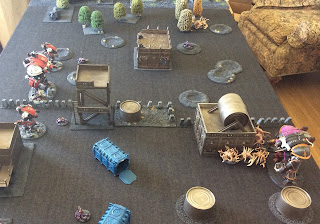 Deployment. John castled up behind a building with most of his force but kept a unit of spawn out on a flank to hold an objective. I deployed roughly centrally. John went first. He moved a bit with some spawn and blasted my rightmost Armiger with the Thermal Cannon, reducing it to just above it's lowest profile. 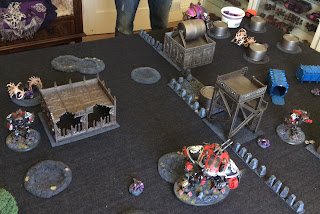 In my turn I shuffle Camulus and the damaged Armiger around to get firing lines and objectives. (That building the Knight is hiding behind proved surprisingly restrictive for the angle of my knight's approach.) The left Armiger advanced towards the spawn on the objective (I needed to capture it). Fire from it's melta weapons removed one of the spawn, while the rest of my shooting damaged the Renegade Knight. 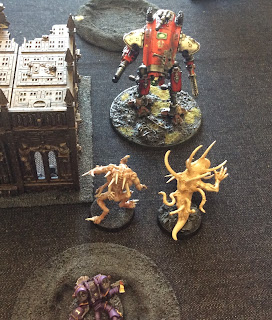 I paid 2 command points for Full Tilt, but failed a short-ish charge on the Spawn. In response John moved them out to gribble all over my lovely Armiger. 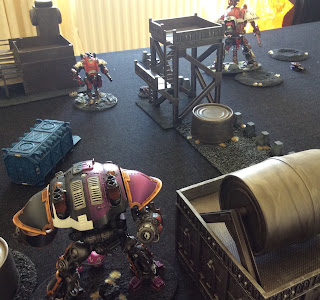 The Knight moved up and got the heavily damaged Armiger in it's sights. Incredibly the plucky little squire survived the blast of the Thermal Cannon! 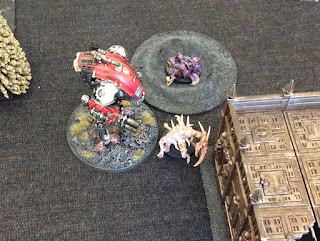 On the other side of the board the Spawn chipped the paint on the healthy Armiger and lost one of their number for their efforts. I consolidated closer to the objective. 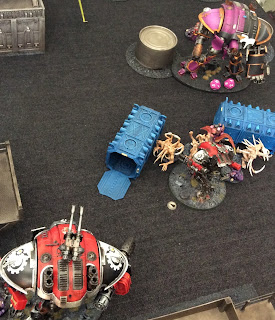 In my turn not much happened. I moved around a bit to hold objectives and took more wounds off the Renegade. I think I killed that one spawn in combat. In John's turn Spawn and the Lord jumped on the smoking Warglaive, while the Renegade switched targets to Camulus himself, with little effect. 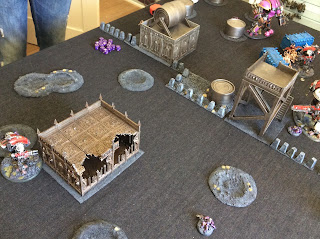 The Spawn tore a wound off the Armiger, before the Lord finished it off, but much to John's 'amusement' I played 'Our Darkest Hour' to have him stand back up with 2 wounds remaining. 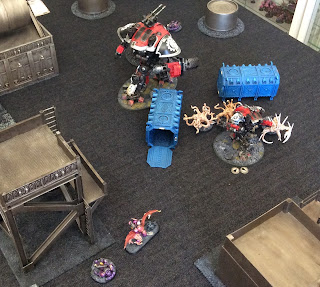 In my turn Camulus revved his chainsword and charged the traitor knight! A solid hit took down the corrupted war machine, releasing it's sacred machine spirit from it's torment. Elsewhere the Armiger on the flank shot some Spawn, while the Injured one stabbed some. 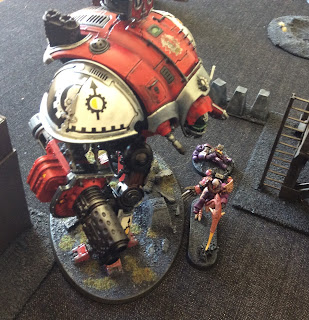 The wounded Warglaive eventually fell, but with the enemy Knight destroyed and most of the Spawn slain, Camulus was able to catch the Chaos Lord lurking by a fallen hero of the Imperium. Forgoing his ranged weapons, he charged into honourable combat, driving his mighty chain blade down through the body of the enemy warlord, making him very, very dead.

With that we called the game. I was ahead on victory points anyway, but John only had a couple of Spawn left and had no real way back. It was a bit of a silly list that John threw together on a whim, so perhaps not the best test of the mettle of House Taranis, but still it was nice for my first game with the new Knight Codex to end in a solid victory. Honour Thy Forge, Honour The Primus Ordinus!