The Fiery Fowlers’ First Foray onto the Field

Just came back from a fun week visiting friends and family in sun-soaked south Devon. During this time I managed to fit in a game of Blood Bowl at a lovely new games shop that has popped up since I last visited - Taylored Games in Kingsbridge. On the off chance that anyone reading this is in the area but hasn't already been in the shop, I thoroughly recommend it. Staff and customers were very friendly and welcoming (to humans and dogs) and they have a good range of nerd stuff.

So back to the Blood Bowl. The Fiery Fowlers (Sponsored by Nan Doe's Spicy Chicken) took to the field for a 'friendly' against an as yet unnamed Dark Elf team, coached by George. Given their current unbranded grey kit and their palid grey skin, I shall refer to them as the Injection Molded Marauders.

Apologies in advance for the extra poor camera work on this one. The goblin snapper had shaky hands. 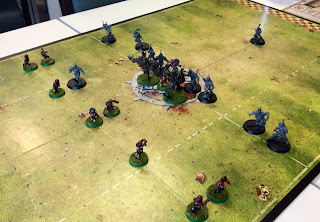 The Injection Molded Marauders received first and set up very aggressively, moving quickly up the flank. Flawless passing and pick ups got the ball moving quickly across the field. 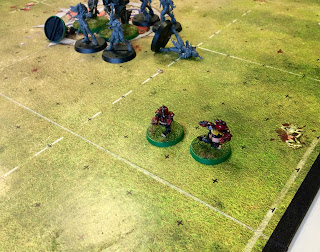 I think these two brave 'flings got the Fowler's first removal - KO-ing an elf trying to move up the other side. 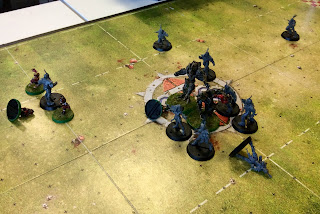 However this couldn't be replicated on the ball carrier, who managed to break free of the Halflings nibbling at his knees to run in the first Touchdown. 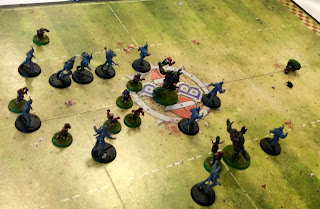 Upon receiving the ball the Fiery Fowlers tried to get the ball protected and moving up the field, but they were soon overwhelmed by the elf Marauders who quickly relocated almost entirely into the Halfling side of the pitch. Without the room to amble slowly up the field, the Fowlers got the ball carrier up to one of the mighty Treemen and flung him deep down towards the end zone. Sadly he landed on his head, which quickly led to another Dark Elf Touchdown. 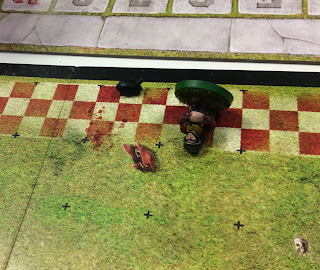 At the end of the first half the Fowlers had another go, and so nearly made it. I failed the Go For It roll into the end zone for the thrown Halfling having already used my reroll to dodge the ball carrier away from some elves. I then remembered the Halflings have dodge so I could have used that and saved the reroll. Oops. 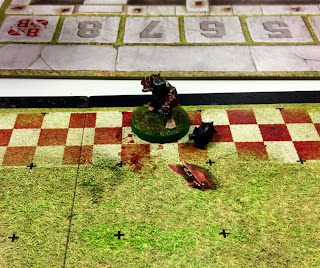 For the second half the goblin got distracted by the Halfling Chef and only took the one usable photo. The Fowlers finally got points on the board with a third thrown Halfling. This was followed up later in the half with a fourth and a second touchdown for the Fowlers, though the IMM scored another as well. I remembered the Dodge skill and made good use of it to move the 'flings around the place and out of the grasps of those naughty elves. George had his elves get all up in my little Halfling faces, causing several injuries, though one of the Trees punched back hard, grinding one of the Line-elves into the dirt.

In the last turns of the game the Elves broke into the Fowler half with the ball once more. A spirited defense put the runner under pressure and knocked the ball off the pitch, but the bounce was sadly not enough for the 'flings to recover and score, allowing the Dark Elves to pick up, blitz through the defenders and score again. The Final Score: 4-2 to the Injection Molded Marauders in both Touchdowns and Casualties. Handshakes all round, beer out of the chiller, chicken off the grill. A defeat, but a fighting one and all things considered not a bad start for the Fiery Fowlers!