Another Admech/Knights vs Chaos Battle Report. This one was played a little while ago so I'm a little fuzzy on the details. It was 1750 points against John's 'current' tournament list (since then it has changed dramatically several times), playing Tactical Gambit with the short edge deployment.

Deployment. I wedged my Destroyers behind a building and flanked with the Armigers, while John deployed mostly far back, with the Noise Marines in the Spartan. I kept the ranger unit at the back to cover a rear objective and protect against Tide of Traitors shinanigens. John got the first turn. 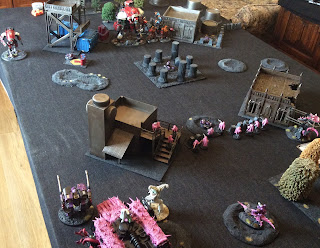 John kept his army back and his Noise Marines in their metal box. Some shuffling allowed targeting of an Armiger, which died. Some bonus firepower killed off the Vanguard. With a low gamble John took around 4 points with first blood. I realised I'd forgotten to use my Knight House trait (6+ FNP style save) and vowed to remember next time. 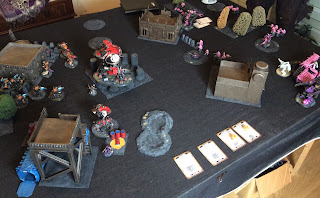 I gambled 2 and got the appropriate cards to get them. Knight and Robots moved up onto objectives, while the Destroyers had to slowly advance forward, being out of range of everything except cultists (which were mostly Phosphered to death). Armiger and Knight opened up on one of the Deredeos, aiming to reduce the firepower, while the Endless Fury split off to kill around 4 whole cultists. 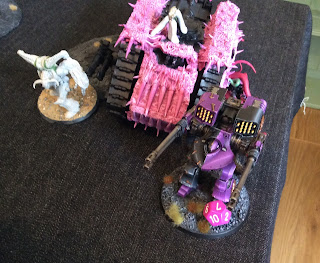 Look at this. 7 wounds taken. Poor rolling from the Knight this turn! At this point I wish I'd taken the Taranis Thermal Canon relic instead of the Endless Fury. I did pick up enough points to meet my gambit and level the score. 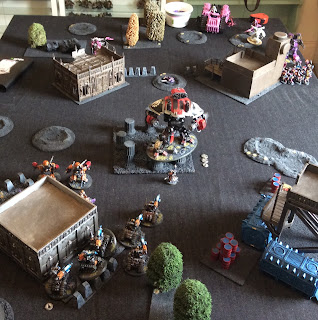 John's turn 2 and the Noise Marines got out. Spartan ran off to backline while a single remaining cultist ran over to take an objective. I think John gambled and achieved 1 objective. Shooting took out the last Armiger and put some significant damage on the Knight, though most of it came from lucky shooting from the Noise Marines. After the shooting I realised I'd forgotten my 6+ Taranis saves. Never again, I told myself! 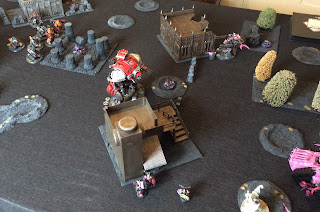 Due to decent table position I gambled for 3 objectives. Got an achievable draw with a requirement to kill a vehicle without it exploding, Hold the Line and Psychological Warfare. The characters wandered off backwards into the deployment zone while the Knight looked to secure the other parts by firing again everything at the Deredeo apart from the Endless Fury and the cultists it had previously failed to remove. I got 'lucky' and whiffed again with the gatling cannon, dropping the cultists enough to force a failed morale but not removing the unit. The anti tank shooting succeeded in taking the Deredeo down without it exploding. The Robots and Destroyers used the Elimination Volley stratagem to eliminate a truckload of Noise Marines. I think at this point I went into the lead on points. 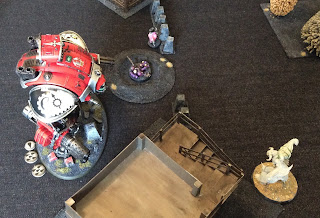 John's turn and it was 'focus the Knight' time. He got cards to claim the objective in front of the Knight, which was precariously being claimed by one remaining cultist. John also needed to kill a character - in this case the Crusader! 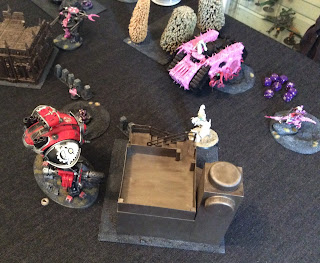 Heavy fire from John's whole force killed off the Knight, but of course I pulled out Our Darkest Hour and he climbed back up to his feet on one wound at the end of the phase. This forced the Deredeo to fire elsewhere, killing off a few servitors. Needing to remove the Knight this turn to claim his gambit, John charged the remaining Noise Marines in, who died to overwatch, then failed to kill it with their shooting upon death. He then charged the Prince in, who survived the overwatch... 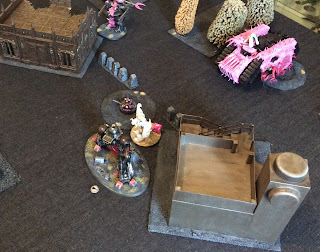 The Prince did enough to take him down! I played the Heroic Sacrifice stratagem to explode, killing that cultist and wounding the Prince. The Prince had just enough consolidation movement to stand on the objective and achieve John's gambit. As I removed my Knight I remembered that I had yet again forgotten my Taranis saves. Could have made a difference here, but wasn't to be. 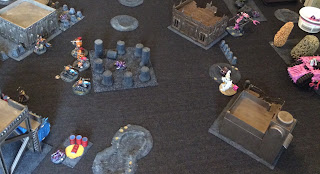 My Turn 3 and suddenly looking in a bit of a weak position. Not much left, though the characters and Rangers were pretty far back and relatively safe, and the Robots were still in Aegis Protocols and therefore should be tough to shift. 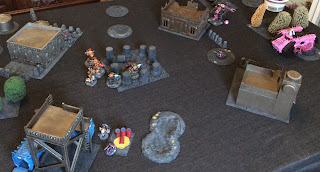 Some shuffling got the Enginseer to claim an objective and enough shots on the Daemon Prince to comfortably remove him. Still got a few points but most of the hard hitters had already gone.

Johns turn. I forget the objectives he had but the Spartan and Sorcerer started to move up. The Lascannons made the Robots go away, while the Deredeo did likewise with the Destroyers. Ouch. 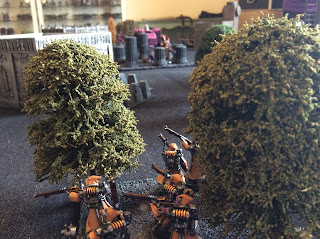 Moving into the later turns of the game, I was forced to gamble for 1 card, picking up a few points but giving some up as well. The warlord sacrificed himself to score the central objective, while the Rangers cowered, hoping for their objective to come up! 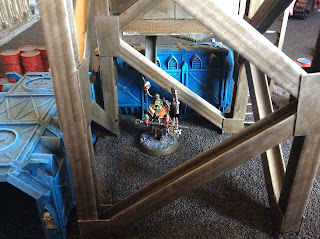 Newly painted Enginseer went into hide mode, trying to keep me from being tabled and hoping John didn't rack up a big score. 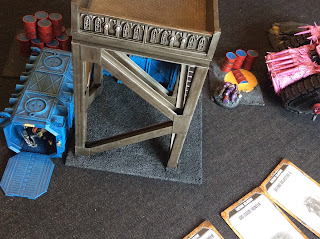 Another turn down the line and the Enginseer had resorted to examining this container. 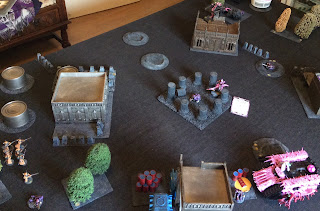 The game went deep, turn 7 coming up and the Rangers had a mad dash to try and stay out of LoS of something while maybe hurting the Sorcerer. 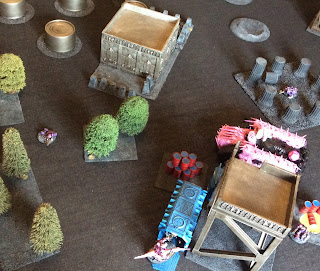 Sadly they didn't achieve either. The game ended after the Sorcerer made a long charge into the Enginseer, who survived the combat on 1 wound. In my last turn he withdrew from combat into the back of the container, where the steed wouldn't be able to reach. So I avoided the tabling, and picked up a solid 20 points. However thanks to some strong, unopposed late turns John had piled on a massive 32 points!

I think this was a game where we both thought the other's army was stronger. John was quite scared of the Destroyers, but the deep deployment effectively delayed their shooting and allowed John to focus other targets. I also think I got pretty unlucky with the Knight's rolls this game (and it didn't help that I forgot half of them). In the end I think these were the factors that enabled John to come out comfortably ahead.