Open War deck battle report number two. Tyranids against Chaos again, this time no Knights, but plenty of dreads. The cards decided we would play the Supply Cache objective, where there are 6 markers, at the start of a player's turn roll a dice for each, on a 6 that is the true objective, discard the others. The deployment was two arrow shaped zones on the short edges that meet in the middle of the board - deployment limits units to being 3 inches from enemies, so we could be very, very close for this one. The twist was Eager of the Fight - essentially increasing all move, advance and charge distances. This time John had the lower power level so he got a ruse - all his units that did not move would count as being in cover.

I set up pretty aggressively, with some Rippers and Termagants trailing back to hold the objectives. The Raveners, Hive Tyrant, some Rippers and both the Neurothropes were off the board, using two command points to put the 'thropes in tunnels underground. John had a token unit of cultists up front, standing on an objective, while the rest of his force stayed 'safe' further down the board.

I grabbed first turn, and of course I rolled a 6 on the first objective I rolled for, meaning the game was now a fight over a single objective at the back of my deployment zone, guarded by Ripper swarms hidden behind rocky hills. 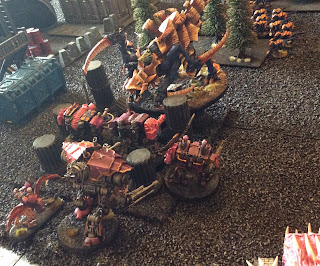 First order of business, the Termagants surrounded the cultists and made them super dead. More firepower from my force was largely ineffectual, but the Scythed Hierodule used the movement boost from the twist to speed up the board and charge all the Noise dreads. 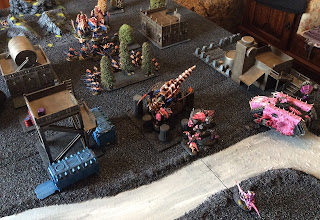 I was hoping to, using the attack twice stratagem, kill all three, but a bit of a whiff on the first round of attacks meant I only killed two and took a significant chunk of wounds from the fight back. Slightly disappointing, but I had given John something to think about, and would hopefully keep his force far away from the objective. 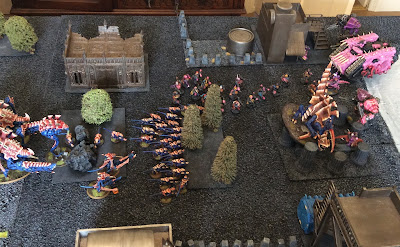 Noise Marines got out and moved up to clear out some chaff. Noise dread disengaged, allowing almost all of the Emperor's Children to open up on it. In the shooting phase the Hierodule took a battering, but kept standing. A few warriors fell, but the real damage was to come in the fight phase. The Noise Marines charged the Termagants, and I played the Caustic Blood stratagem to do mortal wounds on 6s when they die, which seemed worth it after the marines killed off 20 of them or so. 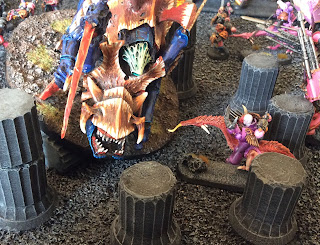 Elsewhere, the Lord charged the heavily wounded Hierodule, using Veterans of the Long War to wound easier. Using the Flames of Spite warlord trait, the big bug was killed off with mortal wounds (generated on a 5+ from veterans, after rerolling wounds from lightning claws - ouch.)

We now had a big line of Termagants and Noise Marines snaking down the middle of the board, and I was in danger of being pushed back completely into my own deployment zone. But not for long... 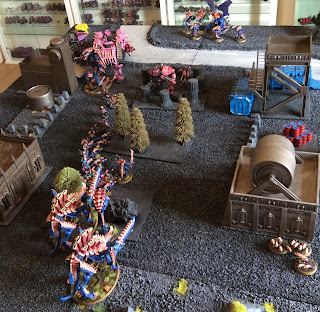 My turn 2 and the reserves arrived. Raveners dug up to bring both Neurothropes behind the Spartan, while the Tyrant dropped in next to them and the Mawloc popped up in a nice spot between the walking lord, the sorcerer, the Noise marines and the Spartan. Shooting was again fairly useless (apart from the Tyrant, who overkilled the remaining cultist squad, hiding in some cover on the far right corner), but the psychic powers put a lot of damage on the Spartan.

In melee, I opted to charge one of the Tyrannofexes into the Noise Marines to keep them tied up once they disposed of the Termagants. At this stage I didn't really want to kill them, as they would then be able to fire on several weakened or valuable units. The tactic worked, as marines aren't great at hurting toughness 8 monsters. 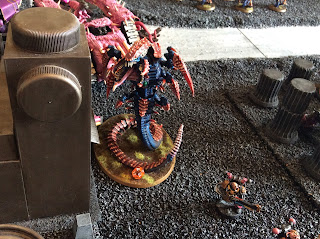 Elsewhere the Lord and Sorcerer decided to Heroically Intervene on the Mawloc, presumably to stop him slithering off and charging something more useful. He took a few wounds but in response targeted the Sorcerer, who he had already caused some mortal wounds to, and stuffed him into his big gob. Omnomnom! 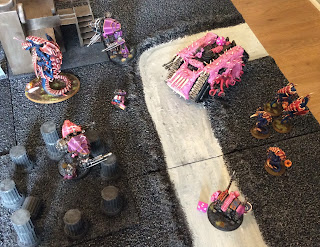 John was feeling somewhat defeated at this point, but I reminded him about the speed boost twist and the massive movement potential of the Chaos Lord on steed of Slaanesh. The Lord covered approximately half the battlefield in one go, leaving several units behind to deal with my intrusion. The Tyrant fell to shooting, while the Raveners too serious damage. John charged the rest with almost everything, including the Spartan and the Lord on foot. Hilariously the one surviving Ravener managed to kill off the Lord, presumably emulating his big Mawloc brother. 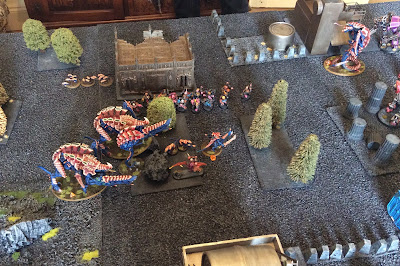 The Lord on Steed fared better, charging forward, killing off a bunch of Termagants, Rippers and Warriors before eventually slaying one of the Tyrannofexes. This was a problem because the objective was currently only guarded by 3 Ripper swarms and the Lord could easily reach them in a turn of movement. 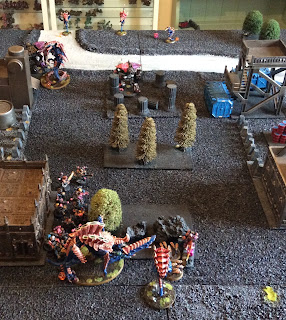 Over the next couple of turns I cleared most of John's back field, killing off the Spartan with psychic powers (first time I'd killed it - I may have prioritised this over securing the objective a bit too much) while the Tyrannofex continued to keep the Noise Marines occupied. 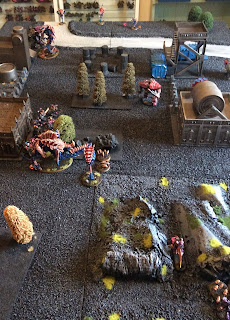 Eventually the Lord made his move, zipping away from melee with my remaining chaff units to get within striking distance of the objective. Note that John had last turn, so I wouldn't be able to respond to his last move. One of the Decimators also managed to move quickly down the board to become relevant. I had to make some desperate charges with Ripper Swarms and the Malanthrope to try and drag him down. 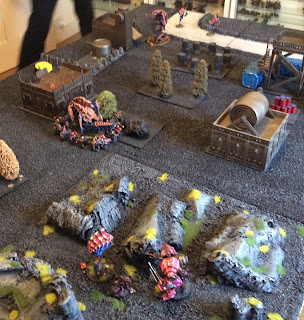 Finally the Lord fell to the hyper-toxic Malanthrope, after killing all the Rippers. John made a bit of a mistake by withdrawing from melee with the Noise Marines in order to get some overwatch, but this allowed me to shoot the Decimator on my last turn, finally getting a good round of fire from on of the gun beasts, reducing it to a single wound. 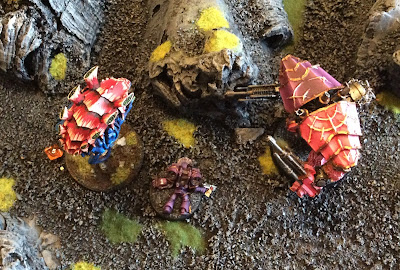 In John's last turn the Decimator moved up onto the objective and opened fire on the Malanthrope. Thanks to the -1 to hit the floaty gas bag survived. As the last move of the game John debated charging in to try and finish him off, but with no melee weapon and only 2 wounds left on the Decimator (it regenerated one), he decided there would be a good chance the Malanthrope would have killed him and won me the game. In the end the Decimator held back the charge in order to draw the game.

So, second game in a row the Malanthrope has been left holding the critical objective at the end. This time only for a draw, but I'll take it. I think we both made some rather foolish, sleep deprived tactical blunders, so this is probably a fair result. John's Lord is an absolute beast, but in the end he's still a squishy lump of biomass in a tin, and now he's being digested by the Malanthrope. I was pleased with my 'deep strike' Neurothrope tactic to get some tasty Smite targets. I've been playing around with some different alternative uses of the tunnelling stratagem, and I think this one seems like a winner. Neurothropes are such a pain to get rid of plus are very reliable Smiters. One of them had Psychic Scream as well, so I was getting a fairly reliable 3D3 mortal wounds out of them. On top of all that, the Mawloc did his job superbly, and easting the Sorcerer was just a hilarious extra bonus.

Another fun and surprisingly close game with the Open War deck. So far, so good, I suspect we will play a few more games in the near future.