In some kind of preparation for Double Trouble 4, John and I played a couple of little 875 point games. I took the Alpha Legion list I'm taking to DT4, while John used two of the options he was considering. In case you don't fancy clicking a link, my list is 2 Chaos Lords, 30 Cultists, 3 5 man Chaos Marine squads with assorted special weapons, 2 Rhinos and a Heldrake. This list is designed primarily around taking units I like/look cool, and secondly around mobility and the ability to take objectives. It's designed to be the 'support' half of a list that has a good chance of being paired up with Imperial Knights.

We played an Open War mission that basically boiled down to 'kill stuff'. 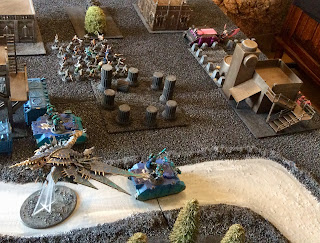 During deployment John hid his Noise Marines in transports (Dreadclaw off the board), while the cultists hid behind a building. I deployed my Marines in the Rhinos along with the Heldrake on the line of the deployment zone. Even though John was going first I spent two command points to pop the Cultists and the Powerfist Lord down, pretty much in the middle of the board. They were the bait to lure the Noise Marines out of their boxes. 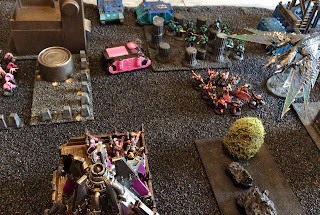 The plan 'worked' in that the the Noise Marines all turned up/got out and killed all the cultists. Sadly John was smart and split the Blastmaster off to fire at the Heldrake, dropping him down to only a few wounds. The Noise Marines from the Rhino and the Lord charged my Lord out in the open (and the Cultist champion who probably wishes he died to the sonic weapons) and killed him easily. 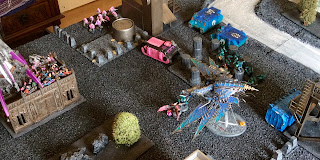 Now that blob of Noise Marines was out in the open, the trap was sprung! The Marines all got out of the Rhinos, along with the second Lord (now the Warlord - I am Alpharius!) and levelled their guns at the Emperor's Children. The Drake regenerated a wound, putting it on the middle profile. The first plan was to go for the second Noise Marine squad with both it's shooting and melee, but thanks to the damage it had already taken it couldn't fly that fast. It's Baleflamer went into them but did nothing. The Marines shooting all but killed the Noise Marines for minimal losses from their return fire (the Heldrake was reduced to 1 wound...) I really wanted to tie up or kill that Lord, so had to charge a squad of Marines into him. One survived to keep him busy while putting 2 wounds on the Lord. This turn kind of worked, but I had to sacrifice a good chunk of my army and really needed to either kill the Lord or do some more damage to the second Noise Marine squad. 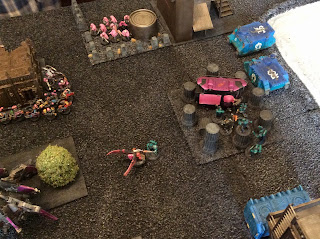 In John's turn there was some movement, then the Heldrake died to the Warpsmith's curse. Other shooting reduced one of my 5 man squads to just the champion with a combi-plasma. With only the Rhino in range to charge, we had some stunt driving... 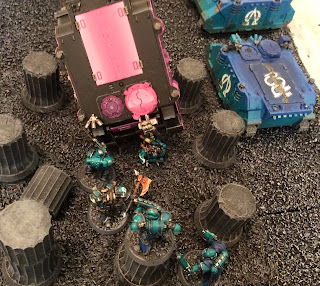 6s to hit, a wound and then a failed save! The Champion falls to a Rhino to the face!

Elsewhere the Lord made very short work of the power sword Champion. 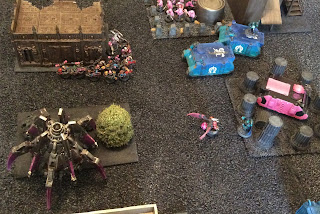 My turn, the remaining Marine squad jumped out of combat and back into their Rhino. (We had a look and couldn't see anything in the rules that forbids this - let us know if this isn't allowed for some reason.) My remaining Lord revved his relic weapon - the Blade of the Hydra, and headed over to face his opposite number. I didn't have much on the board, but John didn't have much anti-tank (his blastmasters were in the unit that died). I figured if the Lord could kill John's Lord and the Rhinos could do some damage to the cultists with their combi-bolters I might still be in the game.

Sadly, the Rhinos killed approximately 1 cultist. They then charged the Noise Marines and the Cultists to tie them up and took minimal damage. The Lord charged, hitting and wounding enough to force about 5 saves. John passed all of them. 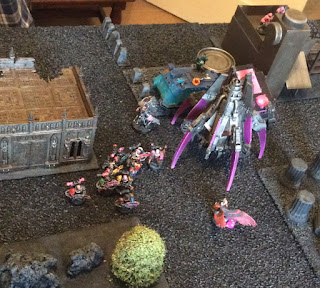 With that it became a mopping up job. My Lord fell, and the Slaaneshi Lord charged in to kill off one of the Rhinos. The Warpsmith and Dreadclaw put damage on the other. I pretty much conceded at this point, via getting my last guys out and shooting/charging the Noise marines.

A solid win for John, but I think it was a fair showing for my force. It wasn't really a mission to their liking, but, for a little luck, they were holding their own in a fight.

Technically this game had 3 objectives, but they were largely irrelevant. I decided early on I wasn't going to play the 'castle up at the back and rush objectives on  turn 5' game that I might just win, but that would be really boring. Instead I resolved to see how much damage I could do. I also picked up a Ruse from the Open War deck - Revenge. If my warlord(s) died, I would get +1 to all wound rolls for everything. Again I used two command points to pop the Cultists right up front along with a Lord. The Knights moved a bit, then it was my turn. The Heldrake moved up to support and the Rhinos shuffled in behind. Unwisely, I spent 3 command points to use Veterans of the Long War and then Endless Cacophony on the cultists, just to see how much damage it would do to a Knight. Turns out, not very much - they took about 5 wounds off it. 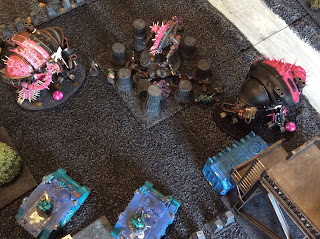 In response the Knights went stomp stomp stomp! Many, many cultists died, and on of them managed to tear the Drake out of the skies with it's Reaper chainsword. I spent two command points to keep the few remaining cultists around and disengaged them to surround the Armiger - hoping to hold it up long enough to give me chance to kill one of the Knights. I also charged my Lords into the Knights, aiming to do a few wounds before they sacrificed themselves to buff my army (which they successfully did). 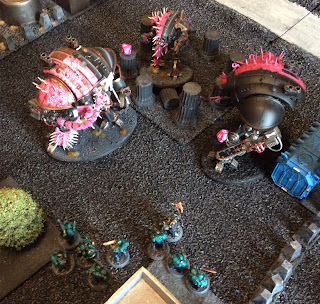 The Renegade Knight response - move forward, kill stuff. The Warlord Knight and Armiger finished off the cultists, after shooting damage reduced one of the Rhinos to a single wound. The other Knight charged the fully intact Rhino, crushed it with his fist, picked it up, and threw it at the other one, which promptly exploded. Between emergency disembarking and explosions I was down to 9 marines. Those marines decided to try and make a name for themselves, moving in to fire at the most wounded Knight, then eventually charge it. They reduced it down to about 3 wounds, but eventually (predictably) all fell.

A very strong win for the Renegade Knights. John's force is looking good for potentially winning the Genocidal Maniac award at DT4 for killing the most stuff. I'm still fairly happy with my guys however. They may not have performed in these games but I'm expecting they are most likely to play alongside a more killy force, like John's, where I think they will shine in more of a support role. That's the plan anyway. Let the allies do the killing and be killed, while the Alpha Legion are free to pursue their own agenda...