Another Open War battle between the Alpha Legion and the Emperor's Children at 2000 points. (I promise I'll play something else again soon - just after DT4...)

For this one we drew a mission that rewarded points equal to the power level of destroyed units, but there were double points on offer for vehicles, monsters and characters. I think it was called Gloryseekers or something. Our twist was Acid Rain - in the first turn of the game everything would be at -1 to hit and -1 movement, after then we would roll off at the start of the turn to see if the rain went away or came back - though after turn two we completely forgot to roll for it. Regular-opponent John got the ruse, Revenge! - If I killed his warlord the rest of his army would get +1 to wound on everything. The deployment was... hard to describe. It's show below. John set up on the edge and I got the 'shaft' deployment zone. 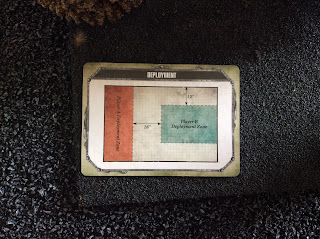 My list consisted of a Battalion and a Spearhead. For convenience everything was marked with Slaanesh.
HQ: Chaos Lord with Powerfist, Warlord Trait: I am Alpharius. Chaos Lord with the Blade of the Hydra. Sorcerer in Terminator Armour with Death Hex and Prescience.
Troops: 30 Cultists with autoguns. 5 Marines with a melta. 5 Marines with a melta. 5 Marines with a plasma and combi-plasma.
Elites: 6 Terminators, 5 combi plasmas, reaper autocannon, chainfist, lightning claw, 4 power axes.
Heavy Support: Predator with all lascannons. Predator with lascannons and autocannon. 5 Havocs with 4 autocannons. 5 Havocs with 2 missile launchers and 2 heavy bolters.
Transports: Rhino. Rhino.
Flyers: Heldrake with baleflamer. 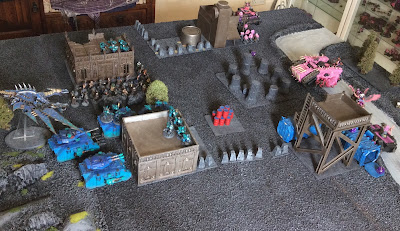 Set up for first turn. John won the dice roll and the Emperor's Children began the advance. Plasma Havocs (and a squad of cultists) were in the Rhinos, while the melta Havocs and the Warpsmith were in the Dreadclaw up in orbit. My Terminators and Sorcerer were waiting in the Teleportarium. 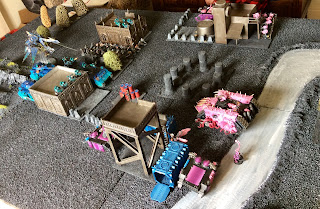 Rhinos moved up the flanks and fired their smoke launchers while the Spartan lined up shots on one of the Predators. The acid rain proved tricky and the 8 lascannon shots managed to only get one wound, though it did do 6 damage. 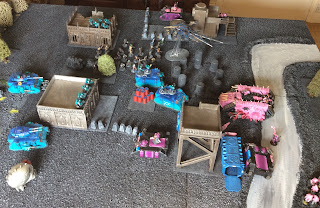 In my turn one I moved up the Rhinos with the marines in and also launched smoke. The cultists attempted to advance to restrict a Rhino's movement but rolled poorly. The Drake zoomed up to be annoying and threaten something useful next turn. Fire from the Predators and the Havocs slammed into the Spartan - I realised that double that thing's power level is a very big number. Combined fire managed to drop it down to 10 wounds, into it's degraded profile. 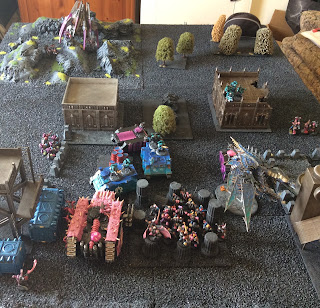 The acid rain eased off, and from out of the clouds came the thundering drop pod, slamming into the hills behind my Predators. All the Havocs and Noise Marines got out of their transports and opened fire! The shooting phase was brutal, but for some very poor rolls, could have been much worse. Both Predators took multiple meltaguns and lascannons before eventually succumbing to the Blastmasters on the Noise Marines. My autocannon Havocs got vapourised by plasma, though the other team survived with only the loss of their champion. The cultists, as is tradition, all got sonic blaster'd to death. Finally John's tanks all made charges on my vehicles to reduce their movement options and, for the Heldrake, stop it charging. A devastating turn, but I was lucky not to lose at least the second Havoc squad or the Heldrake. It looked like all was lost for the Alpha Legion, but just as the mythical Hydra, cut off one head and two more shall take it's place... 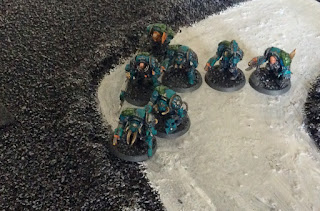 Reinforcements arrive! The Terminators and the Sorcerer dropped in behind enemy lines, looking to strike a killing blow. 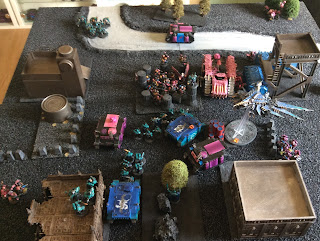 John had screened his back lines well, meaning the Terminators were not in rapid fire range of anything worth targeting. All the marines piled out and picked their targets. John's two plasma Havoc squads got attacked by the plasma marines and the Heldrake, while meltaguns went into the Spartan. One hit and wounded (thanks to a command point) and took 6 damage off the beast. The lord then followed up with a Daemon shell, taking off another two wounds. With two remaining, the Terminators split their fire, killing a few of the Noise Marines while finally destroying the Spartan. 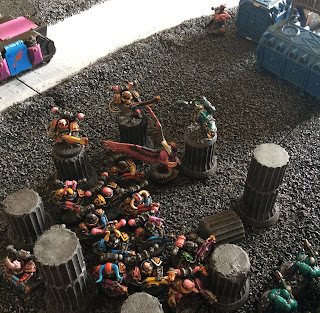 Knowing the damage he can do (but forgetting the ruse card) I charged my powerfist lord into his opposing number. Thanks to some good invulnerable saves, both survived. I also charged two chaos marine squads into the Noise Marines, losing most of a unit to overwatch, but eventually holding them up. 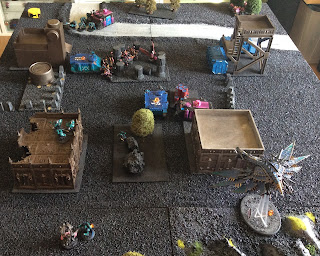 With most of his hard hitting units dead or in combat, John set about trying to get his remaining assets in position. The melta Havocs got back into the Dreadclaw and zoomed over to my remaining Havocs. The Sorcerer charged into my fist Lord, planning to finish him off (he was on 1 wound) and hide from the Heldrake. Meanwhile a pair of Rhinos charged the Terminators to keep them busy. The Sorcerer struck, but I passed my save, and spent the command points to interrupt and punch him in the face. The Lord died shortly after, but hey, guess what? He wasn't the real Alpharius!

In my turn the Havocs/remaining marines got lucky and kill off the Dreadclaw in one volley, allowing the Heldrake to incinerate some of the occupants. My new warlord charged in and finished them off. The Terminators polished off one of the Rhinos while one of my Rhinos charged into the Noise Marines to tie them up, surviving the overwatch and melee attacks on 1 wound. 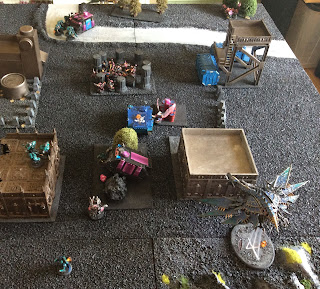 John took his next turn and killed the 1 wound Rhino, but not much else. With the Noise Marines in the sights of the Terminators my Sorcerer smote the Rhino with warp energy, destroying it and freeing the Tactical Dreadnought equipped veterans to target the Noise Marines. With that, John conceded, and the Emperor's Children retreated. Slaanesh (and the dice) were not in their favour.

All things considered, a good game. The Terminators were appropriately scary, and the Heldrake killed lots of stuff for once. The missile launchers definitely pull their weight as well. I definitely got lucky, but perhaps that was just the favour of the Dark Gods?