I recently took on a little project for the exceptionally busy Winters SEO to paint up some terrain for him and his channel. Winters asked for assistance on Patreon and I, among several others, took up the challenge. I accepted, partially because it's cool seeing stuff you painted turn up on the internet, partially because I felt a bit guilty about certain events during our battle report, but mostly because the terrain looks really cool and I fancied a go at it! 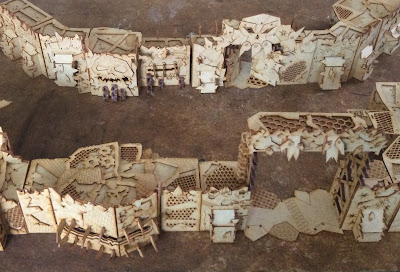 The scenery in question is a series of wall sections from Kromlech's Tabletop Scenics Orkenburg range. It's laser cut MDF sheets that, thankfully, Winters stuck together before posting, so it arrived as pictured above. There are loads of little wall sections that are all modular, having textured doors or barricades on each end so that they can be placed freestanding or as part of a larger fortification. 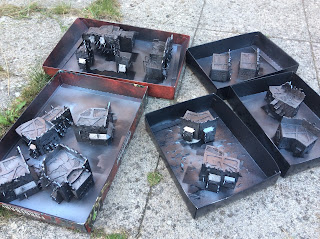 First step was to spray all the bits. A note to anyone trying this at home. Untreated MDF soaks up loads of paint. You'll either need to coat it in PVA glue or some kind of sealant first, or just be super aggressive with the spray paint to get any sort of coverage. Of course in true Orky fashion I just used an entire can of cheap spray paint getting them (and my fingers) black. The internet tells me that this is less of a problem if you use higher quality spray paint. In any case, after the first coat the rest of the painting was easy enough, just like painting undercoated plastic or metal. After the black I gave them all a blast of a dark metallic spray to get the base colour. 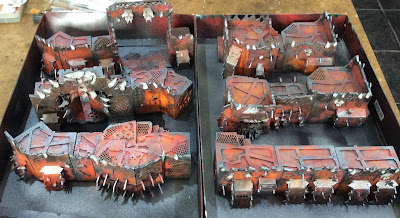 A whole lot of messily slapping on reds and oranges and a bit of white, followed by dry brushing with various metals, and this is the result. A dirty, rusty wall of scrap metal. I did attempt some coloured plates in among the rust and bare metal, but I didn't really think it was working out so I just made it all metal apart from the white for the skull symbols and 'tooth' spikes. I'm pretty pleased with how it turned out, and hopefully it'll look cool on the battlefield. Obviously though I had to set it up somewhere to see it 'all together'. 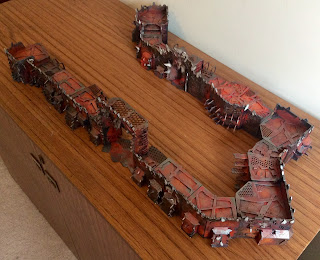 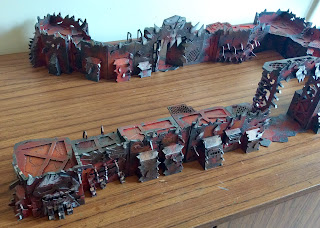 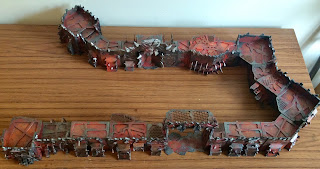 I built it up as a two staged defensive wall, imagining a larger fortress lay just behind the gate in the second line. One side was left open to allow access for larger war machines, while the other side was walled off. Seeing it all placed out on a table is pretty cool, but there was something missing... 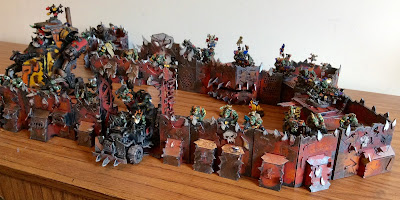 Yes, that's better! I couldn't help myself from populating it with my Orks before I packaged it back up for it's trip home. Maybe one day they will be reunited and I'll command the Orks on a Winters SEO battle report?

Given that I've named myself and this blog after my Ork Warboss, I've been somewhat neglecting them while waiting for the (now imminent) Codex. They have not really been seen on the blog, apart from the Gorkanaut. So as a special treat (mainly for myself), here are a load more pictures of Orks on a wall! 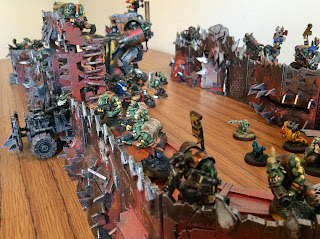 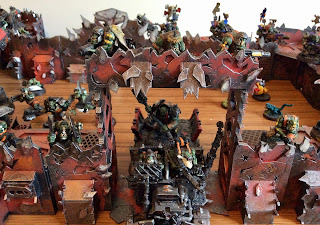 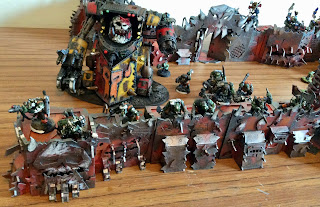 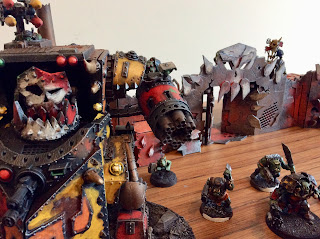 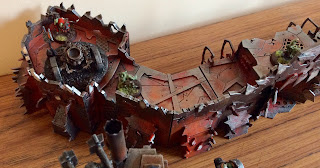 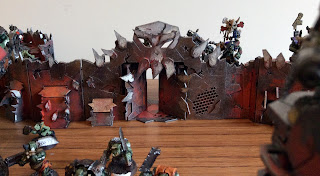 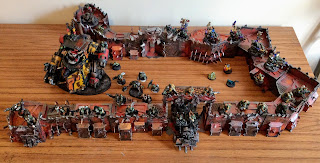