Hello!
After a bit of a break, I've been on another Narrative Wargamer Podcast, this time about another White Dwarf series - Flashpoint Charadon. This seems to be a cool little series with a bunch of different sets of Theatre of War rules each with a series of battlefield rules and some Crusade content for if you win games in them. Narratively they take place in the Charadon Sector, representing worlds and areas not covered in the main GW supplements, but there's no reason you can't use them to spice up pretty much any game. 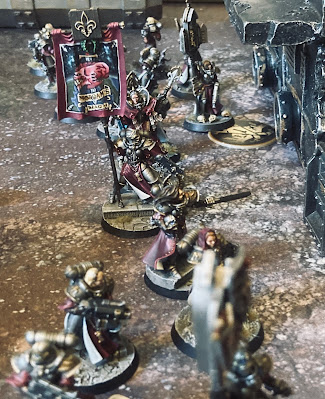 Using a picture here of SorcererDave's Sisters because as I mention in the community spotlight section, he has been using some of these Theatres of War in his recent 'solohammer' battle reports. While they aren't as much fun as having a real opponent there for the banter it's still good to stick on for a few hours of painting.
As usual, this post is pretty much just a 'I did a thing' post for completeness, so I've not got much more to say, other than I hope you enjoy listening to the podcast and stay safe.
Posted by Redtoof at 15:53