Hello!
It's been quite a while since the Titans walked. Last game I played was the battle for Gate 7, back at the start of 2020. So, it's time to return there, to play against The Claw and Legio Magna once more. (Aside - he's now running an Infinity battle report channel called Fast Panda Gaming if that's your bag.) As you can see, Magna struck back hard, downing the Legio Mortis Warlord left to guard the rebuilt Gate 7 to the Proditor Manufactorum, so now Mortis have sent out a Lupercal Light Maniple to sally forth and eliminate the threat. 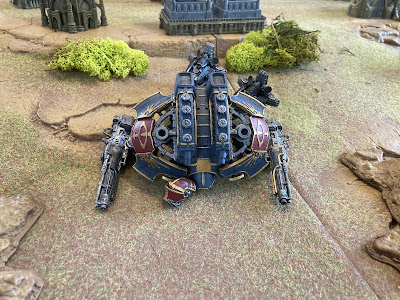 Yeah, The Claw got a Mortis Warlord off eBay and used it to decorate the board. Rude! Anyway, being 'new' to the game once again, we stayed at about 1000 points, and to keep it simple we didn't take any stratagems and used a couple of the standard objective cards. Since this time attacker and defender were reversed we flipped so I was going for Hold the Line, and The Claw was working to Engage and Destroy. 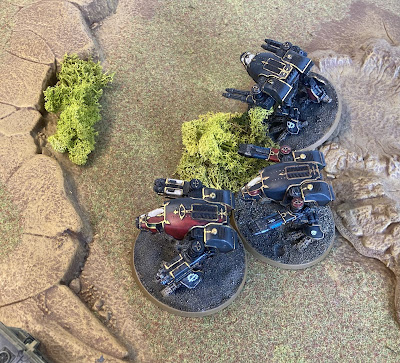 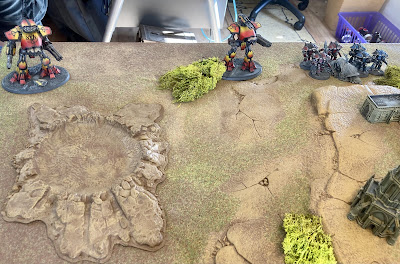 Having completed some new Warhounds earlier in the year I thought I'd give the whole pack a go and run the Lupercal Light Maniple, four of them, each with a pair of weapons. The Claw brought along a pair of Reavers with assorted guns, and a big blob of Knights. 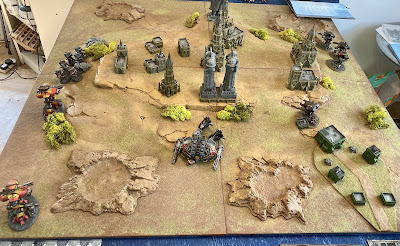 Deployment - most of my force was placed to pounce on the knights in the built up central region, while one of my titans ended up on the left flank in the firing line of two Reavers. Ooops! 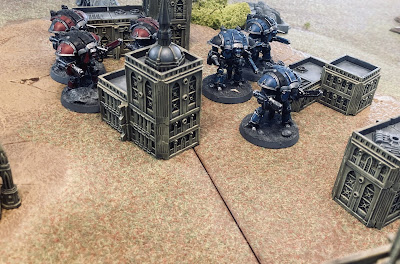 First up the Knights moved up through the city, while the hound on it's own got lit up from the opening volley. Shields fell, and a whole load of critical damage was taken, but it just about held on. 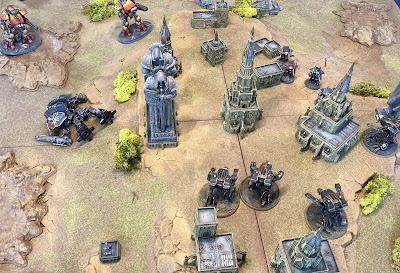 Moving into cover behind the statues, the limping Warhound joined up with it's pack mates to go for the Knights, who took some serious casualties. 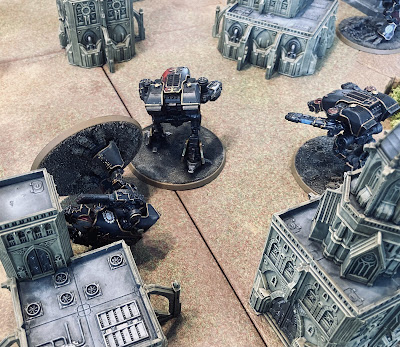 Sadly for me, the cover and merged shields weren't enough to keep the Titan alive long enough to use those Inferno guns. Engine kill! To add insult it staggered into the mega bolter hound to cause some bonus damage. It's brothers did however finish off the Knights in time to turn towards the Reavers. 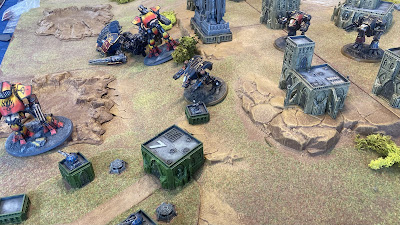 However, the big boys had already marched up the field, looking to break the line. This meant there was very little cover for my pack, who would have to engage front on in order to Hold the Line. 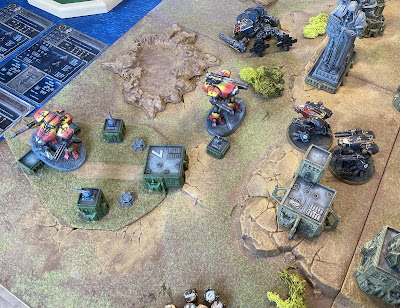 With the shields stripped trying to protect the first targeted Warhound, the second, with the plasma guns, got blasted, then exploded! 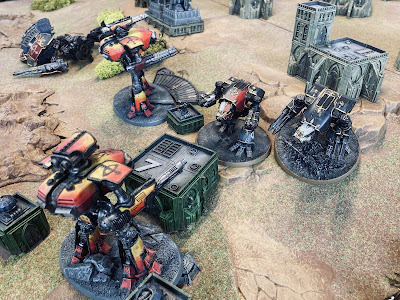 With time running out the last two hounds hit the accelerators to get out of the firing arc of one Reaver and focus fire on the other. The shields did go down but there wasn't enough gun to do any real damage. 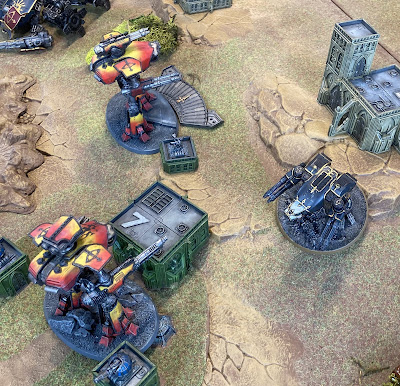 The third Warhound fell from the return barrage, leaving only the Princeps Senioris to slink off and concede defeat to the superior firepower of the Magna titans (and their now deceased Knightly house allies).
Brutal game, and the Gate is returned to it's original occupiers. I think so far in our games it's gone mostly in my favour and I've ridden my luck a few times, so it's about time for Legio Magna to get the win. Even though it was a fairly one sided game, it was still a lot of fun and a good way to re-learn the game again - it also took a lot longer than we had thought! Even with a lot of firepower going into my weaker titans, they still hung around for a good while, but I think I needed to give up on my crippled titans a bit, rather than putting my others in bad positions just to merge shields.
Anyway, hope you liked this quick report, with any luck the next one won't be 18 months away, so watch this space - and stay safe out there!
Posted by Redtoof at 21:04