Hello!
Recently I took a trip to Warhammer World, which is always fun, to play a couple of games against Dave and his Necrons. My AdMech had previously faced off against the xenos and been victorious, but this time a newer and more sinister force had awoken, led by the Silent King himself! Though it wasn't just the Necrons who had been upgraded - the forced of Ryza had acquired several new units since then as well. 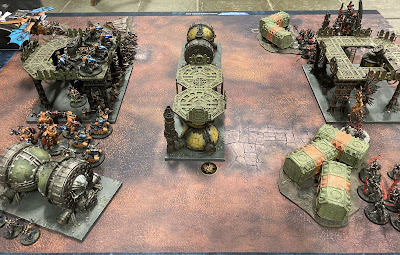 For the first game we played a matched play mission from the GT pack, Battle Lines - four objectives in a cross formation, short edge deployment. I took the secondaries Engage on All Fronts, No Prisoners and the mission specific Vital Ground. Dave picked Grind Them Down, Behind Enemy Lines and Retrieve Octarius Data. 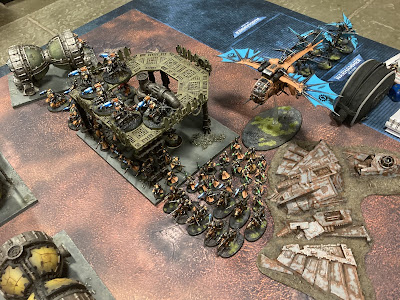 My list was a bit of a mix between attempting to build a sort of competitive army and just picking a load of new stuff to use. I had some Holy Orders, a relic and a trait on the Datasmith, but the only upgrades that were really relevant were a couple of Skitarii upgrade warlord traits on the big blobs, to let one count as being in cover and to ignore penalties for moving with assault/heavy weapons. 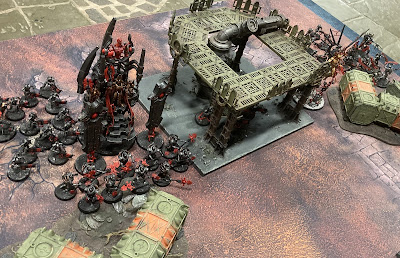 The Necron force was from the sinister 'Free movement and all Obsec' Dynasty, and had the obligatory Veil of Darkness on one of the Crypteks and the -1 damage trait on the Skorpekh Lord. 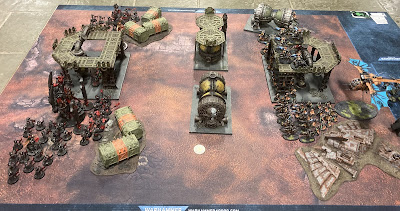 Deployment - the Pteraxii went in the sky, everything else on the board. We decided to call the industrial terrain features ruins for some line of sight blocking. Necrons got first turn, and used their free move to shuffle around a bit. I forgot the free move on my Serberys Raiders. 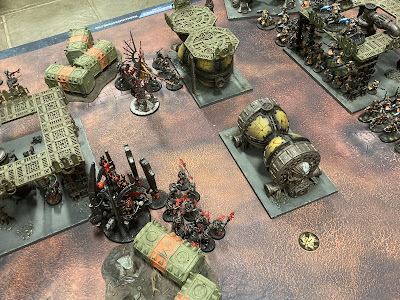 Necron turn one, moving up, mostly out of line of sight. The Silent King and Void Dragon sniped out a few Destroyers, while the Skorpekhs moved up to claim a middle objective. The big news was that the Fusilave suffered severe new model syndrome, getting blasted out of the sky by the Menhirs. Ooof. 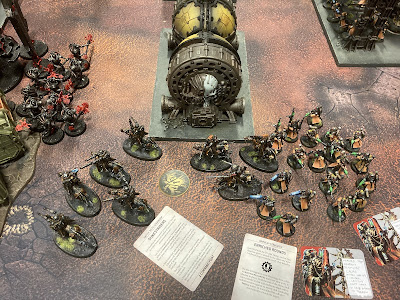 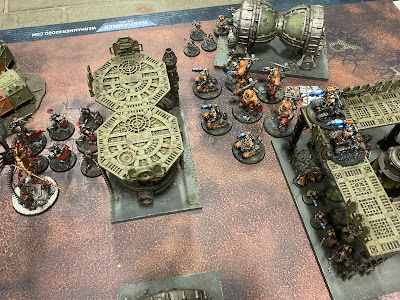 AdMech turn one, things moved around to try and claim the two middle objectives. Strats and Traits were popped on the Vanguard and Sulphurhounds to try and drag the Praetorians down with weight of fire. Even with enriched rounds, only five of them fell! On the other flank the robots got a wall of Breachers to shield them from a charge, while the Ruststalkers got a charge into the Skorpekhs. They did well to take out three of them, but one got back up and they wiped the Sicarians in return. 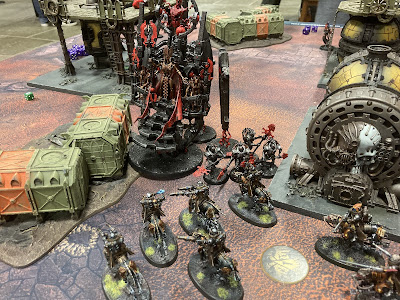 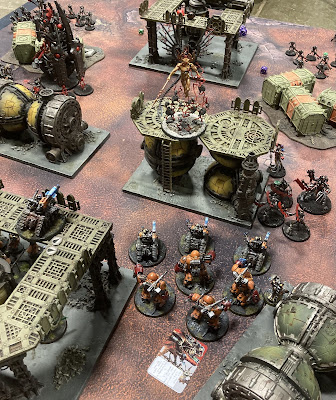 Necrons turn two, everything moved forward to engage. There was some shooting, killing  off the Sulphurhounds, but most of the damage was coming in melee... 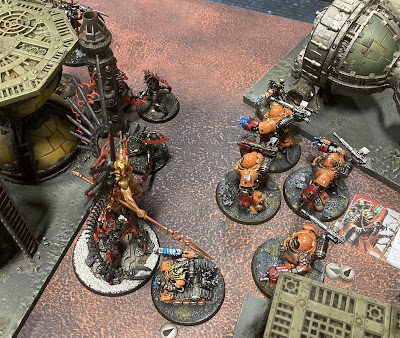 The Void Dragon struck first, reducing the Breachers to a single model on one wound. This meant the Skorpekhs couldn't fight unless they piled in and touched my robots, which they wisely chose not to. 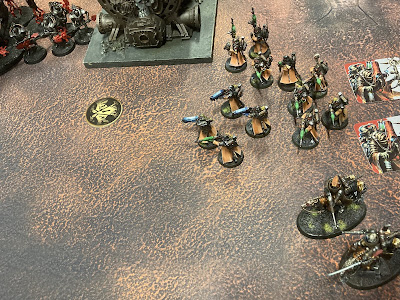 Elsewhere the Raiders were charged, and use Tactica Obliqua to run away, leaving the Praetorians to fail their charge and not hold the objective. 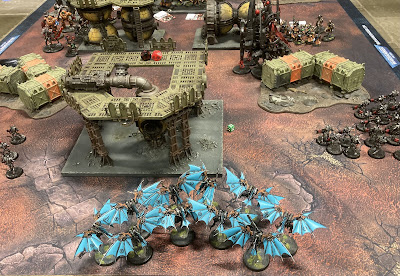 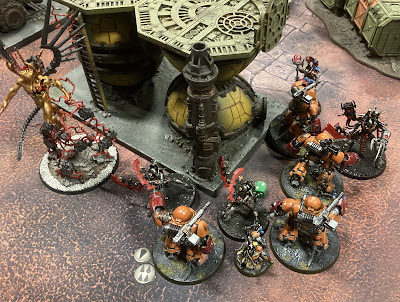 AdMech Turn two. The Pteraxii arrived, spreading flame far and wide, then making a big charge into the Immortals on the Necron home objective, finishing them in melee. Elsewhere shooting reduced the Praetorians to two, and the Kastelans charged into the Skorpekhs and their characters, killing all the elites and the Cryptek, but leaving the Lord alive to do some damage in return. The AdMech ended the turn in control of all of the objectives except the one with the Skorpekh Lord thanks to his ObSec. 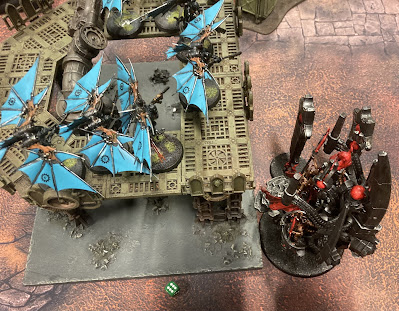 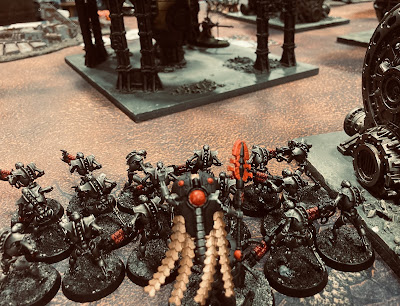 Necrons turn three and time for the big plays. Reaper warrior blob teleported into my deployment zone for Behind Enemy Lines, and murdering my Manipulus. The Void Dragon got into my robots and killed two, after the Skorpekh Lord had fought this left one remaining - though it was on the objective. The Silent Kind went backwards as well, but he didn't quite clear all the Pteraxii. 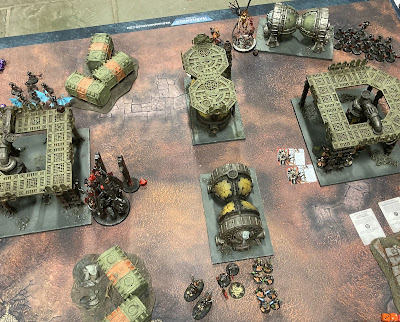 In AdMech turn three, I was controlling three of the objectives, so got the big 15 Primary, as well as points for Vital ground. However this turn didn't go so well in terms of actually killing things. Those stubborn Praetorians held on, the Pteraxii flew away and charged the rear unit of warriors, failing to do much damage, and the single remaining robot was unable to do enough damage on the Void Dragon to take it down. 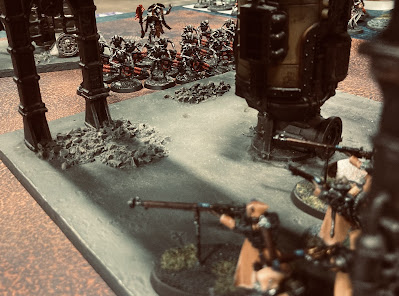 With not much left in the tank, and two big monster units owning the battlefield, the AdMech forces were quickly routed in the remaining turns. A big turn around from the high scoring turn three left me with nothing from the last two turns, and as a result a close looking game came out with a score of 71-42 to the Necrons. I think I probably chose the wrong secondaries, my list was missing some more chaff type units, and I didn't play well around the terrain. I don't like to blame dice too much, but I think I was also a bit unlucky not to wipe the Praetorians in the initial volley. Oh well, moving on to game two... 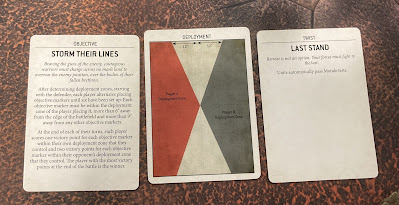 This time, to ease the pressure on my brain, we played with the Open War cards, with this scenario. Effectively three objectives each in a touching arrowhead deployment. One point for a home objective, two for an opponent's one. The twist was that it's a last stand - no morale at all! I guess this is the last battle for the tomb world, the Necrons fighting to push the Imperial forces off their world once and for all, while the Ad Mech huddles around the drop zone with nowhere to go. 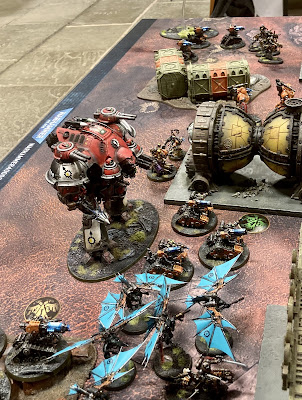 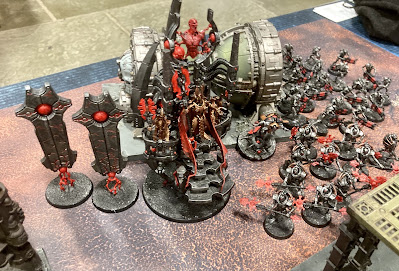 Dave took the same Necron list as before. Obviously the Silent King not wanting to change a winning squad. 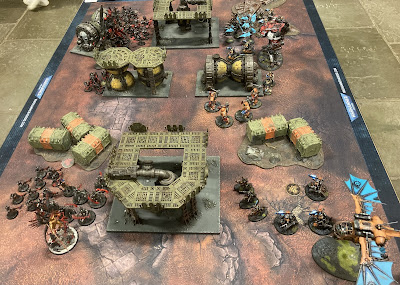 Deployment. Everything on the board. The robots taking advantage of the close deployment a bit, while the Necrons mainly concentrated in the flanks. I saved the flyer to deploy last so I could put it out of range of the Menhirs. I won the roll off this time and went first. 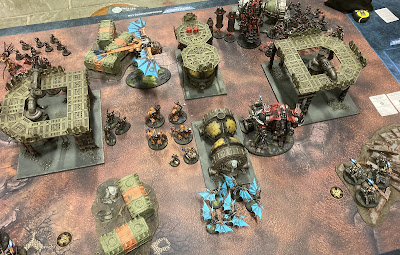 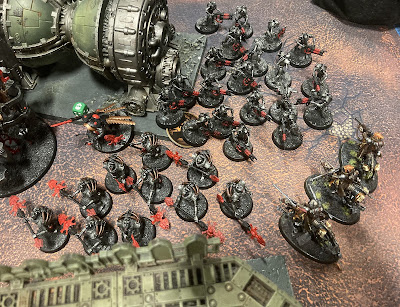 Turn one featured a general forward push, with the Pteraxii moving back to cover the central objective. I made sure to deny most of the Veil areas. The bomber actually got to do something, flying and turning to drop on the Skorpekh Destroyers. The Raiders also made a bold move to assassinate the Cryptek - getting enough wounds and mortals through with their sniper shooting but for a passed armour save. 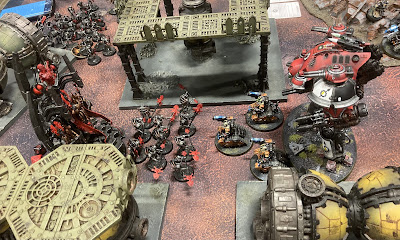 Necron turn one mostly involved trying to deal with what I'd thrown at them, while the Silent King made his move up the centre. The Raiders were removed in short order, as were the Breachers screening the Valiant. However the Fusilave tanked a lot of firepower for only a few wounds. The Praetorians charged the Valiant, perhaps unwisely, taking a lot of damage in overwatch, but their reanimation keeping some of them around. They did 10 damage, then took some stomps, sticking around once again. 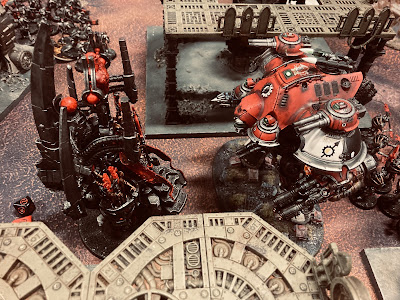 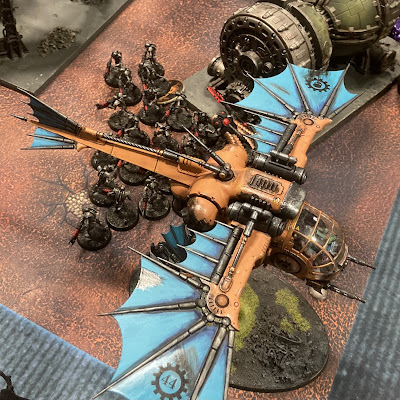 Turn two saw the Pteraxii Sterylizors move in to help remove the Praetorians after the Valiant stepped over them, while the Fusilave flew across the board to bomb the Necron Warrior blob. The Robots also charged the Immortals but thanks to stringing out to protect characters, failed to remove them from their objective. The main event was really the showdown between the Lady Helena's Valiant, The Defiant Flame, and the Silent King, Szarekh himself! His Menhirs had fallen already, so he took the full brunt of it's firepower. However a whole load of ones to wound meant he avoided the Thundercoil Harpoon and most of the meltaguns. The Conflaguration cannon did a chunk out of him though. Then the charge - Szarekh, wounded, was unable to kill off the Valiant, but degraded it enough to mean it's titanic feet were unable to destroy him.
Into Necron turn two, once again they concentrated on clearing their lines, failing to take down the Fusilave, but removing some pesky Sulphurhounds. The Void Dragon lined up a charge on the robots, but failed, so it was down to melee. The Silent King did finaly down the Valiant, and I spent three CP on Our Darkest Hour, to try and have her get back up on a 4+ - but alas, it was a three. To rub it in, my robots still didn't clear the Immortals! 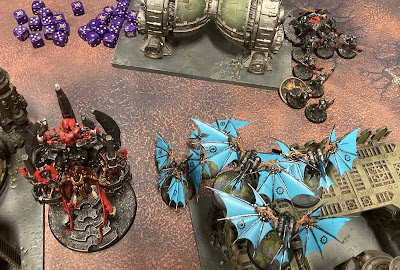 Turn three, the Pteraxii made their move towards an objective with previously bombed warriors, while the flyer doubled back and bombed the Skorpekhs again. Powered up Destroyers blasted the Silent King, but he passed most of his invulnerables. The Kastelans eventually took out the Immortals, leaving me controlling an extra objective at the end of my turn and going into the lead. 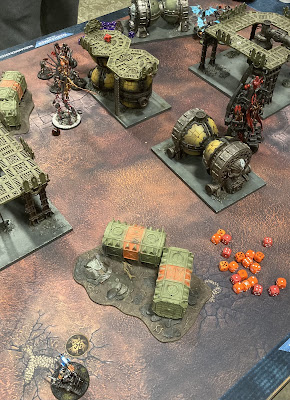 However the Necrons struck back hard, with the Skorpekhs and the Void Dragon piling into my Kastelans at once, killing them with ease. The Silent King also took one of my objectives to level things up, as shooting finally downed the Fusilave and the warrior blob resisted the Pteraxii. 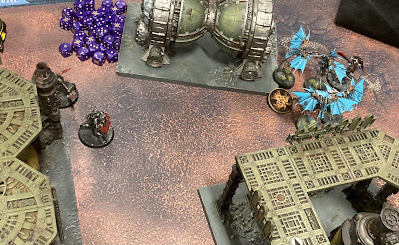 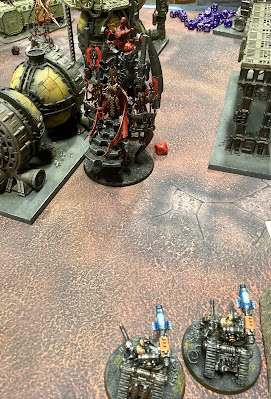 In a similar story to the first game, the Necrons dominated the last couple of turns, killing off most of my few remaining units. The Pteraxii did eventually finish off the Warriors, but the Skorpekhs moved in to kill them along with the Cryptek bonking the last one with a staff of 3+d3 damage. In the end I had a couple of Destroyers on a far away objective, who did manage to spitefully take out the Silent King with overcharged plasma! The end result was 20-16 to the Necrons.
It was a couple of fun games, and I think we both learned a lot about our armies. Both games I think turned into a bit of a war of attrition, which the Necrons were always going to win. I think the second more than the first hinged on a couple of big rolls - the Valiant's Harpoon failing against the Silent King, and then it's failed attempt to get back up. Both would have made a big difference, but then they were both big gambles and certainly can't be relied upon. I'm learning a lot about how the AdMech book works with my collection - I think in both games I needed more chaff units and less points and CP invested in buffs that weren't doing anything. Even though big blobs of Skitarii are 'in' right now, I think in future I'd run a load of 5 mans where possible in addition to one blob.
Anyway, hope you enjoyed all that, even though I lost both games it was still a fun day out. Stay safe!
Posted by Redtoof at 19:50