I recently had another game against my regular opponent John. I took my Alpha Legion for the first time since the great repainting/rebasing, while John wanted to play 'Ultramarines' featuring Fulgrim as a stand in Roboute Guilliman and lots of stompy dreadnoughts. This was out first game since the big FAQ so I wanted to make use of more command points so I took a Brigade detachment. It wasn't super optimal but had quite a bit of stuff in it.

John has a thing for Dreadnoughts. He took a Vanguard, A Spearhead and a Superheavy Auxiliary. Not sure I've got all the units in the right slots, I'm not too familiar with the loyalists.

The mission we rolled up was Targets of Opportunity (Chapter Approved Maelstrom where you redraw all your cards at the start of your turn) and deployment was Search and Destroy. 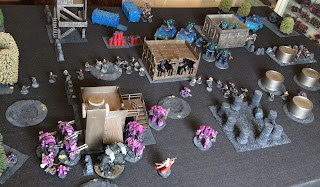 John won the roll off for first turn. I plonked a big line of Cultists in the way, covering several objectives in case I could deny them to John. Also hid my Predators behind a building and loaded up the Rhinos. 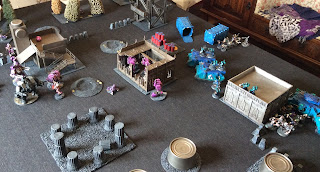 John's first turn featured a strong advance from the Contemptors and Venerables. His missions boiled down to 'kill stuff' so that's what he did. Both my Contemptors fell to shooting and most of the cultists in the big blob. Three of the dreads charged in to finish them off, denying me the chance to bring them back with Tide of Traitors. I semi-joked that John had fallen into my trap, though I do wish I'd left a bunch of cultists on the roof of the building so I could have denied the charge.

The trap is sprung! I drew cards to kill stuff in the shooting phase and claim a couple of objectives that were close enough for my cultists to advance onto. The Predators revealed themselves and all my infantry got out. In the Psychic phase both my Sorcerers rolled 11 for their Smites, melting one of the Contemptors. Firepower from my Power armour units, including Prescience/Veterans of the Long War/Endless Cacophony on the Melta Chosen and Daemon Shell from the Lord cleared out the two dreads in the building. The Predators fired on the Redemptor (unpainted models must die!) but some poor rolling meant it didn't even drop a bracket. Still, a successful counter punch. 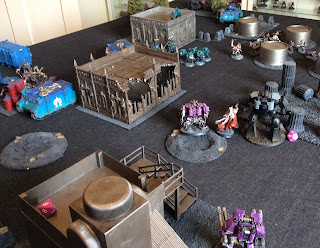 John picked up an objective in his backfield with the Mortis Dreadnoughts and unleashed the Bang Bang. My Chosen disappeared along with one and a bit Predators. The Venerable/Redemptor front line moved up along with Fulgrim. 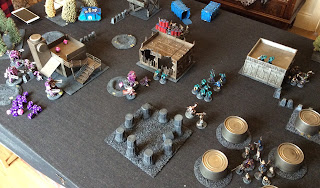 Suddenly I didn't have that much on the table, but still had a couple of Rhinos for being annoying. One advanced onto an objective, while the other was Warp-Timed into Fulgrim's face. My psychic/shooting was a bit disappointing, I removed the Redemptor but had to throw everything at it. Then, a brain fart. I charged the Rhino into the dread in front of him to both slow down Fulgrim and stop the dread from shooting. I forgot a few key things, 1-Ultramarine dreads can fall back and shoot, 2-It was a Venerable Dreadnought with a fist, hitting and wounding on 2s, 3-Heroic Intervention is a thing. Suffice to say, the Rhino did not survive. 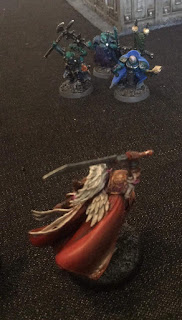 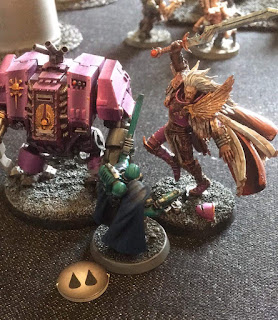 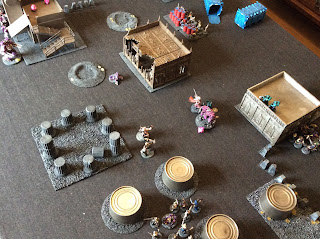 John's big guns cleared out the rest of my power armour troops, killed off my Predator and in an epic moment Fulgrim and his Venerable chum declared charges on all 3 of my HQs. Fulgrim sliced the Sorcerers in two, but the Dread failed to finish the warlord. 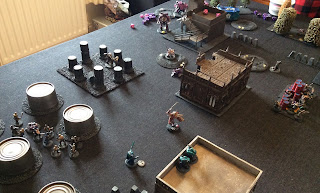 With my limited resources I tried to score some points. Objectives told me to kill Imperial units but didn't give me much else. My lord fell back, and opened up with his trusty Daemon Shell, dropping it to 1 wound. The remaining Havocs finished it off. Elsewhere my remaining Rhino charged in to one of the backfield Mortis dreads to reduce it's firepower a bit.

Last couple of turns became a mop up mission for the Not-Ultramarines. Fulgrilliman finished off my Lord with an honourable blast of bolt shells to the back, before finishing off the infantry in my corner.   My Spawn tried to charge the Contemptor Mortis to hold it up, but overwatch killed one and the other got squashed in melee. That Mortis did some work this game, finishing off my remaining cultists as well as all his previous kills. 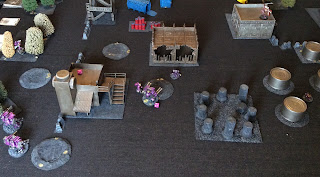 At the end John had managed to grab a few more objectives while finishing off my force entirely. Ouch. I think I had a good start to the game but it all went wrong very quickly. John had some decent luck, at one point getting 5 free command points in a single turn thanks to the warlord trait, but I think the biggest issue was my 2nd turn shooting and Rhino charge. If I'd have left the Rhino in the way to hold up Notty-G for another turn I might have been able to smite him or something. I'm not sure the result would have been much different, but that was definitely the biggest mistake of the game. Still, it was fun seeing Fulgrim on the table, doing Primarch things.
Posted by Redtoof at 18:03