Another battle report. This time I took my Tyranids against regular-opponent-John's Emperor's Children. We played Race to Victory from Chapter Approved, though the mission was largely irrelevant because we were were playing Monsters vs Dreads!

My list was Hive Fleet Jormungandr (which made literally no difference as you will see shortly), Battalion, Spearhead and Superheavy Auxiliary.

John took something like this:
HQ: Daemon Prince, Lord on Steed
Elites: 3 Contemptors with chainclaws with inbuilt Soulburners, 2 Sonic Dreadnoughts with Blastmasters and Missiles
Heavy Support: 2 Decimators with double Soulburners. Leviathan with drill and Soul Burner 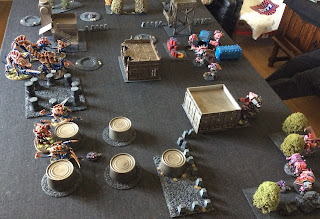 Deployment. John's Sonic dreads take the flank while the rest of his forces are more central, holding behind terrain where possible. I blobed most of my units around the Malanthrope, with the Carnifexes off on the flank opposite the Sonics and the Trygon and troops hanging underground. John got his dreads down first but I still won the roll for first turn. 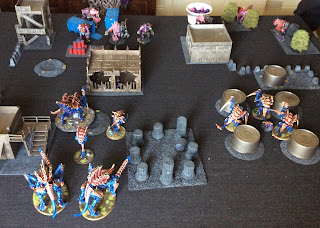 The Fexes moved up while my castles units spread out while maintaining Malanthrope radius. Heavy Venoms and Rupture Cannons fired over at the Sonic Dreads, killing one and earning first blood, but no further damage. 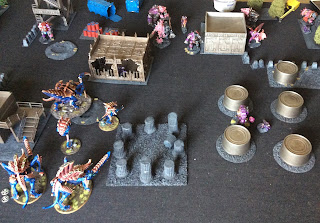 John's first turn was pretty brutal. Soul Burners unleashed on the Carnifexes, even with some below average rolls killing both. The remaining Sonic Dread fired on one of the Tyrannofexes to try and take revenge for his brother. One of the Contemptors was Warp-Timed up to charge Old One Eye, easily dispatching him with his chainfists. I used the Stratagem to fight back and knocked off a few wounds, but I was a little worried at this point by all the Mortal Wounds flying about. 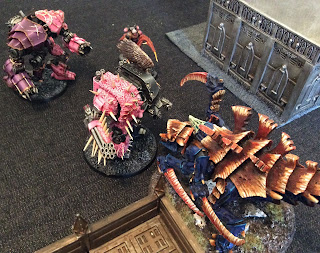 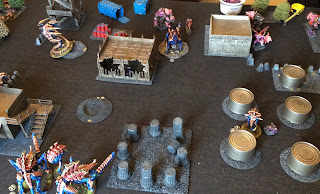 My turn two, and everything went right. Trygon dug up along with the troops, who appeared rather irrelevantly by some objectives. The Scythed Hierodule licked his lips and moved up to near the Leviathan, staying 8.5 inches away, as I have been burned by those Hellflamers before. The Hive Tyrant moved up to the Contemptor that killed off Old One Eye. In the shooting phase between the Hierodule's Bio Acid, the Miasma Cannon and some very lucky splitting of fire from the Tyrannofexes (splitting fire always works!) I killed off one Contemptor and heavily damaged the other two, softening them up for charges from the Trygon and Tyrant, who, along with the Hierodule, all made it in. John used the Emperor's Children Legion Tactic to interrupt and try and kill off the Tyrant, but probably should have targeted the Trygon. All the Contemptors fell, as did the Leviathan. 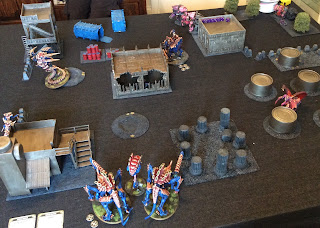 John tried to fight back, using the Prince to kill off the Tyrant and the decimators to pump mortal wounds into the Hierodule. Luckily I'd put Catalyst on him, and even more luckily, I passed half of the roles leaving him still in his top bracket. 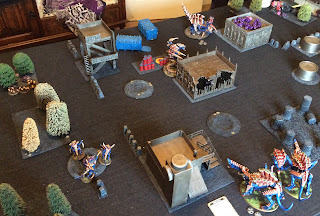 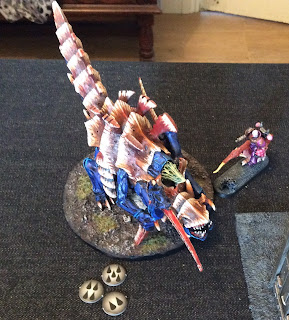 My turn three and the Prince got a bunch of Rupture Cannons to the face. The Hierodule, having whale of a time, charged and killed both Decimators. The Lord Heroically intervened for the lols, knocking a wound or two off, but at this point John conceded, having only two models remaining.

A fun but quick game, though I was very lucky with the shooting turn 2, and John had some classic bad luck from that point on. 8th edition is really working for the Scythed Hierodule. John admitted that he should have focused him down on turn one instead of the easier kills of the Carnifexes. I think I would have panicked less, but I think he's probably right. The Hierodule is capable of so much damage if left to his own devices.