More Adeptus Mechanicus work recently. This time some troops, Skitarii Vanguard! I decided to go Vanguard rather than Rangers as I already have a unit of Rangers and now that the Ryza Forge World Dogma is a thing I thought I might occasionally use the -1 toughness ability from the Vanguard's Rad Saturation to benefit the reroll wound rolls of a 1 in melee. If I remember the trait even exists of course! So here they are: 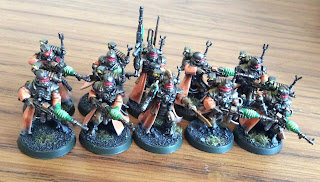 Of course the Radium Carbines have to glow green. It's radiation! I also tried to make their armour look especially dirty, as they have a certain trench warfare feel to them. Perhaps the servitors that clean their armour keep dying of radiation poisoning?

The full squad is 10, all with Radium Carbines, an Enhanced Data-tether and a Powersword on the Alpha. The sword is a bit of a luxury that will be one of the first things to drop when I need to shave points (though it might catch some people out with the aforementioned -1 toughness) so I painted it gold rather than glowing to represent a normal sword if required. I also plan to use the Data-tether as a second Alpha if I need to split the unit into two for minimum size troops. 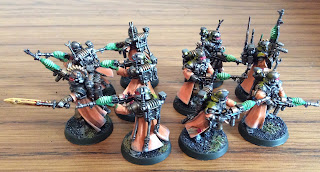 They may be a bit busy, but I'm fairly happy with how the turned out. The glowing shoulder lamps in particular I'm happy with, as I used a similar technique on my Ranger squad but it wasn't quite as noticeable. 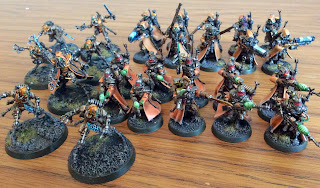 And here we have the Skitarii Vanguard in it's natural habitat - alongside the other Skitarii infantry. You'll notice the orange is a bit redder for this unit - while it's not as obvious in real life, it is a sad result of my ever diminishing pot of Macharius Solar Orange. *Cries in binary*
Posted by Redtoof at 14:09