This is the first of three battle reports of my games at Double Trouble 4, a fun and random doubles tournament for 40K held at Element games, run by Alex of the From The Fang blog. You can find all the rules and details here, but the jist of it is that each player took an 875 point list and played three games with random opponents and a random partner each time. Points were scored separately for holding objectives at the end of a turn and for destroying enemy units.

In the first game I was teamed up with Callum and his Custodes supreme command detachment. He had 3 Shield Captains on jetbikes and 1 on foot, as well as 3 Allarus Terminators. (Apparently he wasn't sure if this was cheesy - I think we agreed that yes, it probably was.) Clearly my sneaky Alpha Legion had convinced them that they were totally loyalists, honest. On the other side of the board we faced Alex, the tournament organiser with his House Raven Knights - A Crusader and 2 Helverins. I absolutely appreciated the orange on these guys. Apparently the list was chosen not for the power of it's 3 models, but for the ease of simultaneously running a tournament while playing the game with them. Alongside the Knights were Matthew's Space Wolves, who were granted special allowance to use the new codex after the list submission deadline because Alex is a nice man, and his blog is literally called 'From The Fang'. I'm pretty sure I played either with or against Matthew in the first Double Trouble event when he was running Tau and I was running Ad Mech, so it was cool to clash once more/for the first time. His list included 3 Wolf Lords on Thunder Wolves, 5 Intercessors, 5 Grey Hunters, 5 Blood Claws, 5 Long Fangs and 5 Skyclaws. 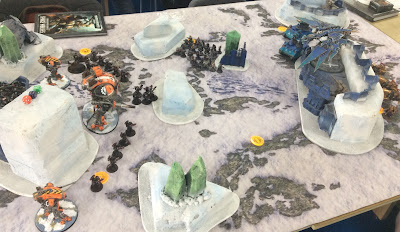 We set up in the wedge shaped deployments for this one. Callum and I both spent command points to use bonus relics (taking the 'Slaaneshi Steroids' my warlord would now strike at strength 10 with his power fist), and I spent a command point to deploy the Cultists as Forward Operatives. The Terminators started in reserve, as did the Skyclaws. We won the roll off for first turn and we were off! 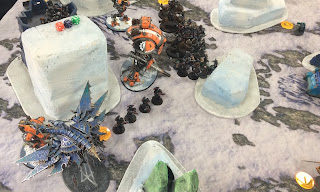 Our forces moved up the board to take objectives and cause problems. (Apart from the walking Shield Captain who stood behind a building on an objective for the entire game.) The Cultists managed to kill off 4 marines or so and then tie up two squads and 3 wolf lords, keeping them penned in for the first turn. On the other flank the Heldrake totally fluffed breathing on the Intercessors, via me rolling a 1 for the number of shots for the Baleflamer, after a command reroll! More importantly, the drake successfully charged one of the Helverins, keeping it from shooting next turn. 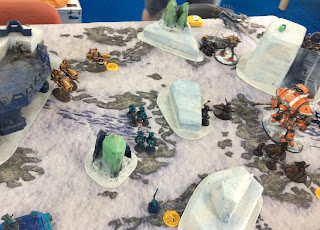 After Alex and Matthew's first turn they were still mostly stuck in their deployment zone. They popped one of my Rhinos and obviously finished off the cultists, but failed to drag the drake out of the sky. The Helverin that could shoot blasted it for 4 wounds, each doing 3 damage, and I only passed one save after a command point was used, but after that it passed everything and stubbornly stayed up with 3 wounds left. 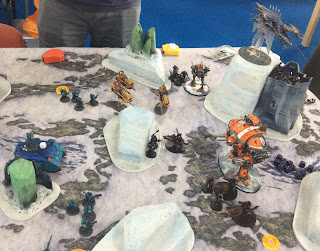 Our turn 2 and the Jetbikes moved up for charges. My Rhino deposited a squad to sit on the objective, before driving up with the Warlord on board and popping the smoke launchers. My other two squads spread out to cover the middle objectives. I debated leaving the Heldrake in combat with the Helverin and Intercessors to keep the tied up or jumping up to set fire to the Long Fangs. In hindsight the smarter move would have been to stay still, but I wanted to burn stuff so the drake jumped up and promptly got 1 or 2 shots with the Baleflamer for no damage. In other news, we forgot to bring the Terminators on. Not a very killy turn, but we did hold most of the objectives. 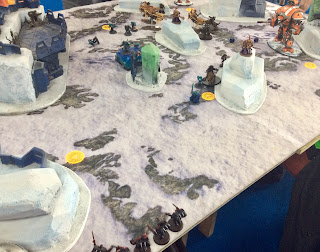 The Skyclaws were not forgotten however, coming on in our rear to threaten an objective and the squad that was sitting on it - until the Crusader fired on them with the rapid fire battlecannon. Elsewhere the Helverins took out the Heldrake and all three Wolf Lords got into combat, eating one of my remaining squads and largely bouncing off Custodes invulnerable saves. The Intercessors also managed a charge onto one of my remaining units to take an objective from them. 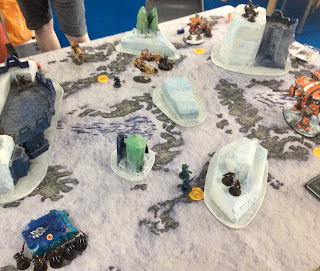 Turn 3, and the Terminators finally arrived (Callum had placed the models in highly visible spots around the board so as not to miss them again), and started chopping their way through the Armigers on the flanks. The Shield Captains killed off the Intercessors and a Wolf Lord, while my warlord punched another one in the face with a power fist. The third Shield Captain on bike charged the Long Fangs but had a bit of a whiff. I didn't have much left on the board, but I spread out and managed to hold 3 objectives at the end of our turn.

In response, the Skyclaws charged the Rhino to take the objective (but failed to kill it), while the remaining Grey Hunters sneaked onto another objective while staying 3 inches away from my Lords to avoid Heroic Intervention. The Knight blasted the Long Fang hunting Shield Captain off the board. With time rapidly running out, in the final act of the game, the Allarus Terminators felled the second Helverin.

In the end while it was very close on blood points (we scored 846 to their 796), Callum and I were comfortably ahead on the objectives (we came out with 13 to 8). It was a little disappointing to only get to the end of turn 3, but this was mainly because we were having a good time chatting and drinking tea (thanks Alex!), so it wasn't really a problem. My army mostly got blown off the table, but it did score us a lot of points for objectives (which was my intent from the beginning this time), and both the Lords survived, so clearly the losses were acceptable, plus many loyalists fell this day, which is nice.