This is the third of three battle reports of my games at Double Trouble 4, a fun and random doubles tournament for 40K held at Element games, run by Alex of the From The Fang blog. You can find all the rules and details here, but the jist of it is that each player took an 875 point list and played three games with random opponents and a random partner each time. Points were scored separately for holding objectives at the end of a turn and for destroying enemy units. First report can be found here, second one here.

Final game, and it's Chaos vs Imperium again, with a familiar foe on my side - Regular Opponent John and his fabulously dirty Renegade Knights. He took a rather brutal combination of two fist/chainsword Knights and an Armiger Warglaive. Not much board coverage for him, but very, very stompy - in fact John had already dealt out two tablings at this stage. This didn't look like it would be a push over though, up against us were Rob's Catachan Spearhead with Yarrick, Harker, 30 Cultists Conscripts, 3 Basilisks, a Wyvern and a Manticore. And as if that wasn't enough guns, his partner was Greg with a Supreme Command Astra Militarum detachment with a Commisar, 2 Psykers, a unit of Bullgryns and a Baneblade. I played Greg at DT3 in game 3 and that time the Bullgryns gave me a significant spot of bother.

Technically the game was supposed to be Rob and myself vs John and Greg, but in true Double Trouble spirit, we decided to switch around for the classic battle of Imperial vs Chaos, Guns vs Swords, brown/camo vs pretty colours. 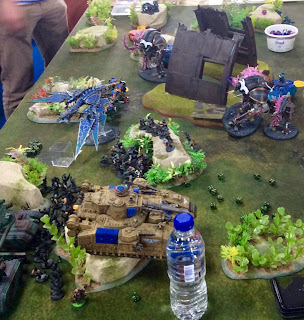 Unsurprisingly we set up first and ended up getting first turn. That was 3 out of 3 first turns for me, which was very helpful. We moved up aggressively, having spent a command point to put the Cultists infiltrating up the board to try and take out the opposing not-cultists. I disembarked both the melta Marine squads and ran them out onto the two objectives on our side of the board. A very lucky long range shot from the Armiger hit and wounded the Manticore three times, but with a command point reroll we turned a 2 into a 1 for damage leaving it on 2 wounds. The Heldrake failed to finish it off, but it was now very poorly. One of the Knights charged the Bullgryns, who were standing next to Yarrick and a Psyker, and stomp stomp stomped on them killing off only one and a bit. 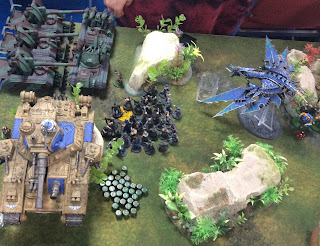 Between Veterans of the Long War, Endless Cacophony and charging, the Cultists reduced the not-cultists to about 10 models, and as a result managed to just about claim the objective they were standing on. This gave us 4 objectives on the first turn - a good effort, though we had yet to actually kill anything and we were about to be hit with all of the Guard's firepower.

My forces were largely ignored as the big guns focused on the Knight on the left. Artillery fire (aside from the Wyvern) and the Baneblade went into it, splitting off the heavy bolters to kill off the Cultists. Good shooting from the Basilisks was met with Rotated Ion Shields and some good saving throws from John. I think he had used all his bad luck on our game earlier in the week. The Knight just about dropped to half. In the charge phase the Baneblade looked to run over the Armiger and reduced it down to about 3 wounds, but crucially leaving the super heavy tank locked in combat and unable to overwatch. I understand Greg had tried this manoeuvre with more success earlier in the day. 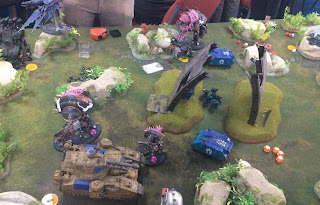 In our turn 2 we continued to hold objectives. My plasma toting Marines and Lords jumped out to assist the top Knight against those troublesome Bullgryns. The damaged Knight went around the back to charge the Baneblade, leaving the Armiger in to keep it from shooting back. I spotted a golden opportunity with the Heldrake who had been having quite a successful day up until this point. We popped Daemonforge on him to ensure the Baleflamer could finish off the Manticore... 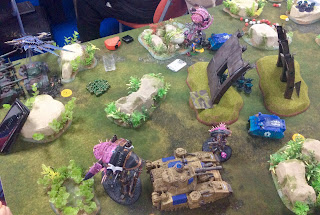 ...before charging the heroic Heldrake into the Wyvern and two Basilisks, along with Harker. Harker survived with one wound, but that was one artillery piece destroyed and 3 unable to shoot next turn, which was absolutely massive. And speaking of massive, the Knight on the left charged into the Baneblade, using the Renegade Knight re-roll stratagem to get all hits and wounds with the Reaper chainsword, cleaving the steel behemoth in half! Elsewhere the other Knight charged in, killing the Psyker that was buffing the Bullgryns, as well as killing more of them.

This was a hugely decisive turn, where everything went right for us, and did not leave the Astra Militarum many options to respond. Rob shuffled his artillery to break them out of combat and fired the remaining basilisk, and that was pretty much it. 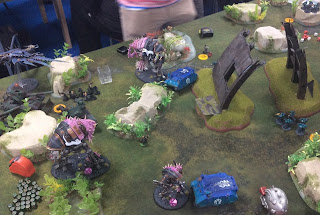 With the Bullgryns finally falling, the Knights marched on the Catachan artillery, while the Drake continued to harass and distract them. My two Lords charged in to finish off Yarrick, while the Drake ate a Commisar and eventually Harker. In the middle turns Rob and Greg resorted to firing the remaining guns at selective targets to try and reduce both Knights to half and score some blood points. 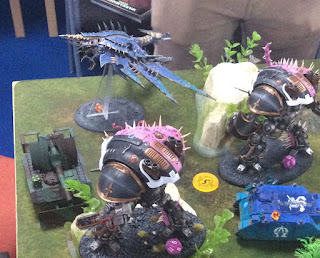 They eventually succeeded in bringing both Knights below half, along with the Drake (mainly through overwatch) but in turn 5 and 6 the game was really over and it was just about us maximizing points. At the end of turn 6 the Guard were removed from the table.

This was a crushing victory for the Chaos forces. 1750 Blood Points to 731 and 25 Objective points to 5. The game swung massively in our favour on turn 2 when the Heldrake shut down nearly all of Rob's shooting while the Knight killed off Greg's Baneblade, and they simply did not have enough resources left to recover. I have no doubt that in slightly different circumstances Greg and Rob may have blasted us off the board before we ever reached their lines, but getting first turn and having some strong dice early one definitely gave us the edge. Having said that I think John and I pretty much made all the correct moves in that game, and our two lists complimented each other nicely. Being the 'support' to a destructive list like John's was basically the original intention of this list, so it was nice to see it working as it's supposed to.

And with that, it was time for the results. I won't go into great detail about who won what and placed where - because you can find all that on Alex's From the Fang blog here. Unsurprisingly, with 3 tablings to his name, John picked up the Genocidal Maniac award. The Master Tactician award was much more hotly contested. I came in 3rd with a combined 59 points, only a point behind second place and a mere two points behind first! I'm pretty happy with that! In other news John also won the conversion competition... 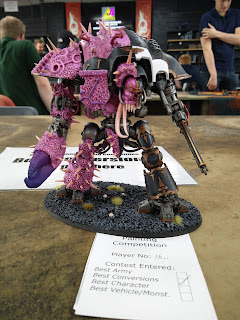 It seems that a good day was had by all. Especially my Heldrake, who was an absolute hero and definitely my MVP. I think he deserves some kind of name (though I'm not really sure what kind of name a Heldrake would have? Suggestions below please!) The Cultists also did their job, successfully causing problems then being conveniently dead by turn 2, and the rest of the army performed admirably, if not spectacularly as well. 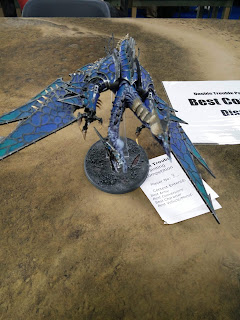 Sadly, as mentioned elsewhere, this was the last event run by Alex, but there is hope that someone else will pick up the torch and run more Double Trouble events in future. Whoever that is, I wish them the best of luck, as I think we will all have very high expectations for DT5!
Posted by Redtoof at 11:32