What kind of Sorcery is this?

After having a fabulous time playing a game with Hive Fleet Goliath against Winters SEO for one of his awesome Battle Reports, I’m ready for more! I really had a great day playing a friendly, narrative focused game with an eye on making sure it looked cool for the internet. I can’t really say until the video goes up, but I think we did a good job of that.

Anyway, I’ve arranged to play another game with a YouTube battle reporter, this time with SorcererDave. SorcererDave runs a pretty big channel but most of his content is video game based, however he has recently branched out into filming 40K battles with a narrative focus. He’s not quite built up the wide network of opponents yet that Winters has, so I kindly offered to ‘help out’. Because playing cool narrative missions of 40k on beautiful terrain with a strongly themed army is such a chore.

Anyway, we are going to be playing a 1750 point narrative game with his Imperial Guard/Astra Militarium against a combination of my Tyranids and Genestealer Cult. The army will look something like this: 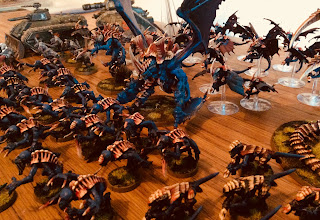 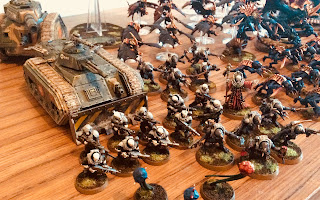 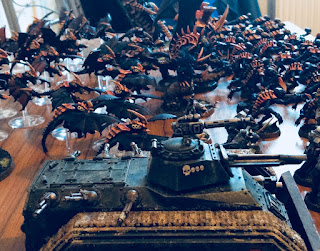 The list is heavily themed around the first wave of a Tyranid invasion, with lots of units dropping from the skies or from ambush, and with the core of the Genestealer Cult force acting as the Guard ‘reinforcements’. The Warlord Hive Tyrant and the Tyranid units are in a Jormungandr Outrider detachment, while the Genestealer Cult forms a Battalion. The adaptation doesn't really do anything for this list, but it's narrative so I feel the need to stick with the one that is the 'official' adaptation for Hive Fleet Goliath. I'm also considering using a stratagem to throw down some spore mines at the start of the game, as that would be very thematic for the first stage of an invasion, so they are in the pictures but not the list itself. (It's narrative so I won't have to save reinforcement points for them.) 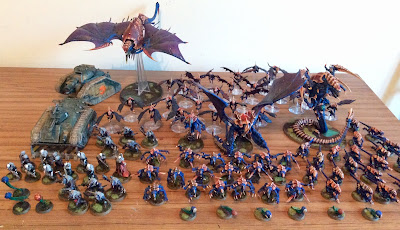 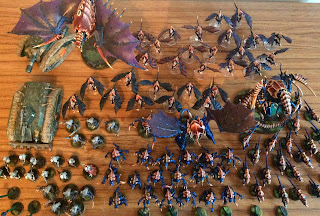 Hopefully it all goes well and something that looks cool will come out of it. There is a little scrap of a plan that if it is successful we might turn it into a multi part narrative campaign, but we shall see...
Posted by Redtoof at 10:59