This is the second of three battle reports of my games at Double Trouble 4, a fun and random doubles tournament for 40K held at Element games, run by Alex of the From The Fang blog. You can find all the rules and details here, but the jist of it is that each player took an 875 point list and played three games with random opponents and a random partner each time. Points were scored separately for holding objectives at the end of a turn and for destroying enemy units. First report can be found here.

In game two I had the good fortune of a narrative appropriate match up. My Alpha Legion partnered with Jonathon's Death Guard patrol, containing a Daemon Prince, a Malignant Plaguecaster, a Plague Marine squad, a big Cultist blob and two Bloat Drones. We had a big Chaos hug to celebrate our joint hatred of the false emperor. With almost 60 cultists between us plus plenty more objective secured I think we were pretty confident we could have the board control.

Our opponents were, appropriately, both playing Space Marines. David, who I played against in game 1 of DT3, brought a Spearhead of his Executioners (Crimson Fist rules) with Captain/Lieutenant combo, 2 Devastator squads, a Whirlwind and a Leviathan Dreadnought in a pod. By his side was Chris with an Ultramarines Vanguard full of Dreadnoughts. I think there were 2 regular ones, 1 Venerable, 1 Contemptor and a Chaplain Dreadnought to lead them. They had a lot of guns and some combat punch, as well as plenty of tough units, but aside from the Leviathan dropping in somewhere, they would be mainly fighting from their own deployment zone. With all those dreads I opted once again to spend a command point to juice up my power fist Lord with the Slaaneshi elixir.

During deployment we decided to overload one flank, with the Heldrake and the majority of the Death Guard on the right, while only the Plague Marines took the objective on the left. My Rhinos with Marines took the centre to push forward and claim ground/objectives. Our opponents set up the two devastator squads in the raised structures with objectives on the flanks and spread the dreads across the line. I used Forward Operatives once again to put Cultists in their faces and hopefully tie them up.

David and Chris won the roll for first turn, but this was all part of the plan as I proceeded to seize the initiative! 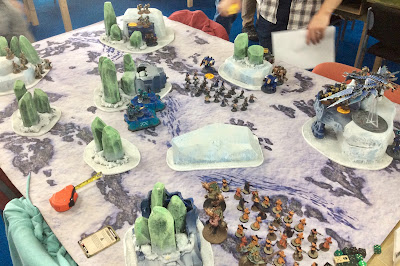 Turn one movement underway. We covered the objectives on our side of the board while the Cultists swarmed over their central one. The Heldrake decided one of the Devastator squads looked tasty/flammable and flew over to them, with the Nurgle force moving up slowly behind. Note the Contemptor hanging in the corner to the right of the Drake - at this stage the Daemon Prince called him out as a target, in 2 or 3 turns... 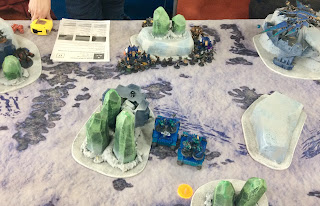 Cultists shot up two dreads, plinking off a few wounds, before charging in the tie them up. Sadly I forgot they were Ultramarines so they could just walk away and still shoot me. On the right the Drake dispatched the Devastators. 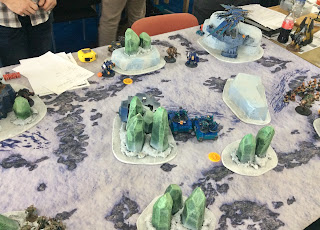 In return the loyalists dug their heels in and opened fire. The Alpha Legion cultists fell, largely due to a big roll from the Executioner's Whirlwind, while the Death Guard ones lost a few of their number. The Heldrake became a huge target, taking fire from many dreadnoughts. A Flak missile from the remaining Devastator squad, combined with the Armorium Cherub, hit for a whopping 6 mortal wounds, but when all the smoke cleared the Drake remained on 2 wounds. The heroic Captain and Lieutenant revved their chainswords and charged in, surviving the overwatch and dealing a single wound! Shades of the first game for the mighty Heldrake! 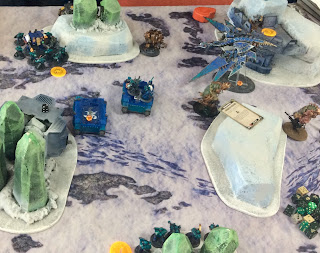 In our turn 2 we moved out further. I dropped my plasma squad onto our central objective, while the Plaguecaster hung back on the right flank. Over on the left the Plague Marines moved up slightly to get some shots at the Devastators. My melta toting marines got out to try and finish off the two damaged dreads, while the Drake and one of the Bloat Drones flew down to assist. Lots of fire and bile covered one of the armoured veterans, causing him to explode! Luckily the Drake only suffered one wound, knocking off the one he regenerated at the start of the turn. The Marines then charged the shooty dreadnought to tie it up (surrounding it this time!) and claim the objective.

It looked like we were all over the loyalists, but in their turn 2 a big scary Leviathan Dreadnought podded down into our deployment zone. We quickly decided to ignore it and run away, allowing it free reign to start clearing us off the back objectives. More firepower reduced the remaining Cultists and eventually brought the mighty Heldrake out of the sky, causing it to explode and put wounds on both Bloat Drones, but fail to kill the wounded Captain. My Marines finished off the surrounded Dreadnought in melee for minimal loses.

Rhinos shuffled, Lords got out, Drones flew up to face the characters. Not much luck with out remaining shooting, but a lot of charges happened. My remaining Marines got in to the Venerable dread armed with missiles and plasma to force him to hit at -2 next turn. My other squad surrounded the Whirlwind and spent the rest of the game chipping away at it. The two Lords charged the Chaplain Dread, while the Prince charged the Contemptor and the Bloat Drones went in on the Captain and his Lieutenant. Lots of saves came out on all sides, the Chaplain activating the Armour Indomitus relic to survive my fist Lord, before crushing him in return. Both Marine characters survived against the Drones, while the Contemptor and the Prince tore big chunks out of each other. 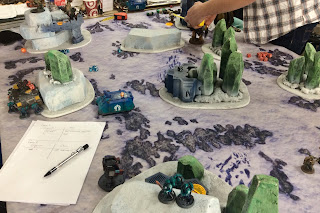 Over the last few turns we continued to score objectives while the Leviathan continued to clear out half of the board. My Marines took out the Devastators and held their objective while the Bloat Drones finally removed the characters, allowing the few remaining cultists to take their place. I think the Chaplain Dreadnought eventually fell, as did the Contemptor. I think it exploded and killed the Prince? Either that or the Prince died and killed it with mortal wounds from the suppurating plate. My Marines finally destroyed the Whirlwind, causing it to explode and leave only the champion, who decided he had done his job and fled the field. The end was a bit of a blur to get turn 5 in the time limit, but I remember lots of stuff exploded.

In the end the blood points were incredibly close - the snow now covered in loyalist and traitor blood alike. Jonathon and I picked up 1182 but David and Chris just pipped us with 1189. However our board presence paid off in a big way on the objective points, with the forces of Chaos trouncing the followers of the corpse god 21-8. Another fun and successful game for the Alpha Legion. Once again the Cultists and Heldrake gave us some invaluable early disruption while the Rhinos and Marines were able to cover the objectives all the way through the game - just as planned!