Had a game a little while ago against regular-opponent-John and his Emperor's Children. 2000 points, Open War deck once more. We drew a mission that required 3 objectives, holding one was worth 1 point at the end of your turn, but taking it off your opponent was worth 3 points! We also drew a twist that required us to draw 2 further twist cards. In the end everything was immune to morale and all shooting and psychic ranges would be reduced to 12 inches, with the possibility of increasing as the game went on. For deployment we drew a wedge from the long edge into the middle, and on the other side two corner triangles, forming a V shaped no-man's land. It's worth noting this game was played before the September FAQ. I'm not sure if it would have made much difference though.

My list was essentially the same list I later took to play against SorcererDave in his recent battle report. I just added in an extra Leman Russ and a couple of Genestealers to make up the points. It was made up of a Genestealer Cult Battalion and a Tyranid Outrider detachment. In this game however I used the Kraken adaptation, since in this one off game my usual go-to Jormungandr wouldn't help very much. I wasn't expecting much from this list since it was designed for a narrative game, but I thought it'd be interesting to see how it held up.

John's list was a bit of a classic John list, from before he discovered Renegade Knight Gallants. It was an Emperor's children Battalion, Vanguard and Super Heavy Auxiliary detachment. 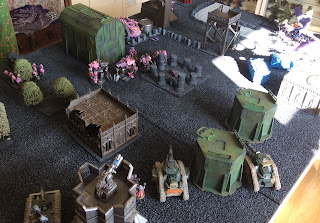 We deployed up, with the objectives near the Spartan, the middle in the circle of pillars and just left of my Vanquisher. I put my cult units to defend the objective while the flying Tyranids came out of the sun on the other corner, barely visible in this picture. The Acolytes rode in the Chimera, while the Trygon was underground with the Termagants and the Patriarch/Genestealers were ambushing. For John's side everything was on the table bar the Noise Marines riding in the Spartan. We rolled up to see who went first, which John won, but then I stole the initiative!

First turn and the Tyranids swarm in. The Leman Russ tanks moved to get range on one of the Decimators, while the Chimera moved around the building. Shooting from the Chimera on the left flank, and Gargoyles on the right removed a few cultists. The Russes did some damage to the Decimator while the Crone did something to one of the dreads. I was hoping to maybe kill one of them, but as the internet will tell you, Vanquisher cannons are not very good. One of the cultists ran away, before running back again when we remembered we were ignoring morale this game. 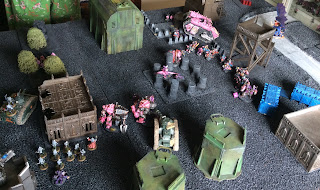 John's turn 2 was predictably brutal. The Noise Marines disembarked and killed loads of Gargoyles. The Sonic dreads killed a load more. Spartan put wounds on the Hive Tyrant and the Decimators damaged the Leman Russes. In the assault phase the Crone was torn out of the skies by the combination of a Sonic Dreadnought (which I think took damage from overwatch) and the Noise Marines. The Decimators smashed the Vanquisher, consolidating into the regular Russ. A strong showing from the Emperor's children, claiming two of the objectives and putting pressure on the third while eliminating almost everything they aimed at. But it wasn't over yet, it seems the Genestealer Cultists were just about to spring their trap! 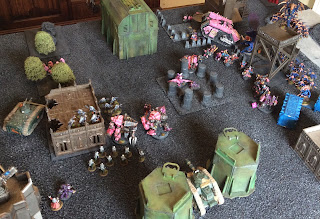 My turn 2 and all the reserves arrived, as well as the Hybrids getting out of the Chimera and heading towards the Decimators and the warlord. On the right flank the Genestealers and Patriarch emerged with a 4 inch bonus move from the Cult Ambush table, while the Trygon popped up, ready to charge the Spartan. Shooting from the demolition charges and psychic powers took out one of the Decimators and severely damaged the other. 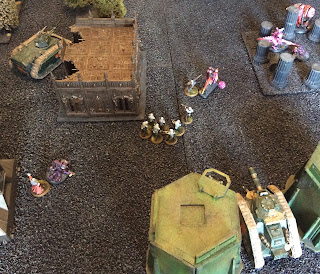 Melee on the left flank put wounds on the Lord and killed the Decimator (which exploded to wound the lord further) at the cost of almost all the Acolytes. One remained in melee with the warlord. 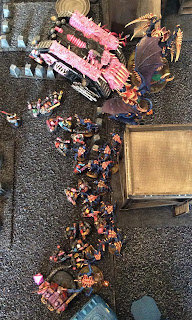 On the right flank, things were getting interesting. The Genestealers, having Might from Beyond cast on them, charged the Noise Marines and the Sonic Dreadnought to try and save the Patriarch from it's overwatch. They lost 8 of their number getting in, and failed to reach the dread, forcing the Patriarch to weather the Doom siren and Blastmasters. At the top the Trygon and the Hive Tyrant made it into the Spartan, having already wounded it in the psychic phase. The 12 remaining Genestealers attacked first, with 5 strength 5 attacks each, hitting on 2+. Then the Noise Marines that died fought back thanks to their Music of the Apocalypse rule. 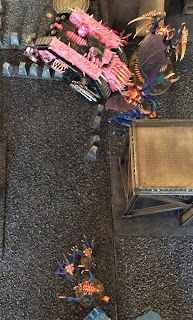 This is what it looked like afterwards. From both units, only 2 Genestealers remained. The Patriarch survived the dread's swings, killing it in return, and the big monsters put a big dent in the Spartan. Sadly as a superheavy tank it would be able to just trundle off and keep firing, though at a now reduced ballistic skill. So after my turn 2 the battlefield was suddenly a lot emptier. I still held one objective but with a lot of John's key units dead or diminished, it could certainly swing either way. 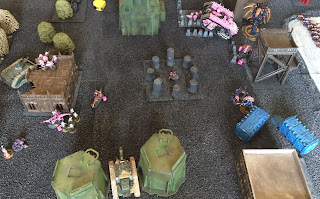 Turn 2 for the Emperor's Children. Vehicles shuffling at the top, while the cultists on the left advanced through the building towards my objective. The Sorcerer who was on the middle objective ran over to help the Lord, using Smite and the Chaos Familiar stratagem to swap a power for the Chaos kinda-smite power to try and kill the one Acolyte in combat with the Lord. I denied both powers, forcing the Lord to deal with the Acolyte in melee, though he let his steed do the work, licking the poor hybrid to death. Elsewhere the Sonic dread and the Spartan killed off the Hive Tyrant.

In my turn I claimed the central objective with the two Genestealers while the Patriarch went over to take out the second Noise dread. In the shooting phase the Leman Russ opened up on the wounded warlord, but only managed to reduce him to a single wound. I understand why Guard armies need to take so many tanks - they are just not reliable at all. Unlike the Patriarch who handled the dread after the Termagants went in to soak the overwatch. Speaking of overwatch - the Trygon charged into the Spartan again, and took a couple of lascannons to the face, and died. That was disappointing because the Spartan was pretty unhealthy and taking it out would have been a big blow. 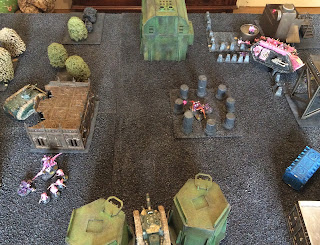 John's turn 3 and unsurprisingly the Spartan blasted the Patriarch to bits. The one wound Lord moved back to the centre to easily remove the two Genestealers and claim the objective. The Sorcerer and the Cultists on the bottom left killed off the Magus and remaining Neophytes to claim that objective as well. This gave John a commanding 7 points this turn for a total score of 11-4 in his favour. And that was pretty much that. We played another turn just to see, but my two remaining tanks were unable to kill the cultists that prevented me shooting at the characters, and in John's turn he would have reduced the Chimera to a single wound and removed my remaining 3 Termagants. In the end a solid victory for the Emperor's Children.

I was actually quite surprised by how close this game went, given that I was effectively relying on a good cult ambush roll to do most of my damage. This was the first time I'd used the GS Cult since the Grinding Advance change, and the first time I'd had access to the Chapter Approved stratagems. It was a nice little boost, but I still don't think the cult is in a good shape at the moment. Especially now that the big FAQ has removed their ability to ambush on turn one (which I didn't use in this game anyway). I think for them, as was with so many armies, it's a case of wait for the Codex.