Recently the Fiery Fowlers (Sponsored by Nan Doe's Spicy Chicken) took to the field on their home turf in the first game of a long term ladder league thing. This was both their first home game and their first game with real consequences - if a player dies, he dies! In the unlikely event that anyone does something notable enough to earn star player points, they might actually gain a useful skill, maybe.

After their first game against Dark Elves at the Taylored Games Stadium went somewhat badly, this time they picked on someone their own size, a Goblin team known as the Hokkar Loogies. Boasting a pair of trolls and a host of illegal weapons, the sneaky, slimy Loogies were a little surprised to find themselves playing the role of the faster, more heavily armoured team. 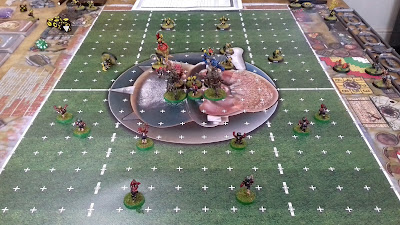 In perfect Bloodbowl weather we kicked off! The Fiery Fowlers receiving the ball first. 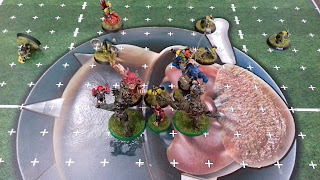 The middle of the pitch quickly turned into a big guy shoving match. The Treemen, Ash Oldvine and Rowan Greenleaf proved too strong for the Trolls (one of which looking suspiciously like a Minotaur) and attracted the attention of a fanatic and a chainsaw. 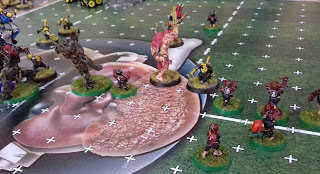 Mid way through the first half and the Halfling's tiny legs carry the ball nearly into the Goblin half! The Trees were doing good work in the middle, proving capable of both hitting things and standing up (a tough ask for a tree), but with a goblin out there bouncing around on a Squig (counting as a pogo stick) the Halfling cage around the ball was never going to be safe. 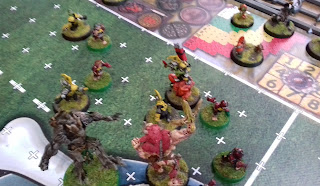 Sure enough that jumpy gobbo leaped right into the cage and messed everything up. He grabbed hold of the ball, and it fell to the captain, Piggy Beefteeth, to smack him with his trusty bottle for a KO. 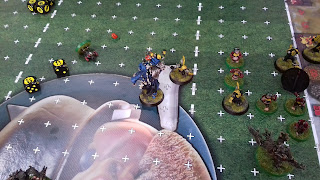 With time running out in the first half it was time to get the Halfling with the ball into the reach of a Treeman and throw him towards the end zone. The throw was good, but the landing wasn't - the double 6 was for the injury roll. The half ended 0-0. 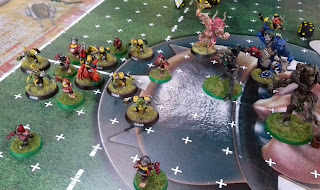 Second half and the pogo/squig rider goblin gets the ball again. There is a big mess of Stunty players dodging around each other to surround the ball, but blocks on the carrier are unsuccessful. Eventually the dodging failed for the Hokkar Loogies as one of the Goblins tripped and fell on a sharp rock (or possibly a stale baguette) killing himself instantly. 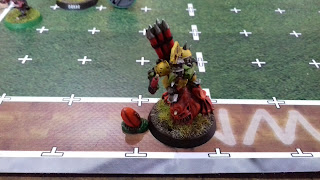 In spite of the set back the ball managed to make it to the end zone and the Goblins went 1-0 up. There were plenty of Halflings off the field at this stage, but with more lining up to get in on the after match feast, the Fiery Fowlers were able to field almost a full strength team for the last drive... 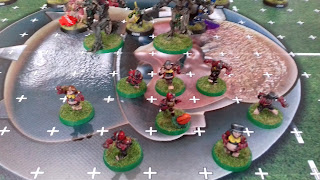 It's deep in the second half and the Halflings have the ball again. Not trusting their little legs to take them to the end zone, they caged up around the ball behind the Treemen, waiting for the opportunity to go airborne. 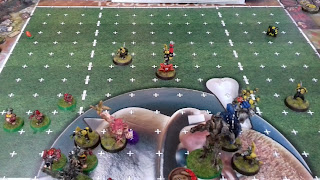 With Goblins and Trolls all over the pitch and Rowan Greenleaf falling over and refusing to get up, it turned to Ash Oldvine to make the throw. Once again it was a good one, but, as before, the Halfling landed on his head. 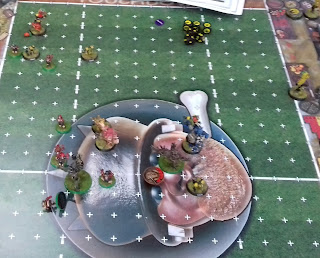 A last turn attempt to throw another 'fling at the ball carrier and into the end zone failed (the tree's fingers were obviously covered in slippery Goblin blood as he dropped the Halfling), leaving the final score 1-0 to the Hokkar Loogies.

A good, Halfling supporting crowd meant the Fiery Fowlers earned enough money to purchase a 4th reroll, and Rowan Greenleaf was awarded the MVP for squashing a Goblin. In training he later learned how to use his strength to break through opponent's puny tackle attempts. To add to the good news, only two of the Halflings suffered permanent, career threatening injuries! Captain Piggy Beefteeth developed a niggling injury, but he is a veteran campaigner and will soldier on! Gilbert Smoothands however managed to break something important (I think from landing on it) and suffered a reduction in strength (down to 1). A good day out was had by all! (Apart from that Goblin who died...)