Apparently SorcererDave enjoyed my company/box of tea enough that he invited me to come back! Tomorrow Hive Fleet Goliath will return to Morgan's Reach, where we will continue our narrative campaign against the Cadian 404th. The first game featured the Tyranids catching the Astra Militarum off guard (pun intended) with the aid of a Genestealer Cult and the sinister Magus who had been impersonating an Inquisitor. Now the Tyranid forces have started dropping down to the planet in large numbers, overrunning the hive cities and consuming all the delicious biomass held within. It will be up to the Cadians to fight their way into the ruins of the cities to take back the vital strategic locations from the Hive Mind!

Once again, I've written up a fun, thematic list for this mission. My primary concerns were to a) represent a mid stage Tyranid invasion force - swarms of Termagants and mid-sized bugs, and b) to fit the narrative so far. It comes to 1747 points and features a Jormungandr Battalion and a Genestealer Cult Patrol. 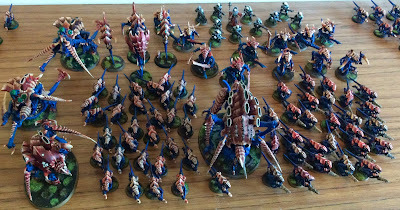 As you can see, I've brought back the Magus. He's been naughty, running around behind the scenes and causing all kind of problems for the defenders of the hive city. In my mind he plans to make his escape after the city has truly fallen, on to the last ship off the planet, so he can go and do it all again somewhere else. I wanted this narrative to be somewhat represented, so I've made him my warlord so that his death is worth a point in the game. 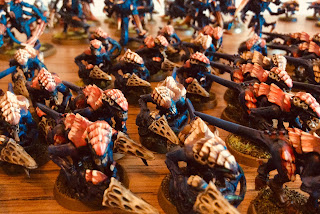 I've also brought along a bunch of freshly painted Termagants with devourers. These should prove very effective against Guardsmen, though they are fragile. To this end I intend to use the Jormungandr stratagem to have the Raveners dig a tunnel for them to arrive safely from. The Tervigon might also be in a position to buff them, and since it is narrative I could use a command points to bring them all back with a stratagem if they die. Assuming I haven't spent them all by then. 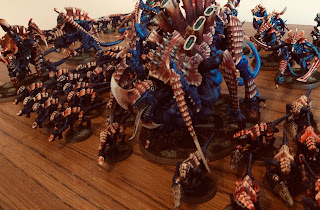 Speaking of Narrative, I've also packed two bonus units of 10 Termagants in case the Tervigon gets a chance to spawn them for free. If this sounds a bit mean, don't feel too bad. SorcererDave recently shared a picture of a couple of Hellhounds on the painting bench, so I think he had a good answer to Termagants! 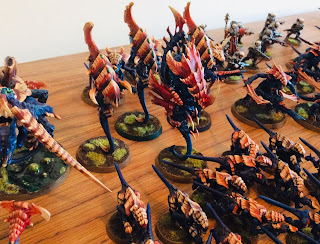 Speaking of being mean, I've brought along a Neurothrope and some Zoeys. Apparently I've got a bit of a reputation to uphold. With luck they will be turning it up to eleven! Hopefully there will also be good luck for Old One Eye and his Carnifexes. I've used him a few times and I've yet to have any success with him. So far he has repeatedly whiffed his attacks and just been squashed. We shall see how he goes. 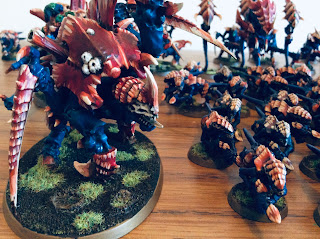 Hopefully, whatever happens, I'll be another fun game and a great battle report!