Hello!
I've not posted a lot of 40k content recently, as I've been working on Lizards and I've not played any games for obvious reasons (it's mid 2020 for anyone reading in the future). So I thought I'd fix that by digging through the old boxes and taking some photos. As you may know, the wife also paints toy soldiers, most notably the Sisters of Battle Order of the Azurine Heart. Back before then though, she started with Tyranids, the beautiful but deadly Hive Fleet Rosaceae... 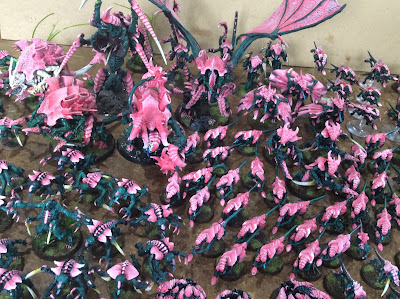 Before we delve a bit closer, let's have a look at the case that the little bugs were hiding in, because it is quite unique: 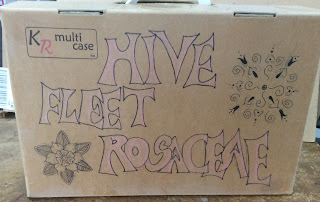 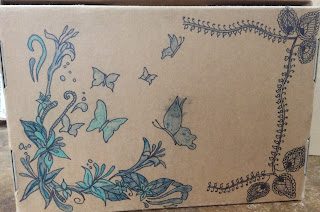 As you can tell, a lot of work was put into making this army a bit different. It's not just a striking scheme, there are loads of little conversions and quirks in here. 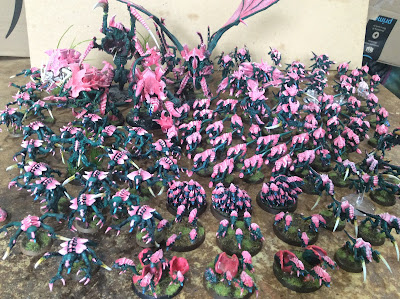 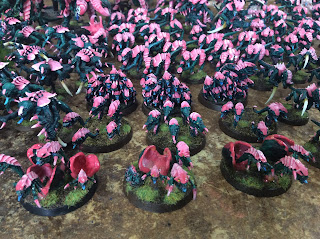 We've got some Forgeworld Rippers in there, both swarms and the individuals, sadly many of which have lost their little arms over the years. Here seen bursting out of their eggs, made from pistachio nut shells. They also serve as objective markers for the army. 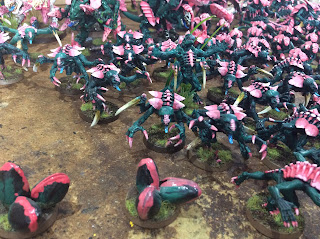 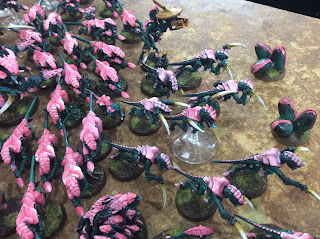 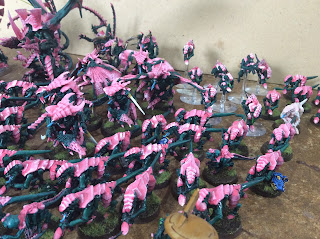 Lots of Genestealers (this army was mostly put together back in 4th edition, which was about the last time before 8th edition when Genestealers were good) and lots of gaunts. Some fun little additions here like the Hormgaunt catching a Tau drone, a couple of Rogue Trader era Termagants, an albino 'gant and the original 'gimmi a hug' broodlord. 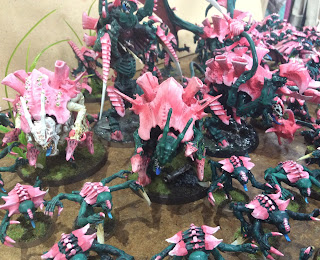 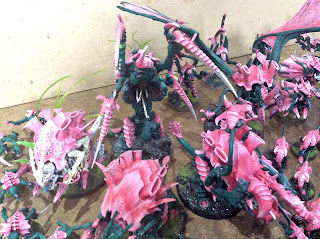 The monsters are similarly special, with the albino Carnifex, custom Wrecker-fex and Flying Tyrant, and the Screamer Killer standing tall to unleash his internal flesh hooks and display his, ahem, 'implant attack'. An impressive level of individuality, given only a few kits to work with. 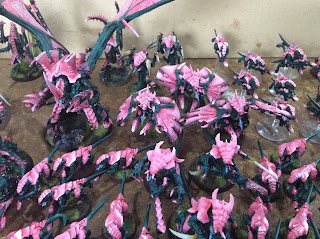 More Forgeworld in the Shrikes (flying warriors) equipped with double devourer, as was the best (and legal) option at the time. Accompanied by 'Rocket Gaunts' - the gargoyle kitbash that was somewhat popular before the plastic kit was released. Behind them, a pair of Raveners (they could be taken as individuals) and some Lictors.
That's pretty much it. In the day it represented a sizable chunk of the Tyranid range, and significantly more than 2000 points. Now it's missing a lot of the nid options and has a few units that are either under strength or have illegal loadouts, but I have to admit, having gotten them out on the table for the first time in years, I'd quite like to see them back on the battlefield one day. Perhaps I'll borrow them for a game sometime as allies of Hive Fleet Goliath?
Anyway, that's the army. Hope you enjoyed my little nostalgia trip, and I hope everyone is staying safe out there. Next time I'll be looking at more models from our collection of Chaos Daemons. 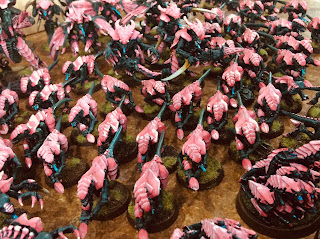 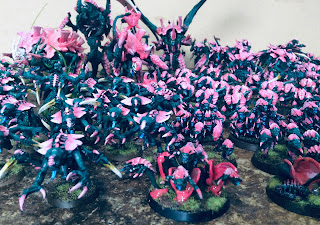