Yesterday I attended Double Trouble 3, a 40k randomised doubles event run by Alex Brown of the From The Fang blog and hosted by Element Games in Stockport. I had a great time, it was very much a ‘beer and pretzels’ event (except that I was driving - taking the scenic M62 over the Pennines was a nice bonus) with a wide array of thematic armies and people playing in the spirit of fun rather than cutthroat competition. 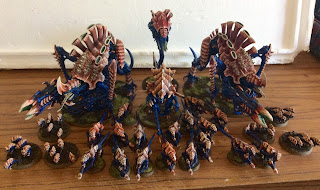 I took Tyranids, as covered here. I was pleased with their performance overall, they proved a pretty tough nut to crack and it was pretty scary when both Tyrannofexes got to double fire their Acid Sprays. I’ll not run down all my games here, instead I’ll make separate posts for each battle report to follow soon. However, I can reveal one of my Tyrannofexes did me proud in the painting competition. I ‘won’ the monster/vehicle category via having the second most votes after the reveal that the most votes went to a model that wasn’t painted by the player who entered it. I didn’t really have hopes of winning anything so I’m pretty happy with that and the £10 voucher that came with it. 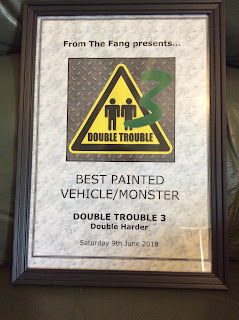 During the event I got to catch up a bit with Dave Weston, who runs the Confessions of a 40K Addict blog. Dave and I first met many years ago when we attended a doubles tournament at Warhammer World, after my initial partner dropped out and I asked for a replacement on a Tyranid forum. We promptly came second and were nominated for the best army award (you’ll see why if you click the link and look at his stuff). With that in mind I was secretly hoping I’d get teamed up with his rather beautiful, best army winning Genestealer Cult, it would have seemed quite appropriate, but sadly wasn’t to be. (Photo below shamelessly stolen from Dave’s blog.) 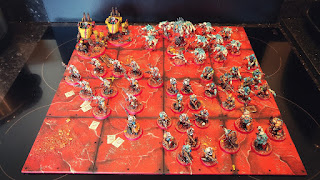 Overall I really enjoyed the day, the event was smoothly run, the venue was excellent and everyone I spoke to or played with were on top form. Sadly this may have been the last such event due to Alex selfishly deciding his family is more important than slaving away at organising events for strangers, however he is running one more as yet undecided event, which I think will be on the 1st of September. Hopefully I’ll be there!
Posted by Redtoof at 14:53