In the first game of the day, my Tyranids (Hive Tyrant, Malanthrope, 2x3 Ripper swarms, 17 Termagants and 2 Acid Spray Tyrannofexes) were joined by Christopher's Blood Ravens, using Imperial Fist chapter tactics, consisting of Gabriel Angelos, a jump pack Librarian, Vanguard Veterans with a mix of claws and hammers/shields, a Venerable Dreadnought with lascannon and a Redemptor Dreadnought with plasma.

On the other side of the table were Mark with World Eaters made up of Kharn, an Exalted Champion, 3 squads of Berserkers and 2 Rhinos, and David with a silver and yellow custom Chapter of Space Marines using the Crimson Fist rules, who took Primaris Captain and Lieutenant, 2 units of Intercessors, 1 Tactical Squad, 1 Hellblaster squad, 1 Sternguard squad and a Venerable Dread with all the autocannons. So my Jormungandr adaptation didn't have much of an effect this game.

We were next to a window on a lovely sunny day, so sadly most of the pictures ended up quite dark. Sorry! 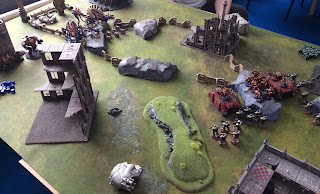 After deployment. Vanguard, Librarian and Ripper Swarms were off the board. I think Mark and David got first turn, but fair warning, I'm writing this at 4 in the morning so there is a fair chance I've gotten a bunch of stuff wrong... 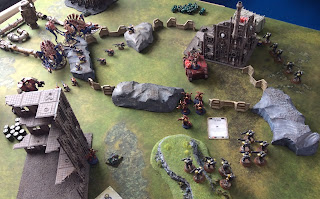 The Rhinos and Zerkers advanced up the board to claim the central objectives, while the marines moved into positions and plinked off some wounds here and there. In our turn the Termagants spread out to do screening stuff, while fire from the lascannon dread and the Hive Tyrant's Miasma Cannon popped one of the Rhinos. The World Eaters inside were promptly melted by one of the Tyrannofexes, leaving only the Exalted Champion. 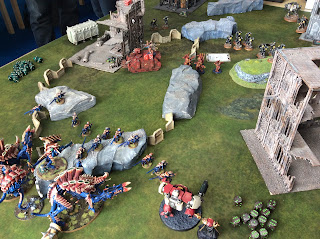 The Redemptor followed up by gutting the footslogging Berserkers, and the other Tyrannofex melted 9 wounds off the Rhino, leaving me ruing the fact that I had split off the fire from the stinger salvo to the Berserkers. In other news the two Ripper Swarm broods tunnelled up in our deployment zone on the two objectives, sitting behind walls to score them and be ignored all game. It was a decent start in terms of killing stuff but we were still under pressure from Kharn and chums, who were about to hit our lines. 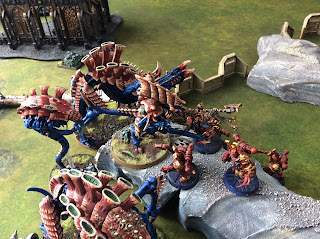 Predictably, Kharn and the remaining Berserkers charged and killed all the Termagants. They also declared a charge on the Hive Tyrant and thanks to fighting twice/use of the Fury of Khorne Stratagem made it into melee with him. On other parts of the board shooting had been largely ineffectual, though David's Space Marines had moved up to claim the middle objectives as well as his backfield ones. David's dice were poor all game, even though they were the totally-not-weighted Tabletop Tactics dice. Amusingly Mark's remaining rhino fixed itself back to 2 wounds, though not quite as amusing as his Champion charging the Redemptor dread and getting plasma'd to death on overwatch. 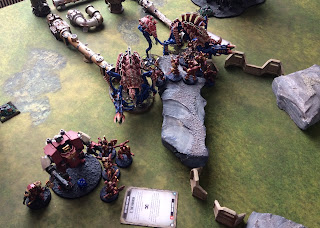 Kharn dropped the Tyrant to a couple of wounds and the Berserkers finished him off. They then piled into the Tyrannofexes to stop me melting them. 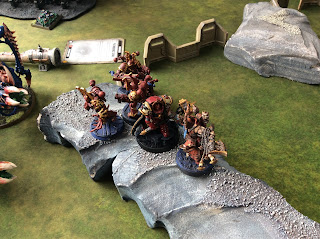 In our turn I reversed my remaining nids out of combat and had a nice sit down while Christopher did some stuff. The Vanguard and Librarian turned up on the edge of the board near the enemy deployment zone and in range to strike out at several units. The Venerable Dreadnought moved up to assist his now quite poorly Redemptor brother. Gabriel Angelos marched over to smash some heretics, though predictably Kharn Heroically Intervened. 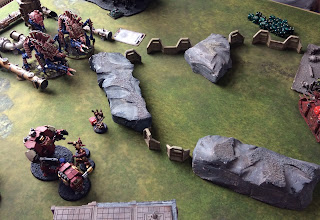 Gabriel killed off the Berserkers, but was splattered by Kharn, who took some mortal wounds for his efforts. Elsewhere the Vanguard and the Librarian failed their charges. 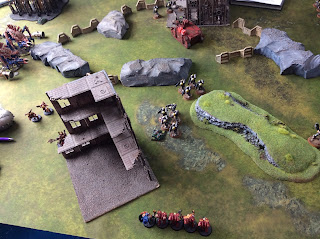 David's Marines poured fire into the beleaguered Vanguard on their turn while Kharn continued his rampage, charging and killing both of our dreadnoughts thanks to stat increases from his warlord trait (having killed Angelos) and Veterans of the Long War. 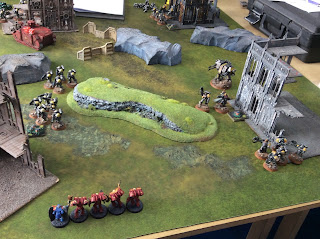 Christopher was rolling like the numbers 1 and 2 did not exist, and only a single Vanguard Veteran fell from the storm of bolter shots and plasma fire. 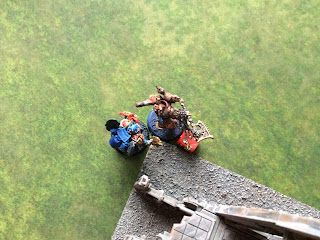 In our turn the Vanguard and the Librarian split to hunt the enemy leaders. The Librarian decided he could totally take Kharn, after smiting him and trying to kill him with a krak grenade to the face, while the Vanguard jetted off to threaten the Captain and Lieutenant. My Tyrannofexes started a slow march up the board, melting any Primaris marines that got to close, and finishing off the last two Berserkers with a Stinger Salvo. 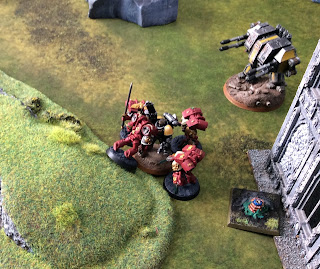 The Vanguard killed the captain and scored us a bonus objective, and in the main event the Librarian gave Kharn a good bop on the head with his staff, killing him with a command reroll on the damage! 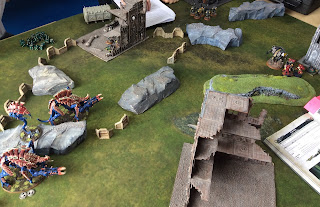 The last couple of turns involved David's marines charging into a grinding melee with the Vanguard Veterans, who eventually went down to the Lieutenant and the Venerable Dread's kicks. Mark's last Rhino finally died to overwatch trying to tie up a Tyrannofex, who did their job of removing a good chunk of the Primaris marines in the mid field. The game ended with the Librarian fighting the Lieutenant, I think killing him and surviving the game on one wound. Maybe. I didn't get any pictures of the very end, as would be a theme of the day the last few turns were pretty rushed, but we did manage to finish turn 6 and satisfyingly the game would have ended there event if we hadn't run out of time.

At the end, thanks to their aggressive start and mid game table presence Mark and David picked up 24 victory points to our 14, though, for pretty much the same reasons, Christopher and I came out ahead on blood points at 1497 to 1210. I was pleased with how the Tyranids performed, the Tyrannofexes were proving deadly and hard to shift under the cover of the Malanthrope's spore cloud. I think between them they took 5 wounds all game.

That was a really fun game full of epic moments, a great way to kick off the day. I think between us we had pretty much the spectrum from casual to competitive players and, as far as I could tell, we all had a great time.