Been working on those Armiger Warglaives. I thought I’d take photos of them at various stages so you could all see both how I did it and how’s much of a mess my table is. Along the way they will be accompanied by their big, fully painted brother, Camulus Of House Taranis. (Or he might be their uncle or grandfather or something...) 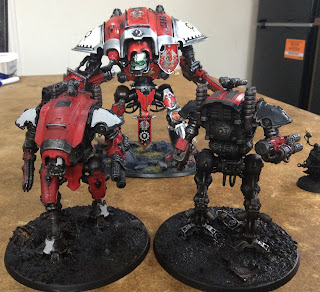 After the first evening of painting I’d given the ‘skeleton’ a few dry brushes and a wash, and whacked some base colours onto the carapace. Nothing fancy, but it’s a start. I know that it’s often recommended to paint the carapace sections separately and glue them on after the dry brushing is done, but I generally prefer to get it all put together so I can see better how it will look. 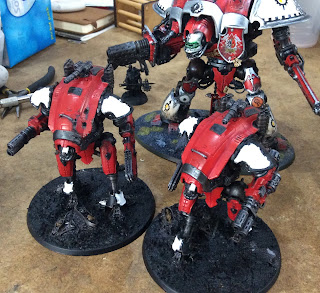 The second evening of painting was spent putting on many thin coats of white and building up the red. I’m using Vallejo paints for most of this, with the red it’s Scarlet Red working up to Bloody Red. 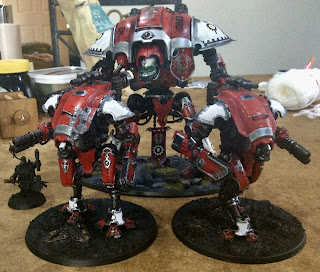 Most of the rest of the painting came yesterday. First steps were to build up the red some more, focusing on edges or raised areas, then do the trim and some of the battle damage. This stage was also the tidy up stage for some of the carapace induced mess. Gunmetal for the block colour of the trim and highlights on the skeleton, then highlights on the trim with a Gunmetal/Silver mix. 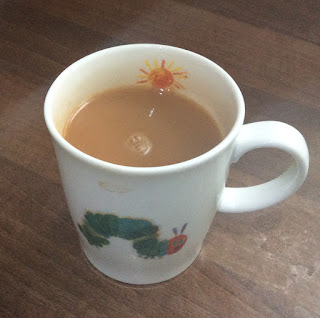 That was quite a tedious job so I had to have a cup of tea or two. 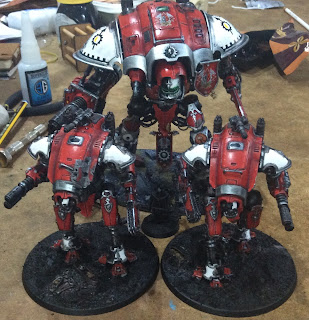 Nuln Oil wash applied to recesses in the carapace, the edge of the trim and ends of weapons etc. Final highlights on the red, a lightened Bloody Red around the edges. Also a bit of the ever fun Typhus Corrosion on the exhausts. This all really started to bring the models together for me, and signaled the last few stages. 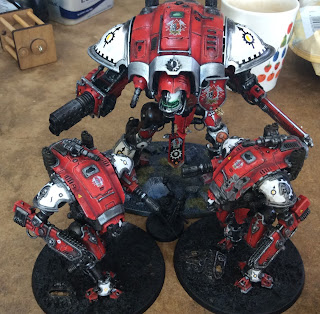 Transfers on! A bit of matt varnish over them as well, though I’m not sure it was required as I would be using Purity Seal at the end. (I’ve still got the dregs of a can to use up, I know the internet doesn’t seem to like it but it’s consistent with the rest of my Ad Mech.) Next step would be the fun and final bits - painting the base, weathering powders and glowy green bits. 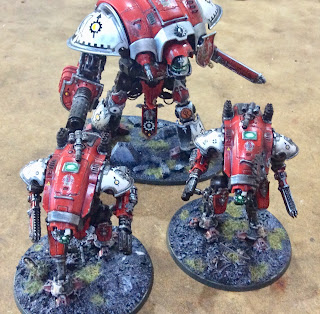 And here they are! All done. Really pleased with them, they match the big knight and I think probably look just a little bit better. I’m going to do a second blog post with more finished pictures, so keep an eye out for that one!