For the final game my Tyranids (Hive Tyrant, Malanthrope, Termagants, 2 Ripper broods, 2 Tyrannofexes) were teamed up with Ian’s fantastic Mad Max themed Orks, including a Warboss on a bike, boyz in a trukk, a deff rolla battlewagon, 5 rokkit buggies and 5 skorcha trakks. Ian’s army is so full of conversions and kit bashes he entered the entire thing in the conversion competition and scared off anyone else from entering! His battlewagon actually plays music as well so this game was accompanied by a soundtrack.

Our opponents were Greg with some possibly renegade Astra Militarum (Company commander, Psyker, 3 infantry squads, Leman Russ, 2 basilisks, a big unit of Bullgryns and an ogryn bodyguard with a relic for a 2+ invulnerable save) and James with some possibly loyalist Alpha Legion (Daemon Prince, Jump Pack Lord, 3 unit’s of cultists, a small unit of Berserkers and 2 unit’s of Oblitorators.) That’s a lot of bodies, a lot of guns, and a lot of command points! I thought we were definitely up against it in this game, outnumbered and outgunned, and with the corner deployment most of their heavy guns were tucked safely away from us. 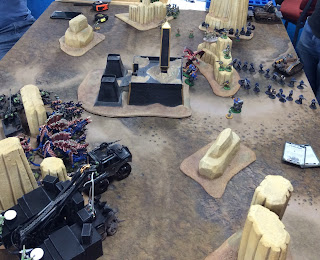 Deployment prior to the Berserkers being placed. Oblitorators off the board in the warp somewhere and basilisks right back in the far corner. We made a wedge with the nids as a central blob and Ork mobile units on either flank. The Rokkit buggies were off the board ready to ‘outflank’. 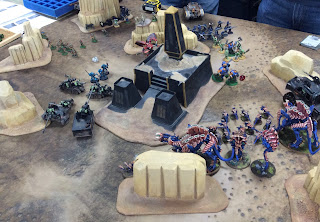 Our turn first and I didn’t have much to do, other than shuffle around and kill a few guardsmen. Acid Sprays we’re out of range and line of sight to the best targets. Ian retroactively scorched some Berserkers after James forgot to place them as forward operatives and they appeared mid turn instead. Ian’s Warboss and boyz charged ahead to fight the biggest, toughest things they could find. The boyz surrounded the invincible Ogryn Bodyguard, using objective secured to grab an objective, but didn’t little else. The Warboss however zoomed head first into the Bullgryns and decapitated two of them (Ian rolled three 6s to wound with the chapter approved relic, then did something like 8 mortal wounds) before getting beaten into the sand by the remainders. Epic! Thanks to backfield rippers and aggressive Orks we got 4 objectives this turn. 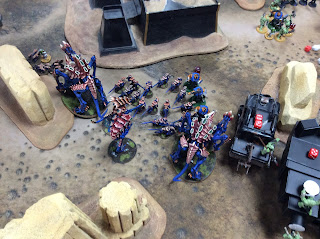 Retaliatory fire was relatively acceptable, Ian losing a few wounds off his trukk and battlewagon. On our flank the Prince and Berserkers charged the Skorchas, killing all but one. Bullgryns moves up and charged into my Termagants, who were not properly screening as they had to move out of the way of the Warboss. Pile in caught one of the Tyrannofexes in melee. This was a real problem. Elsewhere the   Ogryn and some cultists failed to dislodge the Boyz and take the objective. 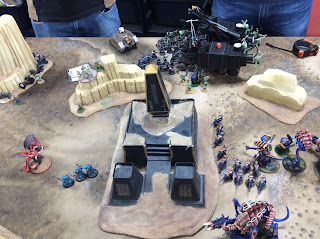 In our turn the Battlewagon moved up to charge in and cause mayhem. Rokkit buggies appeared to shoot the Russ, but were relatively ineffective. I disengaged from the Bullgryns and targeted them with a stationary Tyrannofex, only succeeding in melting one that was already injured. The Tyrant and the Malanthrope moved in to charge, but both whiffed and didn’t kill any of them! This was real bad! We still scored 4 objectives this turn though thanks to the boyz refusing to die. 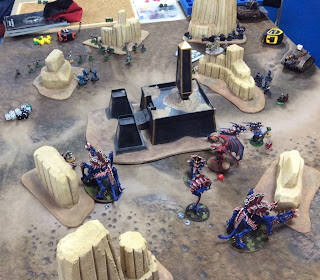 Missed a turn with the photos here. James brought the Oblitorators down on our flanks, had some good rolls to kill 4 out of 5 Rokkit buggies with them, and put some wounds on one of the Tyrannofexes. Combined with a barrage from the basilisks the Fex was down to 1 wound. Other shooting dropped Ian to just a damaged trukk on an objective, the last remaining boyz finally squashed by the Ogryn. James tried to Warp time the Prince over to help the Bullgryns but I denied with a double 6, forcing him to only kill some Termagants. This allowed the Hive Tyrant to counter attack and kill the Bullgryns before they could strike and finish off the Malanthrope.

In our turn we found that James had made a bit of an error as the Oblitorators were just within 18 inches of the stationary Tyrannofex on 1 wound. They melted. The other Tyrannofex cleared some guardsmen or cultists and thanks to an 11 super smite, the Tyrant beat up the Daemon Prince. 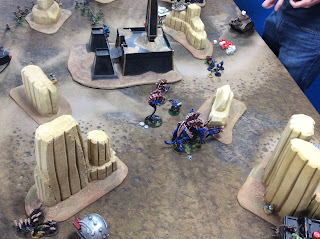 Artillery fire finally killed off the wounded Tyrannofex, while the second Oblitorators unit with the Lord next to them moved into position to kill the second fex. However James’ dice absolutely abandoned him and left it on a couple of wounds remaining. The Ogryn charged and killed the Malanthrope. 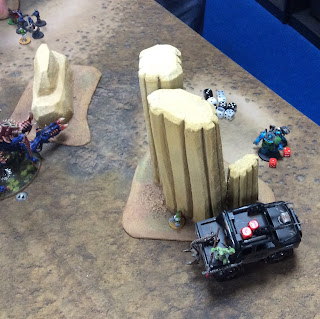 The last couple of turns are a bit of a blur. The Tyrannofex manages to melt all but one Oblitorators, Ian’s surviving trukk put 3 Wounds on the lord with a Rokkit to the face. The wounded Tyrannofexes took an entire shooting phase of big guns but thanks to the Jormungandr adaptation refused to die, even to the Ogryn in melee. 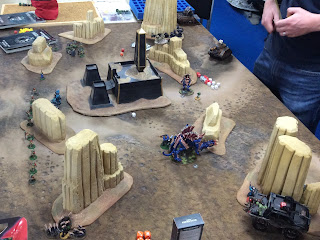 The Tyrannofex did eventually fall in the last turn as James and Greg were running for objectives and killing off Ripper Swarms to take them. The Tyrant killed off cultists and the psyker in our last turn, ending on an objective. Ian and I finished with one model remaining each but we had done some good damage and racked up a fair few points along the way. 16 victory points and 917 blood points for us, 17 and 1523 for them. A bit of a battering but a fun game and a good example of how tough those Tyranids can be, even though the Tyrannofexes fell eventually, they took an awful lot of firepower. 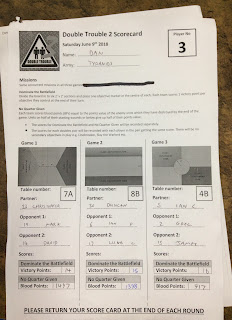 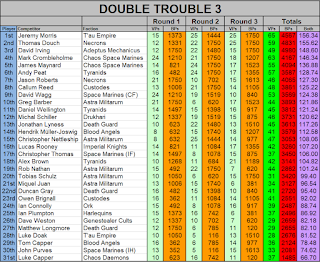 My scorecard and final results! 11 out of 31 in the combined scores, not bad! Just pipped to the top 10 by Greg, probably the difference in killing that last Oblitorator or another guard squad. I climb a few more places if you only consider Blood Points, which was my original goal with building this list - just kill stuff!

I’ll repeat what I’ve said before, I had a great time. All the games were a lot of fun and all my partners and opponents were good eggs, as far as I can tell. The event was very well run and if there were another one, say on September the 1st, I would definitely try to get to it!