Hello!
I recently played another game of Adeptus Mechanicus with The Claw (check out his Instagram and Fast Panda Gaming for his Infinity battle reports). Our most recent two battles have been smaller engagements fighting over Gate 7 - the entryway to an underground manufactorum on Esteban V, the spoils of war for two forces turned against the Imperium but also out of the Warmaster's gaze. In the first game the forces of Legio Mortis took the Gate for themselves, but in the second Legio Magna fought back to take over once more. Now the two Legios mass larger forces for a showdown on the desert wastes at the base of the mountains, where millions once looked up at the mighty forge entrance. 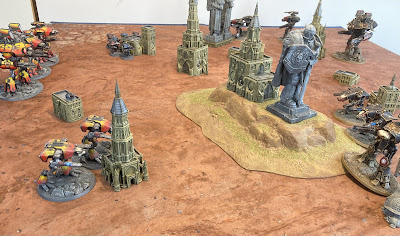 For this game we both went up to 2000 points, which feels more like a 'full' Titanicus force. Once again we were a bit too overwhelmed to play with stratagems, and used the matched play rules from the core book with the objective cards. 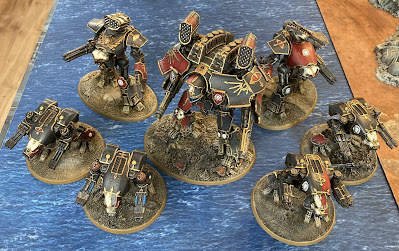 My forces were a classic Axiom Maniple, with an extra squadron of Warhounds to accompany them. A nice mix of weapons, I had a Warhound with each of the standard guns doubled up, Reavers with a mix of melee weapons and mid range guns, and the Princeps Senioris Warlord with the Bellicosa Volcano cannons and missiles. That came to 2000 points on the nose. 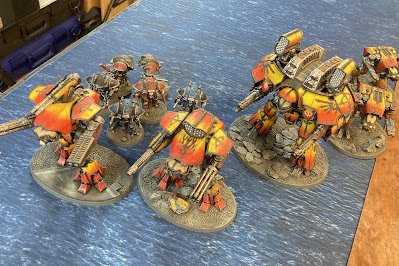 The Claw took a Fortis Heavy Maniple (who get bonuses for standing still and can combine shields like a Warhound squadron) with an assortment of guns on two Reavers and a Warlord, a squadron of Warhounds and a big banner of Knights. He was a bit under pointed on this but made it up with a whole load of useful upgrades, including abilities to pre measure for shooting, which was cool.
As mentioned, we picked from the mission cards. My objective was Hold the Line again, netting points for keeping enemy Titans out of my half of the board. The Claw got Glory and Honour, which awards points for killing the biggest enemy Titan as early as possible. 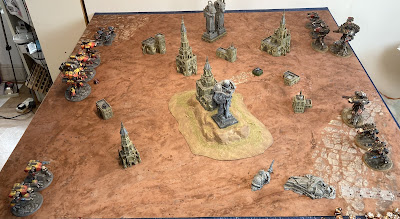 Deployment - we rolled a deployment type that had us split our forces into the four quarters of our deployment zones and designate them secretly. Predictably the Fortis maniple was dead centre, opposing my Warlord and split Reavers trying to find cover, while our faster units were on the flanks. 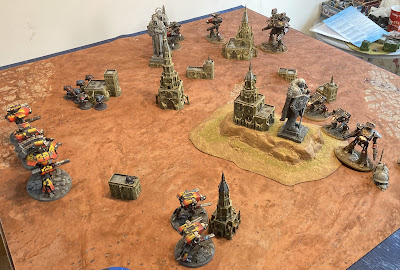 Turn one, I used Full Stride orders for most of my force to close ground and ideally get out of the arcs of the Fortis guns. There was some firing at my Warlord but the shields held admirably. I rather foolishly marched one of my Reavers up to right in front of the guns of both Warhounds - I'd forgotten quite how nasty plasma blastguns can be. Shields stripped and some critical damage.
In turn two I tried to move my Warhounds away from the smoking Reaver, but first fire orders on the enemy 'hounds caught it, and it went up... 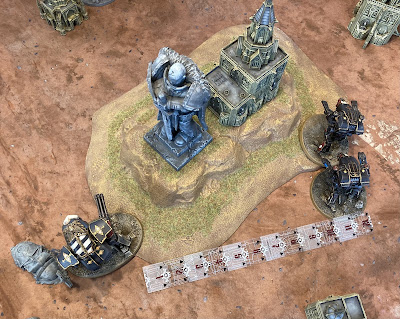 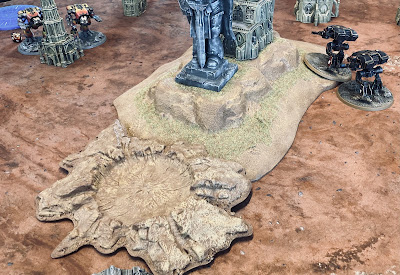 Big boom! Some shields lost and as a by product the Warhounds had edged into the Fortis' sights! 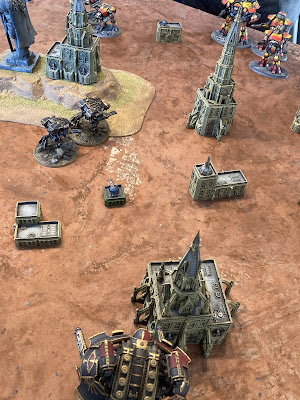 Speaking of getting into sights - my Warlord lined up to blast the weaker, faster enemy Titans rather than waste fire on the combined shields of two Reavers and a Warlord. Some heavy fire down that way but no major damage. 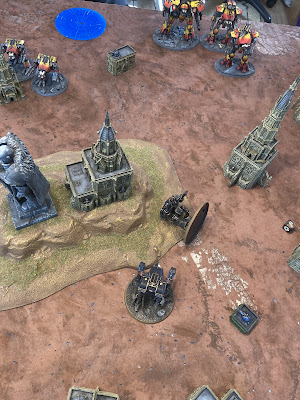 As predicted, the big guns targeted my Warhounds, dropping the flamer one. 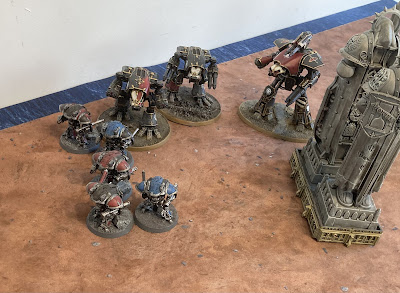 On the other flank the Knights clashed with my Warhounds and the other Reaver. They may be little but they are surprisingly tough with their combined Ion shields, so this was going to be a bit of a tarpit for a couple of turns. 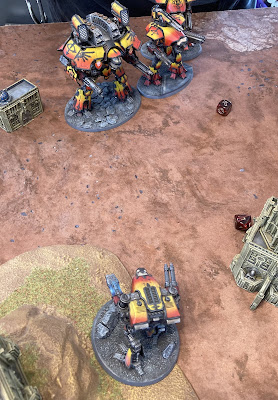 Turn three, the Magna Warhounds advanced up, but they were running hot and one of them suffered a significant reactor leak, which ended up with it spinning around and wild firing into the shields of it's bigger brothers as it fell. 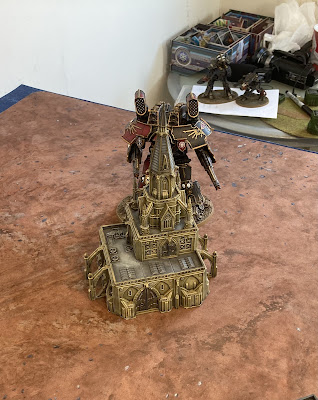 My Princeps Senioris showed the superior tactical mastery of Legio Mortis (and not cowardice) by hiding most of the Warlord's body behind a spire. From there he blasted away at the Fortis wall of shields with relative impunity. 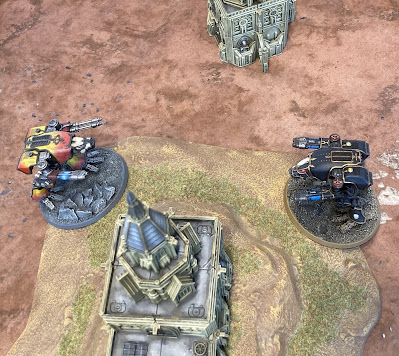 With two shieldless Warhounds left to contest the left flank, it was a straight up duel. Mine shot first, blasting the Magna engine with double, maximal plasma. 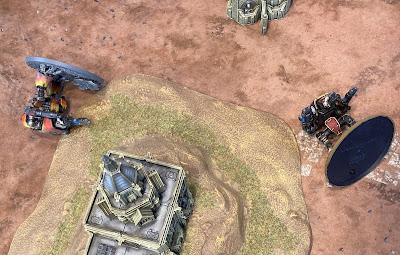 The Warhound fell, but it also wild fired, shooting directly forward with it's plasma and crippling my titan! Double KO! 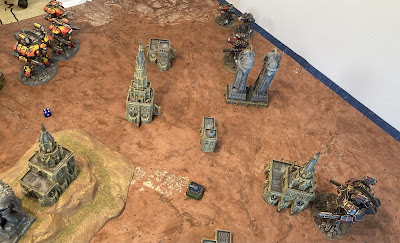 In turn four the left flank was completely destroyed for both forces, while my Reaver and 'hounds had taken the right. We blasted away at each other, taking some damage on my side (one of the Warhounds had a serious head injury, which I ignored for one turn with the Mortis ability) and finally stripping the shields off the Fortis maniple. With that however the game would reach it's end. 'Random game length' - or time to go home.
We left in an interesting position, both sides poising to launch a potentially killing blow, but ultimately the objectives heavily favoured a win for Mortis. Magna were penned back in and my Warlord remained standing.
Another fun game with plenty of silly explosions and reactor overloads. Worth noting The Claw had some serious trouble with his command checks in this game. Several failed orders and titans having their machine spirits take over! I think 2000 points felt about right for a 'decent' size game, I'd definitely be up for playing a similar set up again. I think now we've strung together a couple of games relatively close together it might be time to finally look at the stratagems or some different missions. The cards are... ok? They are a bit unbalanced I think and with only five you repeat them pretty often. I think it'd be fairer if both players played the same, or possibly if you got to pick one that suited your force. I'm sure The Claw's stationary gun battery Fortis maniple would have preferred to have the 'just kill stuff' objective.
Anyway, hope you enjoyed, and stay safe out there!
Posted by Redtoof at 19:10