Hello!
So about two weeks ago I played a role as an 'NPC' army in narrative, Crusade campaign run by Ed (from one of my first Death Guard games) at Grim Dice Tabletop Gaming. I was asked to run a 50 power level Ork force, so I took the opportunity of playing my first game with a new Ork Crusade. Apparently the background is that a big war has suddenly broken out on this backwater, unremarkable planet, and no one in the Imperium has quite figured out why so many forces have appeared - but it must be important, so they sent in their own. As far as I'm concerned, da boyz saw a big scrap going on and decided to join in! 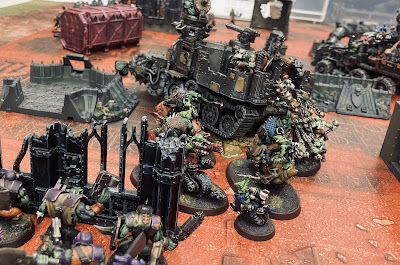 Anyway, I was up against an AdMech Ryza force, which of course I approved of. They had a pair of Onagers, a couple of Kastelan Robots, a bunch of small Skitarii troop units, Enginseer, Techno-archaeologist and two blobs of melee infantry - Infiltrators and Fulgurite priests.
Da Vipers tribe are propper Snakebites, though they aren't opposed to using a few bits of tech to get the job done - they'll just complain about it! My force was a mix of infantry (10 Slugga Boyz, 20 Shootas, 3 Meganobz), vehicles (Battlewagon and a Trukk), Snakebitey stuff (Weirdboy Durrork, Squighog Boyz and a Nob on Smasha Squig)  and of course Redtoof himself, who is a ded 'ard Warboss (Super Cybork Body and Brutal but Kunnin). Since both armies were starting Crusades we didn't have any funky upgrades. 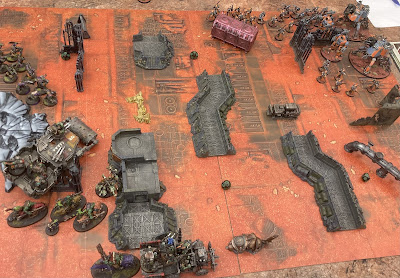 Deployment looked like this - the black d10s are objectives. Fairly open ground in terms of LoS, but a fair bit of cover and of course a nice small board. I don't remember all the agendas, but I do remember taking Krumpin' Spree for Redtoof to get points for killing units himself. There was also a special rule in effect for the campaign to not allow the reroll stratagem or I think the auto pass morale one, to encourage more use of your own flavourful strats. Fine by me since I'm rerolling charges anyway. 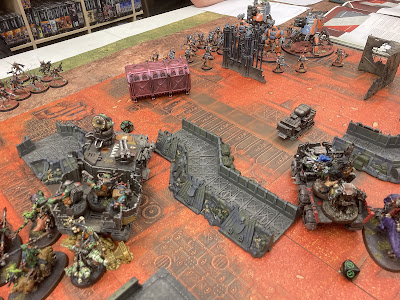 First turn went to the Orks, and we surged forward. Shootas in the wagon, Nobs and Boss in the Trukk. The Squigs hugged the backs of the vehicles for protection, while the Slugga Boyz held an objective. Lots of big shoota fire plinked off around five Skitarii, but then the return fire came...
Between plasmas, and Icarus array and the Robots' flamers, the Trukk got cracked open, and the Meganobz were reduced to one. This left Redtoof and the Smasha Squig in the open, and through the will of the dice it was decided the second Onager would fire everything at the Squig, blasting it off the table. To add insult to injury, the Meganob would proceed to fail morale and run away. 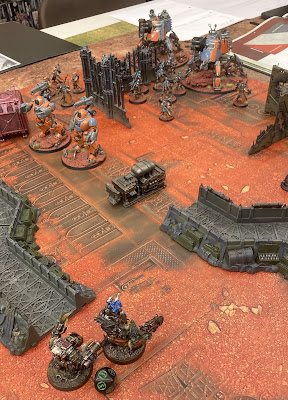 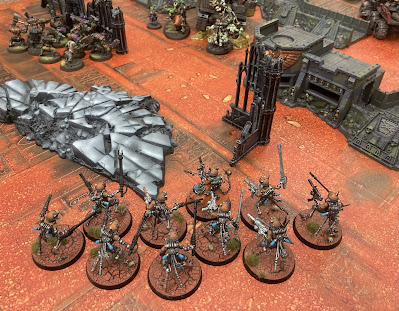 But that wasn't all, as the Infiltrators had arrived (I don't remember off the top of my head if turn one reserves is technically allowed in narrative play anymore, but for this game at least it was!) They spat some flechette rounds, then lanuched into melee with poor Durrork Orkorrah - who somehow proved not to be useless and survived!
Into turn two, and now it was on! WAAAGH!!! Redtoof made a beeline for the big shiny robots, supported by the wagon with it's Deffrolla. The Slugga Boyz turned to face the Infiltrators, while the Squighogs grunted their way up to some Skitarii. 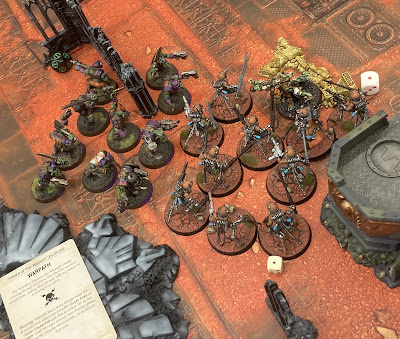 Some shooting from assorted big and little shootas did some damage, but the real damage was coming up... 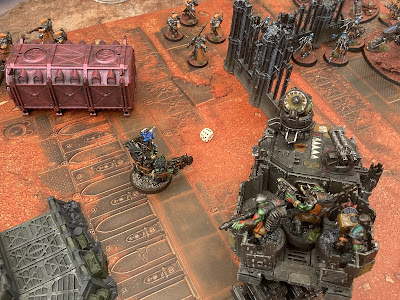 Redtoof made it in, and with a little help from some Ramming Speed mortal wounds by the Battlewagon, he tore down both Robots! That's why he's Da Boss! 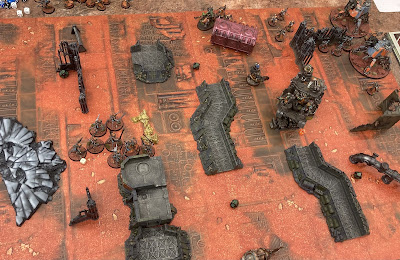 Elsewhere the Squighogs were reduced to one model, but made it into combat and butchered some Rangers. The Infiltrators interrupted and killed all ten Boyz and Durrork in a glorious display, though Orks is Never Beaten and he took a few of them down with him, swinging his force staff to good effect. 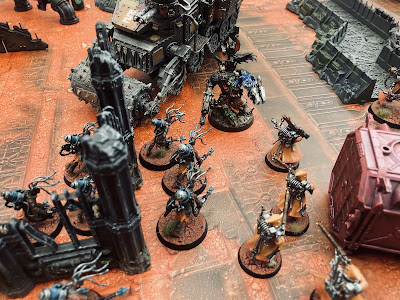 The AdMech response was to encircle Redtoof and go for the kill with the Priests, while the Onagers plinked fire off the Battlewagon.
"All I iz surrounded by iz fear, an' ded men!" 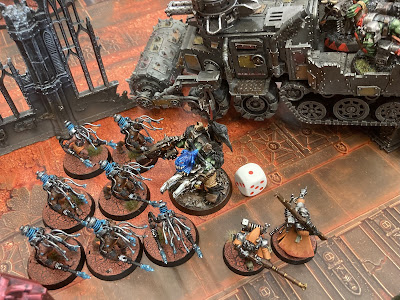 The Electro-priests dropped him all the way down to one wound... 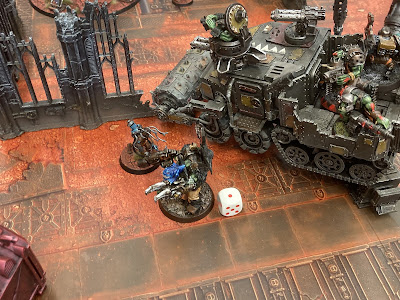 And he killed six of them in return, while his attack squig finished of the couple of Rangers who joined in! That priest then, wisely, ran away. 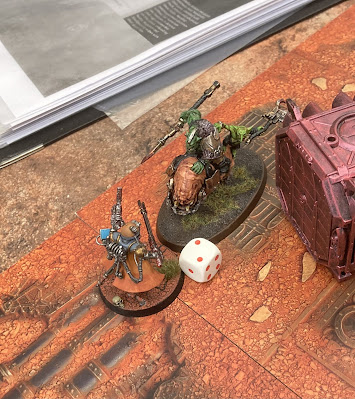 Elsewhere the Infiltrators charged the last Squighog Boy, but he interrupted and went into a bit of a frenzy, only leaving one alive! Turn 2 did not go so well for the forces of Ryza, and neither of us had many assets left. 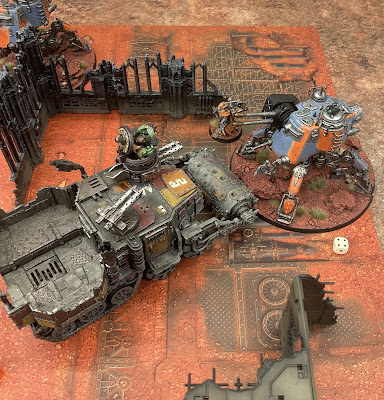 After that carnage we quickly raced through the last few turns. Redtoof attempted to charge an Onager, but failed and then got shredded by it's Icarus Array in return. The Battlewagon dumped it's Boyz onto a couple of objectives and charged the other Onager, which is where both stayed for the rest of the game, neither quite doing enough to finish the other.
Thanks to the Boyz on the objectives I picked up plenty of points to win the game and send the Ryza forces packing back into the ruins.
Really fun game, it was good to see the Orks take a battering but still fight back and ultimately win the day. As a result of this Redtoof levelled himself up, and being the WAAAGH-Boss, gained an extra wound. He also picked up the Ded' Ard Armour, a Crusade relic that grants +1 wound and +1 to armour saves, but he suffered a chest would, which reduced his wounds by one again. Durrork also suffered an injury, those taser goads giving him a deep concussion, meaning that he cannot use any stratagems.
I'm really hoping I can get in some more Crusade games with the Orks, but also the Death Guard and AdMech! Anyway, I hope you enjoyed reading, and stay safe!
Posted by Redtoof at 17:26